Hacking or Not, You Should Visit Russia & Here’s Why 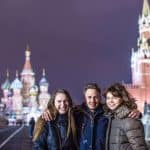 It’s been eight months since Donald Trump was inaugurated as President of the United States, and we still know very little about the extent to which Russia helped put him in office. This might seem unsurprising when you think about the pace at which Washington gets things done, but it was inconceivable to me eight […]