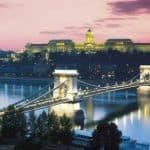 Budapest, Hungary has often been compared to the likes of Prague and Vienna, but I’ll let you in on a little secret, Budapest shines brighter than both of those.  A trip to Hungary means a trip to one of the many thermal hot springs that date back hundreds of years and a chance to take in some pretty […]