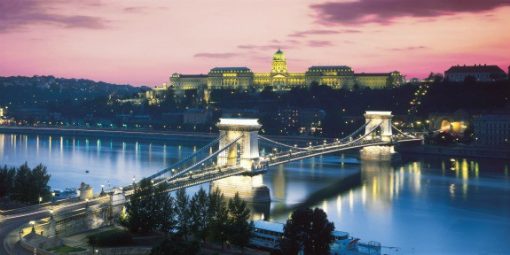 Budapest, Hungary has often been compared to the likes of Prague and Vienna, but I’ll let you in on a little secret, Budapest shines brighter than both of those.  A trip to Hungary means a trip to one of the many thermal hot springs that date back hundreds of years and a chance to take in some pretty amazing culture like Statue Park for example, where all the communist era statues have been collected.  Little restaurants and bistros sit on almost every corner if you;re looking for a satisfying Hungarian meal and while Hungary is a part of the EU, the dollar still goes far.

Translation; inexpensive. In fact, Budapest has all the qualities that make up the perfect European holiday.

One of the main draws of Budapest are the thermal baths; people have been visiting Budapest to take the waters since the 1500s.  While there are many spas in the city, I love the older ones – that old world charm and all. 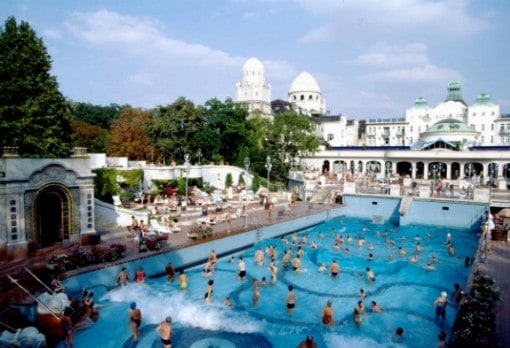 Gellert Spa is one of the best spas in Budapest, located in an Art Nouveau building mellowed by age since it’s been around since 1918.  With an open air wave pool and thermal pools of varying temperatures you can also get a medicinal massage if you want it.  But don’t expect a lot of pampering – this is a European spa and that means no warm and fuzzy moments.  Take a look inside the building anyway, even if you don’t have time for a stay, and notice the Art Nouveau furniture, colorful mosaics, marble towers, stained-glass windows and statues.  The entrance fee begins at $14.  Call ahead for a reservation.

NOTE: If you’re visiting Budapest with kids, you’re allowed to bring them to the spa, although their website suggests considering another more family-friendly spa first.

Rudas is located near Gellért Hill and the Danube’s Elizabeth Bridge and goes out all out with hot steam, a sauna that is divided into smaller pools that get hotter as you go.  If you’re tired after the experience spend some time in the relaxation room. The entrance fee here is about $15 depending on the exchange rate.

Play Up the History

Castle quarter on Castle Hill is a UNESCO World Heritage site and is a must stop for history buffs.  It was settled in the 13th century after a Tartar invasion and has somehow survived it all.  It has three churches, six museums and a number of historical buildings, streets and squares for visitors to enjoy.

St. Stephen’s Basilica is a veritable fortress and is the largest church in Budapest.  Construction began on the church in 1851 and was not complete until 1905.  It is a neo-classical building holding the greatest reliquary of the people of Hungary and including a mummified arm and Holy Right of King St. Stephen.  There are also some great artwork finds inside the church like the painting by Gyula Benczur of St. Stephen dedicating the country to the Virgin Mary and statues by world-renowned Alajos Stróbl.

Even with all the amazing history that makes up this city, one of the most moving places you will find yourself will be Heroes Square at the entrance to City Park.  From Andrassy Boulevard you can’t miss the high columns in the center of the Millennium memorial with a statue of the Archangel Gabriel holding the Hungarian Holy Crown and the double cross built in the 1800s to commemorate the 1000th anniversary of the when the Hungarians arrived in the Carpathian Basis.  This is one of the most visited sites in Budapest so it’s crowded, so be prepared.

For those interested in Hungary’s communist era there is Memento or Statue Park . In this park the statues from the communist era have been collected after they were torn down following the political changes in the country in 1989 and 1990.  You can see Lenin’s statue, the statue of Marx and Engels (which was once located in front of the headquarters of the communist party), and the Red Army’s statues that once stood as monuments of supposed heroic military duty.

You’ve Got to Sleep

Zara Boutique Hotel  is a perfect find because it sits right in the city center and is only 50 yards from the River Danube and just steps away from the famous Vaci Street with shopping, restaurants and also nearby public transportation.  It also houses the restaurant Araz, a big deal these days with its Hungarian and French cuisine and one heck of a modern kitchen with chef Aron Barka at the helm.

Kempinski Hotel Corvinus caters more to the business travelers and is a prime location with a first-rate spa.  The hotel is located near just about everything in the heart of Budapest.

Menza is a Budapest fave done up in cafeteria style, but the food is pure Hungarian and there is nothing cafeteria about that.  Think retro with orange, green and brown décor looking like the soviet canteens from the 70s and 80s.  Order the local faves such as soup or try the steak wrapped in bacon with eggs.

Dio this is another Hungarian favorite where you can find local goulash and choice meat selections.  Known as the place where Hungarian folk art motifs are unified in harmony with the fashionable features of modern, locals visit at lunch and tourists for dinner.  It’s right in the heart of the city near Sas Street.

The author’s trip to Budapest was sponsored by the Hungarian National Tourist Office.  The opinions expressed here are her own and Budapest is a city she adores.