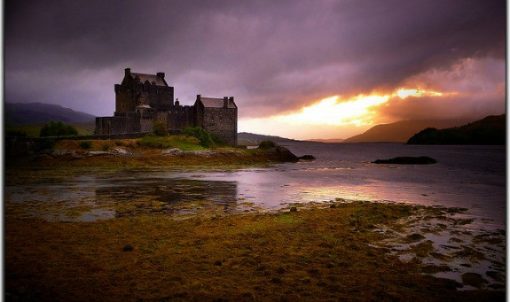 The British Isles have long been on my bucket list of travel destinations.  Not only the sights of Ireland, Scotland and Great Britian, but be immersed in the culture – I want to experience it all!  I recently had the opportunity to watch two productions that brought me one step closer.

Watching Brave, the newest Disney/Pixar feature released on DVD, I was able to delve into the heritage and legends that exist in Scotland.  As the story unfolds we see a young Scottish girl, attempting to fit into her role as princess. Much to the Queen’s dismay, she has a spirit that is as wild and as untamable as her massive head of flaming red, curly hair. Longing only for adventure and perfecting her skill at archery, Merida is devastated to learn that her parents have plans for her to marry, an act that they assure her will bring together warring clans.

Hoping to adjust her mother’s thinking, Merida seeks the aid of an absent-minded witch who conjures up a potion guaranteed to bring change.  Like so many other stories before, the potion doesn’t change the Queen’s mind, but instead physically changes her into a creature.  In this case a bear.  While protecting her mother from those that might harm her, together they seek to undo the potion’s spell.  Spending time with each other the two learn to see things from the others point of view and ultimately the entire situation is resolved.

The amazing details to animation are true to the style that we have grown to expect from Pixar with images so real we can almost smell the stench of the filthy clansmen.  References to Scottish culture include recounting legends, eating haggis, participating in games of strength and skill, wearing family tartans and what is or in this case, is not, worn underneath a kilt.

The second production that explored a bit of British culture was a live theatrical show, Billy Elliot The Musical.  Part of Broadway Across America’s touring presentations, Billy Elliot is a musical based on the hit film by the same name.  The story is set in a small mining town in England during a turbulent year that saw the community suffering through a labor strike at the mine.  As his rough older brother and father participate in the strike, young Billy must also deal with the loss of his mother and declining health of his grandmother.

Sent to a local club for boxing lessons, a twist of fate has Billy attending a ballet class.  What starts as a dare to participate in the class, turns into the revelation that Billy not only enjoys dancing but is very good as well.  Hiding the fact from that he has traded his boxing gloves for dancing shoes, Billy continues his lessons.  When the opportunity to audition for a professional dance school arises, Billy finds the courage to reveal his new found passion to his father. What begins as shock and anger turns into acceptance and the support of not only his family, but the entire community.

The dancing is quite stunning, especially considering the age of the cast.  The music for the musical was written by Sir Elton John.   While the music is certainly less peppy than Elton John’s other creations, he was dealing with some very non-musical subject matter.  Still, the song sung by Billy and the spirit of his mother was so tender and loving, it moved me to tears.

A bit of a warning, the characters in the performance are from a lower, working class and the language can be rather coarse. While many audience members around me were quite offended, I came to realize that the language depicts a cultural divide and added to the irony of a young boy’s participation in the graceful art of ballet.

While a true adventure to the British Isles still alludes me, watching these productions allowed me, if only for the night to experience a taste of the culture that awaits me.

NOTE:  The author was provided a complimentary copy of the DVD and tickets to the performance for the purpose of a review, the opinions expressed are strictly her own.