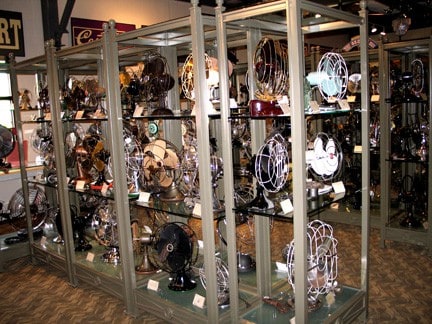 When I heard about the Antique Fan Museum, I imagined something like my grandmother’s attic with dusty old appliances stacked in boxes. This is more like a showroom, which is logical because it’s located in the same building as Fanimation, which manufactures all kinds of ceiling fans for homes, offices and anywhere else.

Fanimation’s founder, Tom Frampton, is a member of the Antique Fan Collectors Association, an organization of more than 500 aficionados. The group holds an annual convention, the Fan Fair (of course), which will be in Richmond, Virginia, this year from June 27-July 1, 2012.

The museum moved from Andover, Kansas, to Zionsville in 2009. According to the AFCA, it’s the only dedicated antique ceiling and desk fan museum open to the public in the world.

Each fan in the museum has been restored to pristine condition. All are labeled (some more completely than others), and many are on loan from AFCA members as well as from Fanimation’s own collection. Some hang from the ceiling or perch atop tall stands. Others are intended to be wall mounted, but most are displayed on glass shelves.

They’re arranged in roughly chronological order. The earliest I found was a Curtis & Crocker dating to 1886. It has six brass blades — and no safety cage. The signage says it was the company’s first fan, manufactured from 1886 to 1888, when electric power was standardized to 110 volts of Direct Current. 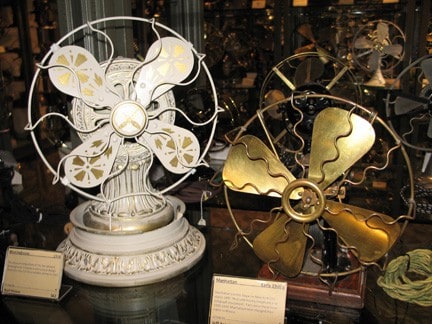 A few had two blades, or three. Others had four, five or six. Most of the blades were metal (with brass as the flashiest), but there seems to have been a fad in the late 1930s for fans with “safe” rubber blades.

Most were “standard” — that is, there was a base, a “post” holding the blades and some sort of cage. Others clearly were intended as novelties, such as a gray aluminum airplane with fan blades instead of propellers. Some were enclosed in elaborate wood cabinets, obviously intended to function as furniture as well as fans.

The range of manufacturers is large: I spotted Emerson, Westinghouse, Philco, General Electric, Tiche and Mathes.   I was surprised how many of the models I recognized: both my parents and my grandparents had owned more than a couple of those on display. 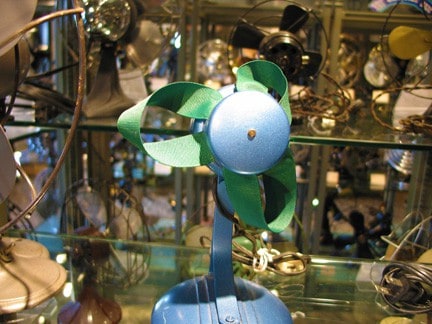 One fan that stuck out as a bit unusual was the Ribbonaire.  It’s a small blue number dating from the late 1940s that sports green ribbon loops instead of metal blades.

My favorite? A fan on a stand, taller than me, that’s operated with a foot pedal. Obviously it was for someone with a servant. The resulting breeze from the fan blades does not cool the person pumping away to turn the belt that operates the fan but points away at a 90-degree angle.

Location:  10983 Bennett Parkway, Zionsville, Indiana (map). There’s a separate door for the Antique Fan Museum, but unless there’s a special event, you’ll need to go in the main door for Fanimation.

Hours:  9 a.m. til 4 p.m. Mondays through Fridays (or make an appointment in advance).

The Antique Fan Museum isn’t the only quirky museum in the Hoosier state.

My personal favorite is the Ropkey Armor Museum (5649 East 150 North, Crawfordsville, Indiana).  Fred and Lani Ropkey showcase their extensive collection of United States tactical military vehicles. It all started with a Civil War pistol, but museum favorites these days are much larger (like Sherman tanks).

Also in Montgomery County is the Rotary Jail Museum (225 North Washington St, Crawfordsville, Indiana).  Built in 1882 as first of its kind the United States, it was in use by law enforcement until 1973. Sixteen cells in two tiers were rotated by a hand-crank so that just one door could be opened at a time. It’s now an art gallery and museum.

The Kinsey Institute for Research in Sex, Gender and Reproduction on the campus of Indiana University in Bloomington, Indiana houses an extensive collection spanning more than 2000 years of human history. Because of the subject matter, visitors to the gallery should be 18 or older.

In Portland, Indiana, you can stop by the Museum of the Soldier (510 East Arch Street).  Begun (and still run) by former soldiers who had been carrying military history items to school presentations, it opened: in a former Coca Cola bottling plant in 1997 to showcase their collections.