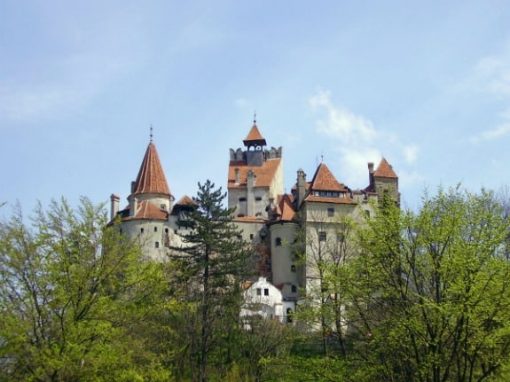 It’s easy to conjure up images of Dracula during the cool months surrounding Halloween, but did you know it’s easy to get to know Bram Stoker’s Dracula anytime of the year when you visit Romania.  With an aura of mystery surrounding the country’s Transylvania region, locals swear the spooky feel of the area is because it sits on one of the earth’s most powerful magnetic fields.  Apparently that’s what drew Stoker to write about the area too.

While Stoker’s Dracula really is just a loose legend that was inspired by a man named Vlad Tepes (nicknamed Vlad the Impaler and Count Dracula) it hasn’t stopped folks from making up stories.  Stories that are still whispered at restaurants and pubs even today – and the locals don’t mind telling those stories either.

Castle on the Hill

Sitting atop a 200-foot-high rock Bran Castle is the epitome of the story of Dracula.  Driving up to the imposing towers and turrets will definitely throw you back into another place and time. The castle was built in 1212, but today it holds a strong pull for fans of all things Dracula as it’s the castle Stoker used in his book.  It’s easy to tour the castle on your own, but expect to spend half the day and keep in mind there are always crowds.  For the most part you’ll wind through narrow staircases connecting over 50 rooms in the castle and then there is a chance to tour the underground passages.  Only one room in the castle actually highlights the myth of Dracula and it is dedicated to Bram Stoker presenting both the legend of Vlad Tepes and the myth of Dracula.

Even though the town of Sighisoara is 88 miles from Bran Castle, it is here that the heart of the Count Dracula legends really reside.  Sighisoara was founded in the 12th century by Transylvanian Saxons, but it’s Dracula that has put the town on the map with visitors.  Designated as a World Heritage Site by UNESCO, the town is full of cobbled streets and ornate churches and is the birthplace of Vlad Tepes or Vlad Dracula; the title translated to mean the son of Dracul.

Vlad was born in the town and ruled the area from 1456 to 1462.  You can still visit his birth home, although today it is a restaurant and museum.  The Vlad Dracul House is in Citadel Square, close to the Clock Tower, and is where he was born.   The ground floor of the house is a restaurant serving typical Romanian food for a fair price and is also home to the Museum of Weapons.  For Dracula aficionados the cobblestone streets are lined with souvenir shops offering all kinds of Dracula trinkets to take home.

In the town of Targoviste the 14th century Princely Court is still open to visitors, but just hope you aren’t invited to a celebratory feast.  This was the capital of the region Vlad ruled during his time and the Count was said to have impaled many a disloyal subject after first inviting them to a feastly celebration.  The nearby Chindiei Watchtower has a display that’s worth visiting highlighting the real life of Vlad Tepes (in case you want to go beyond the legend and find out who the man really was). 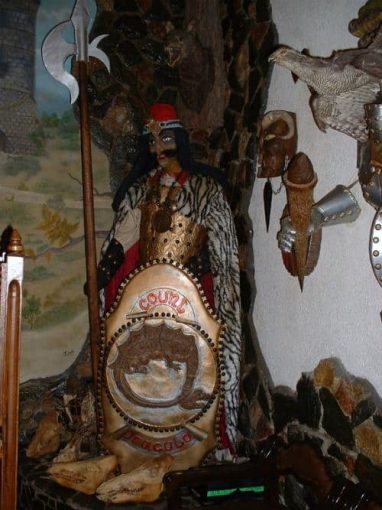 Snagov Monastery, according to legend at least, is where Vlad’s remains were buried and a plaque on the wall of the church indicates where his grave is located.  It’s a fairly time-consuming trip to visit the monastery however, as it’s located on an island and can only be accessed by boat. I opted to move on to the next Dracula legend instead of visiting, but the spooky 16th century monastery comes highly recommended by many Dracula seekers.   If you decide to visit, once you reach Snagov you will have to walk to the lake and then take a rowboat to get you to the church and grave.  Admission prices vary depending on the whim of the person at the monastery door. After all, Dracula is a moneymaker in this part of Romania.

While Bran Castle is the spooky haunt that inspired Stoker’s tale, it’s really Poenari Fortress that is considered to be the real Dracula’s Castle.  Located 108 miles northwest of Bucharest, the ruins of Poienari Fortress are all that is left today.  If you are up for climbing the 1,462 stairs, you’ll be able to see pieces of the walls and towers that are still standing as well as take in the views of the valley and the Arges River.

If you’ve read the book Dracula then you’ll remember the English character Jonathan Harker who ate a meal at the Golden Krone Hotel in Bistrita  on the eve of St. George’s Day.  You can do that too and sleep at what is called the Castle Dracula Hotel in Bistrita.  Yes, it’s as cheesy as it sounds, but if you’re looking for vampires and you’ve come this far, then you have to do it.  The Castle Dracula Hotel is not very old, but it is built on the Borgo Pass at the site of the fictional Count’s castle so it’s just one more way to live the legend.

Whether you believe in vampires or not, the locals still believe in the legends.  If you asked, many of them they will tell you that in this region of Romania there is still a strong belief that vampires frequent crossroads on St. George’s Day, April 23, and the eve of St. Andrew, November 29.

What should you believe? Well, it really is easy to start believing the stories.  Especially when you drive into the Carpathian Mountains and wind your way through the old forests and into the desolate mountain passes.  I know I didn’t want to get out of my car.