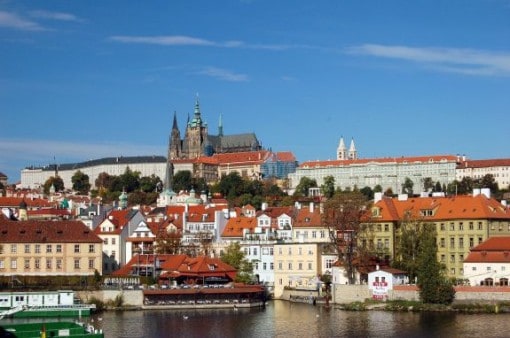 The only way to really explore Prague Castle in Prague, Czech Republic is to take a deep breath and dig in.  There are more than a dozen options of things to see within the castle walls.  After all, it is an 1100-year-old landmark so there’s a lot of history inside.  Got a day? Pick your favorite four or five exhibits. If you’ve got a week, well then, you just might be able to explore entire the realm of this stronghold. Czech food is tasty, so be sure to leave some time in your day for some culinary exploration, and remember, Prague travel prices are budget friendly.

Prague was originally founded in the 9th century and not far behind was the building of Prague Castle. The castle is not only the most popular tourist destination in the city but also the largest ancient castle in the world.   Starting as a wooden fortress Prague Castle has gone through a number of renovations over the years.  The original wooden building with a stone foundation wall eventually became a stone Romanesque palace in the early 12th century. The most prominent renovation was in the 18th century during the reign of Maria Theresa. Even today the Castle serves as the seat of the head of the Czech Republic.

With a host of places to explore within the castle the list is long:

The Story of the Castle The Story of Prague Castle is a permanent exhibition that allows visitors to glean a thousand years of history in one day.  The story of the main castle complex is also accompanied by information about the many rulers, presidents, aristocrats, courtiers, artists, architects and even the servants whose lives were entwined within daily life here.  The castle story also explores Prague Castles’ Czech crown jewels and the St. Vitus treasury.  The exhibition is located in the Old Royal Palace on the Gothic floor and you get there from the 3rd Courtyard or from St. George’s Square.

St. George’s Basilica was the second church built at Prague Castle, but today you’ll only see the foundations from that ancient time when it was founded.    For visitors now you’ll see a Romanesque church dating from the 1200s.  The highlights of the Basilica are the tombs of members of the Premyslid dynasty of princes inside the main nave.

There’s also a convent dating back to 973, but inside the style is from the early Baroque period.  You can gain access to the convent through St. Anne’s Chapel where inside is a permanent collection of 19th century art. It’s displayed in nine different sections and showcases the various individual artistic trends that document the lifestyle and tastes of the area during that era.

St. Vitus Cathedral is the largest temple in the City of Prague and it’s been the setting of many a Czech king and queen’s coronation.  The remains of a number of patron saints, sovereigns, noblemen and archbishops can also be found inside.  Once in you’ll discover a Neo-Gothic cathedral highlighting a main nave and narrow side aisles lined with chapels.  The beautiful bronze door depicts scenes from the history of the cathedral.

Located in the middle of St. Vitus Cathedral is St. Wenceslas’s Chapel worth a mention because of its decoration and architecture.  It is also the center point of the cathedral inside.  The wall paintings inside the chapel are of the Passion cycle and date from the 14th century. To get into St. Vitus Cathedral and the Chapel enter through the portal in the western facade, opposite the passageway between the Second and Third Courtyards.

The Many Gardens in the Castle

A visit to Prague Castle almost always includes experiencing the changing of the guards.  This takes place every hour near the castle gates and at noon daily there is also a flag ceremony in the First Courtyard. You can visit the castle on your own without a guide, but if you want a little help guides can be found at the Information Centers inside the Castle in the second and the third courtyard.

What else you need to know

The gardens are closed during the winter season, but during the summer season are open daily at 10 am with varying closing times.

There are a variety of ticket prices at Prague Castle depending on what you want to visit and how much time you have.

To get to Prague Castle there are several tram stops nearby; the Královský letohrádek, Pohořelec or the the Pražský hrad, which is also called No. 22 and most often used by visitors.  There are also two metro stations (Malostranská, Hradčanská).