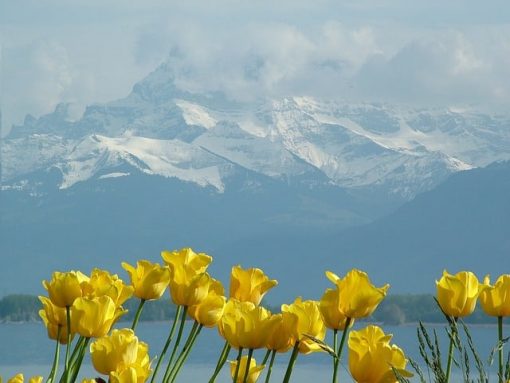 Switzerland is rife with scenic railway journeys. In the summer months the verdant pastures roll lusciously from the edge of the tracks into the horizon, while in the winter the country unfolds like a veritable Narnia. Suggestion:  Travel from Montreux to Interlaken on the Golden Pass Line.

This itinerary will have you rising up over Lake Geneva, with a chance to take in the wonder of the Swiss Riviera, traveling through a mountain tunnel, and coasting through resorts like Gstaad and Châteaux d’Oex. Hit the high point (over 4.000 feet) before Zweisimmen and snake through the Simme Valley. You may want to consider a stopover in Interlaken, then take a route to Europe’s highest railroad station at the summit of Jungfraujoch.

Norway in a Nutshell

This is a route with no off season time for travel. From the snow-dusted grounds of winter to the sparkling sun of summer, Norway in a nutshell combines the Bergen Railroad, the Flam railroad, the Aurlandsfjord, the Nærøyfjord and the Stalheimskleiva road.

Hard to pronounce, easier to enjoy, the route is possible in a day but turning it into a vacation with a night or two in Oslo is well worthwhile. From Oslo it is full steam ahead over the Flam railroad, descending deep into the fjord along the world’s steepest regular-track railroad. You drop over 2,000 feet in an hour as the panorama shifts from grand mountains to sparkling waterfalls. It’s a short journey, don’t take your eyes off the window.

Arrive at London’s Euston station after a days sight-seeing, doze off after a wee dram of whiskey, and wake up the next morning across the border. It is civilized, time-effective, and harks back to a different, more romantic era.

And then there is the scenery. Fall asleep traversing London’s suburbia and wake up seemingly in the middle of nowhere, the sun glinting through the blinds and deer bounding past the window. After exploring Fort William, the real treat begins. Often voted one of the world’s most picturesque rail journey, you will catch glimpses of crofter’s cottages, tiny churches, the pristine coastline, and deep green mountain panoramas, before crossing the Glenfinnan Viaduct famous for its starring role in the Harry Potter movies.

Catch the train from London to Brussels and change onto a high speed train to Cologne before crossing into Germany. Board a train winding down the Rhine Valley through luscious greenery to Koblenz, abundant with palaces, churches, fountains and old world charm. Cruise down the river or take a daytrip to historic Rudesheim, before heading up the Moselle.

The tracks are paved through the heart of the Rhineland-Palatinate and trace the river banks along the Moselle Stretch from Koblenz to Trier – Germany’s oldest city – which boasts a UNESCO-listed Cathedral and a picture perfect market square. After you have explored, continue on to the fairytale landscapes of Luxembourg to complete your itinerary.

Munich to Verona via the Brenner Pass

Combine some of Europe’s most stunning cities with rail travel as scenic as any Europe has to offer. The Bavarian capital of Munich plays host to every charming Alpine cliché imaginable, which of course means you will find the finest surrounding mountain passes. There are fast trains that will take you from here to the Austrian skiing capital of Innsbruck, but why sacrifice scenery if you have the time.

Instead, skirt around the bases of the Alps, meander past glittering lakes and glide through the resort town of Garmsich-Partenkirchen on the regional train instead. Lap up the snow dusted, mountainous views before taking to the tracks once more, this time past the vineyards and mountains of the Brenner pass to Verona.