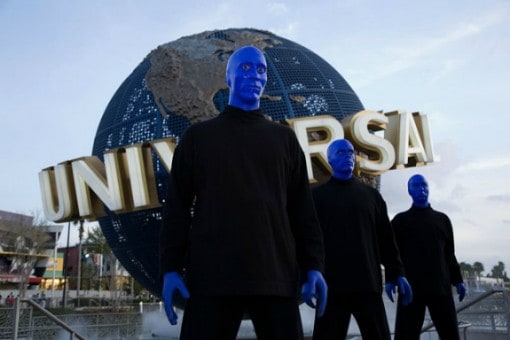 From live musical performances to stunt-heavy productions, Universal Orlando is home to a variety of shows but in my mind, there’s one in particular that stands out.

The Blue Man Group show at Universal CityWalk is a one-hour and 45 minute production that focuses on the theatrical antics of three bald, enigmatic characters who entertain their audiences with unique combinations of music, art, science humor and multimedia aids.  With a specific focus on percussion-related musical skills in particular, the all-blue performers communicate only through mysterious stares and random bodily gestures.  No words are ever spoken by the actors; not even when members of the audience are hand-picked to go on stage in order to be part of a skit.

Prior to our first visit to the facility, my wife was emphatic that we be in our seats before the scheduled start time of the show. As one who obsesses over punctuality, I was in complete agreement.

We arrived 15 minutes early and were instantly entertained by scrolling marquees on both sides of the theatre’s stage that periodically delivered what appeared to be humorously sarcastic and very specific messages to certain members of the audience, who were identified by name.

However, approximately 12 minutes into the actual show itself, I quickly realized why my wife had insisted that we not be the last ones to arrive that evening.

In the middle of an act that was supposed to climax with members of the Blue Man Group shooting a large, paint-filled balloon across stage via a heavy duty sling shot, the theatre’s auditorium lights came on, the performers stopped what they were doing and all three walked toward the front of the stage.

“You’re late” flashed repeatedly on the off-stage marquees, accompanied by music that was taunting in nature, and a spotlight followed a seemingly innocent couple as they hurriedly searched for their seats.

All the while, the Blue Man Group followed the couple’s every move with an expressionless stare. 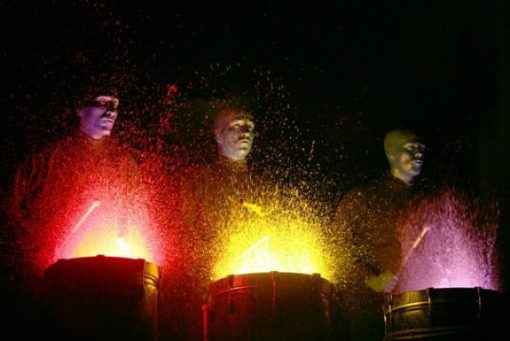 Even without an intermission, time passed quickly thanks to skits that involved the creation of art through paintball spitting, creativity with PVC pipes and the cross-stage shooting of multiple marshmallows into the mouth of one of the performers.

Sporadic music, both live and pre-recorded, is somewhat loud, at times, during the Blue Man Group show but the unusually-hilarious production is appropriate for virtually any age.

Things to Know Before You Go 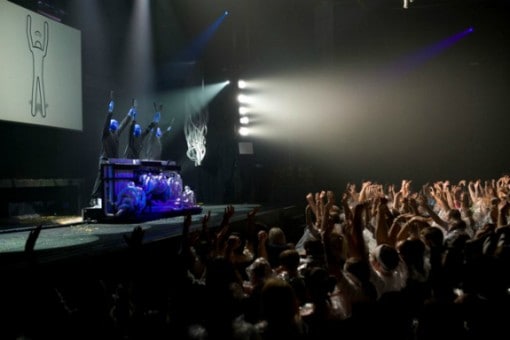