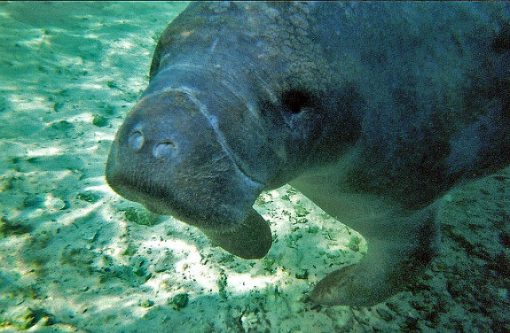 When the weather and water temperatures begin to drop, the Crystal River/Kings Bay area of Florida becomes the winter home of nearly 400 West Indian Manatees.  Manatees  prefer slow moving rivers,  canals and coastal areas where vegetation and sea grass flourish, apparently why they’re drawn to the natural springs of the Crystal River where the water temperature is at a constant 72 degrees.

Because of the high volume of manatees in Florida’s Citrus County, manatee tours become extremely popular from October through March, with some sightings stretching into April. With their gentle nature, many adventure tours, like Captain Mike’s Sunshine River Tours, allow guests to swim alongside these creatures.  On a recent vacation, I was one of those swimmers and it was an encounter I will long remember.

Though tours are offered several times daily, our adventure began before dawn.  The captain and guide of our tour boat met us at the dock and welcomed us aboard.  It bears repeating that the water temperature is a delightful 72 degrees if you are a manatee, however that’s slightly chilly for us humans. I was handed a wetsuit that the Captain deemed in my size and shown to a “dressing room” which was basically a shower curtain draped the width of the boat.   An instantaneous panic attack came over me as I feared the humiliation I would soon endure as I attempted to mold myself into this neoprene garment.  Amazingly, the snug fitting garment was rather comfortable and warm in the pre-dawn chill.

Waddling to my seat, I  joined the other early morning adventurers for a briefing about what we should expect and how we were to conduct ourselves during our encounters with the manatee.  We were instructed to float on the top of the water, arms outstretched, legs behind us (a sort of “dead-man’s” float), lying motionless waiting for the manatees to swim into view.  All swimmers are instructed ABSOLUTELY NOT to reach out or touch the manatee in any way and that any encounter with humans should be initiated by the manatee.  Failure to abide by this rule is considered harassment of these gentle creatures.

With our briefing complete, the sun beginning to break, and it’s time to head on our way down the river.  En route, our captain and guide share some additional facts and information:

Having the appearance of a large seal, Florida Manatees actually share a common ancestor with elephants and can grow up to 13 feet long and weigh over 3,000 pounds.  You would think that something this large would be very easy to spot, however their thick gray-brown skin can easily blend in with the sometimes murky river water.  This means it is very important for swimmers to maintain their floating posture and not stir up the shallow water while searching.  This tip that will be repeated quite often by your guide. 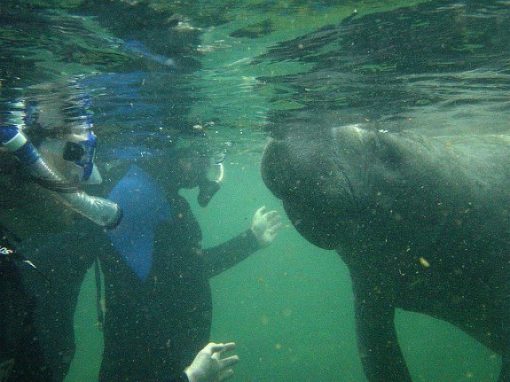 Manatees have excellent hearing, requiring swimmers to keep their voices low and calm so as not to scare them away.  Whispering is essential and easier said than done when the chilly water first enters your wetsuit!  Swimmers will also want to keep their ears open, as manatees, also known as “sea-cows”, emit a squeak or squeal as a way of communicating, particularly between an adult and calf.

As I masterfully, according to our guide, floated, I felt a bump and turned to see a manatee gently tapping my foot.  My husband was nudged twice, lengthwise, by a large cow and at one point the two were literally nose to nose.  In another location, our daughter was witness to what our guide states was a rare, but truly natural occurrence, as two manatee engaged in, shall we say, a romantic moment

While this is a family experience, before signing up the entire clan, I would highly recommend you consider the age and swimming ability of the participants.  Although the river water is shallow and life jackets are provided, parents and grandparents will want to enjoy the experience themselves and not be worried about inexperienced swimmers, or worse – spend the adventure on the boat with a child who is afraid to enter the water.  Though I must admit, I spotted more manatees from my vantage point on the boat as opposed to in the water, the ultimate experience is not the same.

I also suggest participants bring towels and comfortable warm dry clothes for after your swim.  I wore my bathing suit under a sweat suit, so  a word to the wise – don’t forget dry undies.  Though our provided masks and snorkels were disinfected, germ conscience individuals might want to bring their own.  As another tip, it would be best to practice breathing out of a snorkel prior to the excursion and although I had purchased water shoes for this experience, since  you are instructed not to put your feet down on the river bottom, I would forgo this in the future.

There is a debate that rages among animal lovers in Florida, a worry that encounters with humans has the potential for not only harassment of these threatened creatures, but that it can also affect their breeding behaviors  – though I believe my daughter would beg to differ!   Following the rules of engagement, I came away with  not only fabulous memories of our adventure, but a true love of manatees and a renewed concern for their conservation.

2 thoughts on “Swimming With Manatees”