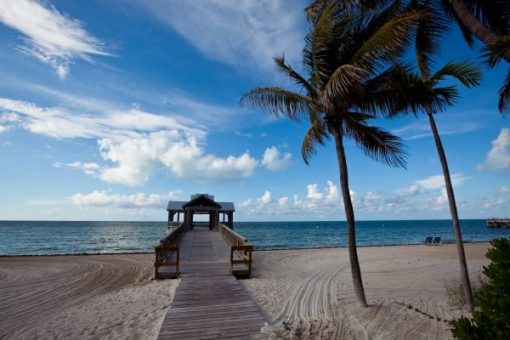 The drive along Highway 1 from Miami to Key West is a classic American road trip, and Anthony and I were eager to give it a go when we found ourselves in Florida.  The drive is incredible, covering 100 tiny islands, 42 bridges and one long open road!  The road itself is also something to marvel at – miles and miles of concrete road stretched over turquoise waters.  While driving along this road, looking either left or right you’ll see an endless expanse of water, giving Highway 1 the nickname of “Overseas Highway”.

Starting in Miami, the drive is 150 miles, with 112 of those being on the Overseas Highway, and if there ever was a time to rent a convertible for a road trip, then this would be it.  While Key West can be reached in about 3 1/2 hours, the real beauty of this trip is to take it slow and stop at some of the smaller Key towns along the way.

There are five regions in the Keys, those being Key Largo, Islamorada, Marathon, Big Pine Key and lastly Key West. Each has their own distinct feel, charm and character.

Key Largo is the first town of the Florida Keys, as it is at the northernmost point of the Keys. Probably the best thing about Key Largo is that it adjoins the Everglades National Park along the southeast border. This is the spot where the salt water from Florida Bay mixes with the freshwater from the Everglades, and this is where several eco-tours can be arranged.  Consider the option of kayaking, canoeing or just taking a boat ride through the many tiny creeks.  If you’re feeling really adventures, multi-day trips can be planned kayak all the way out to the Flamingo Visitors Center, the outpost where the Everglades meet the sea.

For something a little less active, that will still give you a chance to discover the varied wildlife in Key Largo, a visit to the 5-acre Wild Bird Center is a great eco-option.  . There are many native and migratory birds living here who, although rehabilitated, cannot be released into the wild. As you stroll along the wooden pathways that cover the park, you have the chance to see many of these birds.

Heading further on-wards throughout the Keys, is Islamorada. Comprised of six islands, it is the only place in North America were there is a coral barrier reef.  The islands sit between the water of the Everglades National Park and the Florida Straits.

Islamorada is also the self-proclaimed sports fishing capital of the world.  So if you love to fish, then this is your place. Hire a charter boat and try your luck at catching the dolphin fish (mahi mahi) or make your way through the shallower waters finding some of the more elusive fish.

If fishing isn’t really your thing, then taking tours through the various islands that make up Islamorada is well worth it. In particular Lignumvitae Key – only reachable by boat – offers you a chance to stroll through the tropical forest and see the island that the 20th century settlers called home. The Matheson House, built in 1919 can still be viewed today. A little further on you will reach Marathon, the starting point of the Lower Keys region and also where the famous Seven Mile Bridge begins.  The Seven Mile Bridge was definitely our favorite section. We had seen it in so many movies over the years and were eager to drive across it ourselves. Later we found out that it is the largest segmental bridge in the world.

The current Seven Mile Bridge was rebuilt to replace the old railroad/bridge, now open to pedestrians to walk along it at either end and take in the ocean view. Don’t pass up the chance to stop at the smaller island below. The island, called Pigeon Key, was where workers who built the original bridge used to live.  It has been largely left unchanged. There is a museum on site and tours are available to view life of the early 20th century.

Before reaching Key West a stop at Bahia Honda State Park is perfect to for a quick swim and some lunch. The best part? The park is free!

A little further on and the backwaters Big Pine Key are also great to explore by renting a kayak or motorboat to visit some of the deserted islands. The Looe Key National Marine Sanctuary has some of the best shallow dive experiences where there are some great coral formations.

If you love bird watching, then a stop at the Great White Heron National Wildlife Refuge is a must. The Great White Heron, the largest wading bird in America, is only found in the Florida Keys and the South Florida mainland. Kayak tours are available as well as shallow fishing boats that go out into the refuge to spot these large birds.

Before you know it you will have reached the end of the line: Key West.

The Old Town has maintained much of its 19th century charm through its architecture and it’s easy to get around on foot or by bicycle. Many of the houses have been restored to their former glory with bright colors and lush tropical gardens.

While in Key West you you can get a photo at the southernmost point in the continental US.  There will probably be a line up.  Did you know Key West is only only 90 miles from Cuba? Also, drop in to famous author Ernest Hemmingway’s old house which is now a museum and wander through where he  called home for almost a decade. At sunset approaches, gather at Mallory Square, where each evening there is a mixture of performers from jugglers to fire eaters. There are also food vendors around to keep you well fed at the sunset festivities.

While we did enjoy our time in Key West, for us the beauty of the Florida Keys was not any of the particular destinations but rather the journey along the way. Driving slowly and happily along the road, iPod plugged in with some of our favorite music, it was a perfect short road trip.

If you plan on heading down to the Keys on the Overseas Highway, reserve yourself a convertible and point south, stopping whenever and wherever you like.  Don’t bother with a GPS there’s only one way you can go!

Elise Reeks makes up one half of Positive World Travel and enjoys sharing her experiences with all who will listen.Her top three travel destinations are Vietnam, Nepal and Borneo.You can follow her travel musings at Facebook