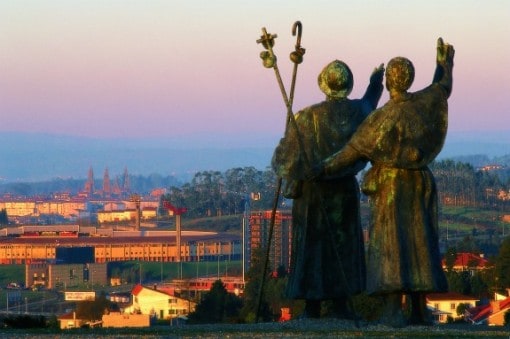 While many folks have heard of the Road to Santiago and it’s a to-do on many a  bucket list, the truth is that unless you have a lot of time on your hands you will likely not do the roughly 500-mile stretch of road in one trip.  Instead you might do it stages over the course of a lifetime.

The trek is undertaken by pilgrims.  For many pilgrims it means beginning the journey, ending it at a certain point say 25 miles down the road and then coming back a few years later to pick up where you left off.

It is a spiritual experience on many levels and no one person can say exactly why.  It is different for everyone. The only common denominator is the final destination, which is the legendary city of Santiago de Compostela where there are supposedly bones buried under the church located in the square.

Where for me is where the mystery begins.

What is the Road to Santiago all about?

During my trips to Europe over the years I have weaved in and out of the towns that play a big part in this road, which begins in France and ends in Spain’s Galicia area.  Not being particularly religious, when I decided to head to Galicia, I decided to uncover what I could about the pre-Christian roots in this part of Spain.

By pre-Christian I mean the pagan roots, and I had been assured that all of this was definitely present and alive well before Christianity began in this part of the world.

The bones might have even been buried long before too.

About 99 percent of the time, the excitement regarding the Road to Santiago is always all about religion.  So don’t get me wrong – I had just particularly become interested in the bones that were said to be buried under the church from the pagan angle because I did not believe these were the bones of a saint, but of someone buried there long before these bones were named.

The history of Santiago began on July 25, 813 when an unrecognizable-named bishop confirmed the discovery of the sepulchre of the Apostle of St. James in the village of San Fiz de Solovio, now Compostela.  A great basilica was built over these bones and since that time other buildings have been built up around the original building, thus making it a real masterpiece.

Such a masterpiece in fact, that, the capital of the province of Galicia is a UNESCO World Heritage City.  And, of course, it is also the final destination on the Road to Santiago where folks from around the world end up at this cathedral to view St. James’ relics.

Is it really St James’ relics.  Many a local I asked said “it’s not about whether it’s really his bones, but that you believe it is”.  But it it’s not St James, whose bones are they?  That question was never answered properly for me.

The Road to Santiago route itself has a number of options in order to get you to the final destination. The most popular route is the Camino Francés or the French Way, also called the Ruta de las Estrellas or the Way of the Stars.

This route begins in Saint Jean Pied de Port on the French side of the Pyrenees and from there you travel roughly 500 miles following yellow arrows and scallop shell markers to the final city of Santiago de Compostela.

The Road, and the experience of walking it, means more these days than the final destination. It’s about the journey as you trek over dirt roads around mountains, cathedrals, bridges, and monasteries with many a legend intact as well.  Walking the Camino Frances takes about 35 days at a pace of roughly 15 miles per day.

There are other route options that are shorter than the popular Camino Frances.  Here are a few options, all calculated at that same pace:

These routes are great for travelers less interested in doing the entire
route and more interested in the short-term experience of the destination.

As you travel the road, on any part of it, you will find pilgrims with backpacks and walking sticks who stop each night to stay in hostels or dormitories, which are available every few miles on the 500-mile stretch.  Some shared housing is available for free, but there are less communal options available in the $10-50/night range.

In Spain as you near Santiago de Compostela there are government-owned hotels known as Paradors.  Prices at paradors range from $75 for a single room to up to $200 for doubles and that comes with breakfast.

Finally.  You reach the end of the road and stand in the middle of old town.  In front of  the cathedral  are offices where the pilgrims who have walked the Road to Santiago get stamps showing where they have stopped along the way.   Go to the office and get your final stamp, commemorating the finish of your journey.

Did I find the pre-Christian roots

Although I couldn’t get too many folks to talk about the pagan angle, it was interesting to find shop after shop selling flying witches or Mejas, for good luck.  Meja, in Spanish, means good witch.

In addition to the witches you can also buy brooms and amulets and charms just about everywhere.  These items are actually sold right next to the saints, but getting a local to talk about it proved difficult.

A manager at the hostel where most pilgrims stop before or after the big day and the final walk knew about the witches.  He got downright passionate about it, more passionate than talking about St. James’ bones.  But his Spanish and my English meant slow going as he explained his grandmother’s legends and stories, including one about a young couple’s son who died and was brought back to life by the local Meja.

There are these types of faint legends that exist right alongside the Catholic lore.  And I bought a good luck witch – just in case.

Also interesting is that this area of Spain has a heavy Celtic influence.  Listen for bagpipes that create a remarkable blend of Spanish and Celtic.  It’s another pagan angle, those Celts, and I found it again and again as I searched throughout the area.  Their legends, too, have been forgotten in history.

The winds have changed in Galicia over the centuries.  What is buried beneath the cathedral, be it the bones of Saint James or someone else, along with the stories of the Meja, have all become part of the legends pilgrims tell while walking the road.

This trip was partially taken with the Spain Tourist Office, but the experiences and opinions are the author’s own.

2 thoughts on “Legends and Myths on the Road to Santiago”