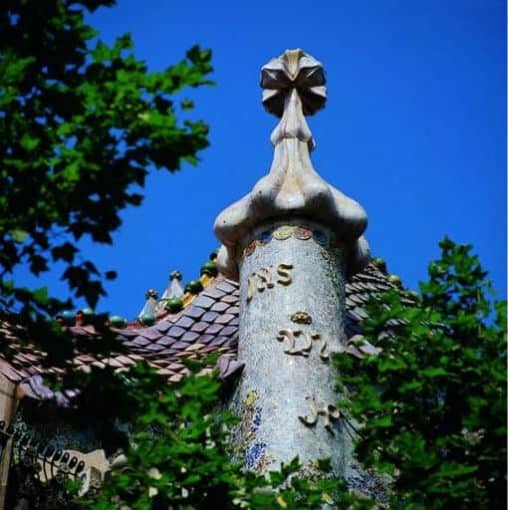 When I think of Barcelona, Spain, the thought of Antoni Gaudi, the Catalonian architect born in 1852, always comes to mind. After all, the city is covered in the man’s work.  In fact, Gaudi’s work over the years has irrevocably influenced the face of Barcelona architecture like none other before or after.

Influenced primarily by nature, Gaudi played with a bevy of curved construction stones and twisted iron sculptures that are today one-of-a-kind in Barcelona and you’re not likely to see it anywhere else in the world either.  He used colored-tiles, often red, arranged in mosaic forms to add splashes of color and dimension to his work and you will find these whimsical touches on buildings and homes all around his beloved city.

Because Barcelona is all about boasting Gaudi’s prowess too, a tour of at least a few of his most famous buildings is a must when visiting the city.

Indeed, Gaudi’s work during his lifetime, and certainly now, is admired around the world and if you have never seen one of his works of art you will know it by sight the second time.

Want to learn about the master architect on your own Gaudi tour? Here’s where I started my visit learning about the intricate designs and colors that this artist embraced. Don’t worry if you’re traveling alone – Spain is an easy place for solo travelers.

If you’re not sure where to start, for first-time Gaudi newbies or even Gaudi-ophiles who haven’t been, the place to begin your exploration is Gaudi’s church (or the one he started designing) called La Sagrada Familia Basilica.  Even though the man has been dead for many years, the cathedral of La Sagrada is still unfinished and folks are still arguing about the final stages of this great work of art.  What would Gaudi want the finished product to look like they wonder?

La Sagrada Familia Basilica is by far the most visited tourist attraction in Barcelona.  While it is a Gothic cathedral, it is also much more – inside the cathedral there is also a museum, a number of exhibitions, and children’s workshops are even held from time to time on various subjects.

The Museum began in 1961 in the half-basement on the Passion façade and in both the museum and lining the church walls are drawings, photographs, liturgical furniture, and models either restored originals, replicas of originals and new ones that are on display.  You can also see the model-makers’ workshop where Gaudí’s original models have been restored so that current architects are held accountable for getting the Gaudi project just right even year’s later.

When visiting La Sagrada Familia Basilica notice the difference between the front and the back of the building as both the color of the stone and the construction of the old versus the new sections are noticeably different.  When Gaudi died in 1926 he was still chipping away and working on the construction of the still unfinished cathedral. However, during the last 15 years of his life, he planned much of the future architecture of the church so that it could continue to be built after he was gone.  He did this by combining geometrical forms of various shapes and sizes thereby developing a system of proportions applied to all the dimensions and elements of the church.

With the unusual shaped stones however, it seems that many believe this was merely an interpretation of what the architect “might” have intended to create.  Not surprising, there is a lot of controversy in the ongoing construction as new creators try to interpret his work.

Folks line up every day of the year from around the world to visit the Basilica today, after all how often do you get to enter a building that has been under construction since 1882.  Even more puzzling is that it is not expected to be finished for at least another 30 years.

Admission: $20 (based on current exchange rates.

Other Gaudi must-sees in Barcelona:

If you’ve fallen in love with Gaudi, as happens to so many visitors to Barcelona, or are a bit curious, here are some other Gaudi locations worth a visit:

Park Guell – This is as Gaudiesque as it gets in Barcelona and you could spend the day.  It’s a park with buildings, sculptures and tile work designed by Gaudi. Gaudi’s old home is located in Park Guell and is open to the public.  Inside the park, a number of artists have set up booths and stands to sell artwork and jewelry that in some cases depicts Gaudi’s flamboyant style. Also notice the serpentine ceramic bench, water fountains and the Hansel-and-Gretel-style houses that Gaudi also designed inside the park.

Entry to the park is free and to get there take the metro from La Sagrada Familia up to Lesseps – Parc Guell and you will see signposts from there.

Casa Batllo – Casa Batllo is one of the most interesting and unusual houses in Barcelona and is hard to describe.  The site was renovated by Gaudi in the early 1900s, and despite his penchant for not finishing work, this was a project he did complete – both the exterior and interior. All stone and glass on the facade and colorful like a fun house the exterior walls are designed in such a way as to look wavy topped with lime mortar and mosaics in a variety of bright colors.  For me, just exploring Gaudi for the first time. I wanted to open yet another piece of the puzzle of his mind.  His work is a cacophony of shapes, colors and light constantly playing on one another in what has been called a pre-empt to the theory of rationalism.

To get inside Casa Batllo you will have to pay $25, but this includes an audio tour.  Getting there take the Metro to Passeig de Gràcia L2, L3 or L4. L2, L3.

La Pedrera – On the street called Passeig de Gracia,  La Pedrera, also called Casa Milo, is less opulent than Casa Batllo, but it’s all Gaudi.  There are concrete and twisted iron balconies that were meant to grace the likes of a residential building when built.  Now the building is owned by a local bank hosting art exhibitions and concerts.

The fee is $12 to visit the interior.  It’s worth the price of admission to get a little insight into Gaudi’s interior world.

NOTE:  The author took a trip to Spain with the Spain Tourist Office where she gleaned most of her knowledge about Gaudi, these impressions are her own.

1 thought on “Barcelona Art: The World of Gaudi”