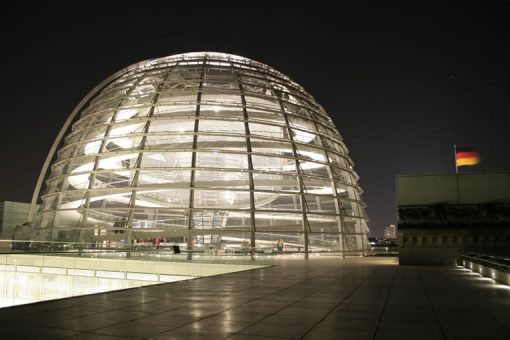 Berlin is a modern city that embraces it’s tumultuous history while forging toward a hopeful future. There are many reminders of history around the beautiful capital. From Brandenburg Gate to the remnants of the Berlin Wall, most Berlin tours will take you to these sites, but equally famous is the Reichstag or Parliament building which remains one of the most popular tourist sites for visitors of the city.

The building was completed in 1894 when Germany was still under the rule of Kaiser Wilhelm.  At that time legislation was shared between the Reichstag and the Imperial Council (Bundesrat) of the reigning princes of the German States. Architect Paul Wallot constructed the edifice in a Neo-Baroque style with a cupola of steel and glass that was considered an engineering feat at the time. Construction began on the site of a former palace of a Polish-Prussian aristocrat and was chosen to sit at the end of the Eberstrasse and near the south bank of the Spree River. The building housed the imperial assembly or Reichstag which was succeeded by the Reichstag of the Weimer Republic.

Right after Hitler seized power in 1933, a fire destroyed a part of the building. Marius van der Lubbe, a Dutch Communist, was accused and executed for the crime. Hitler blamed communists and communism for the fire and demanded emergency powers which led to the rise of his regime. The parliament building was abandoned, and the meetings of the Nazi Party were held across the street in an opera house. It was bombed by the allies during WWII and stormed by Russian troops In 1945. The soldiers scribbled on the walls inside and the graffiti is still visible.

The Reichstag was renovated in the 1960s to shore up the structure as a national landmark. Once Germany was reunified, a new architect was hired. Sir Norman Foster was tapped to completely renovate the historic building. 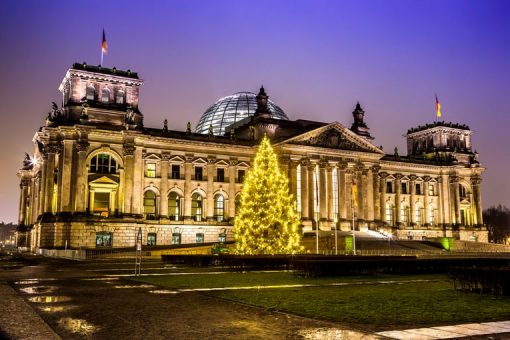 The renovations spanned from 1992 – 1999, and the improvements included a new steel and glass dome that surrounds a spiral observational platform. The platform rises 755 feet to the top of the dome. The unified government voted to bring the parliament back from Bonn to Berlin and the Bundestag (Federal Assembly of the lower house of Germany’s legislature) began its sessions on April 19, 1999, in the building. The glass dome is symbolic for the ideal of transparency that guides the new Germany.

The term Bundestag stands for the current national parliament of Germany. Reichstag only refers to the building itself. The panoramic view from the dome on top of the Reichstag is not to be missed. The glass enclosure allows sunlight to stream down to the floor of the Parliamentary Chambers. There are electric sunshades that help regulate the amount of the sun that filters into space. Plans are currently underway to convert the historic building to run on 100 percent renewable energy.

Citizens can observe parliament live in the visitors’ area, but tourists can see the operations of parliament from the glass floor of the dome. Hence the transparency of the government. Adjacent to the dome is a rooftop terrace where you can look out over Berlin and see 45 essential landmarks around the city.

The rooftop terrace and the dome is open daily from 8 am-midnight, with the last entry at 10:00 pm. Admission is free, but you have to register in advance either online, via fax, or by mail. You need to apply at least two days before visiting. Guided tours of the building are given daily ( English language tours by appointment only). A limited number of two-hour advance tickets (if places are available) can be requested at the service center on the south side of Scheidemannstrasse next to the Berlin Pavilion.

A free audio guide is available for your tour of the dome. The guide provides 20 minutes of information about the Reichstag, the work of the Bundestag and the sights you can see from the dome. It can be picked up at the roof terrace and is available in ten languages. There are versions for children and for persons with disabilities.

The German Bundestag is the only parliament in the world to house a public restaurant within its working space – the Reichstag.

The roof garden restaurant, Kaefer, is situated east of the dome and also offers breathtaking panoramic views over the city, especially at night. The modern German cuisine is prepared with the freshest regional produce and accompanied by German wines.

Kaefer offers diners a unique Berlin experience even without visiting the dome, but you are permitted to arrive earlier than your reservation to tour the enclosure and the rooftop terrace. If you prefer a reservation without a tour you can reach the restaurant from the entrance below, and to the right of the West Portal (West C) Kaefer is open daily for lunch from 9-4:30 pm and for dinner 6:30 – midnight.

Author Bio: Jeanine Consoli is a freelance travel writer, photographer, and foodie based in Washington Crossing, PA. A retired elementary school teacher, she used her summers to feed her passion for travel and kept journals of all the destinations she explored. Today, Jeanine is working as a writer full-time. She loves uncovering the history and understanding the culture of each location, including the local flavors of each unique place. She has traveled extensively in the United States and Europe and is excited to keep adding to the list, finding special places that are off the beaten path both at home and abroad.