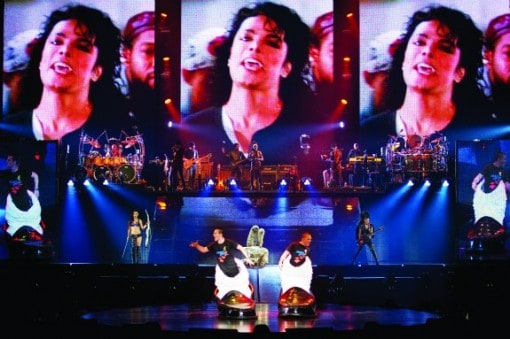 Picture a quick-hit combination of elaborate costumes, stunning visual effects, impressive acrobatics, 1980s style dancing and music made popular by the late Michael Jackson and you’ll have a pretty good idea of what to expect in Cirque du Soleil’s traveling tribute to the King of Pop – Michael Jackson: The Immortal World Tour.

I saw the two-hour show when it passed through Indianapolis and came away with mixed emotions; not because of anything I saw or experienced but rather, because of what I didn’t.

The quality of the production was very good and the combination of recorded Michael Jackson music tracks and utilization of a live band led by longtime Jackson collaborator Greg Phillinganes was absolutely outstanding, but the show’s lack of a lead character – I was expecting to see at least one Jackson impersonator – left me somewhat disappointed.

Rather than focussing on a specific story line, the creators of Michael Jackson: The Immortal World Tour structured the performance as a series of vignettes that feature a mime, a five-man dancing group of clowns and a costumed Bubbles the chimp.  Here’s a teaser of what to expect:

For the focus on Jackson’s childhood, part of the show’s large, multifunctional stage transitions from a flat performance area to a standing projection surface, and then ultimately to a ramp. In the middle of the stage, there are also large drawers that serve as steps for artists to perform on.

During the show, after a brief look inside the Neverland Ranch where bronze statues come to life, the audience is transitioned into a heart-pumping, dance heavy rendition of “Wanna Be Startin’ Somethin’.”

I enjoyed the performance medley of “Heartbreak Hotel,” “Smooth Criminal,” “In the Closet” and “Dangerous.”  And though I appreciated the flexibility and artistry of an accompanying pole dancer as music and video footage flooded the arena, I found her pole dance antics to be somewhat distracting and borderline inappropriate for many of the younger audience members.  Nevertheless, the show’s emotional flow is subtle and genuine. It’s difficult not to feel the groove as acrobats are sent spiraling into the air during “Dancing Machine” or while an afro-heavy celebration of the Jackson 5 is taking place. 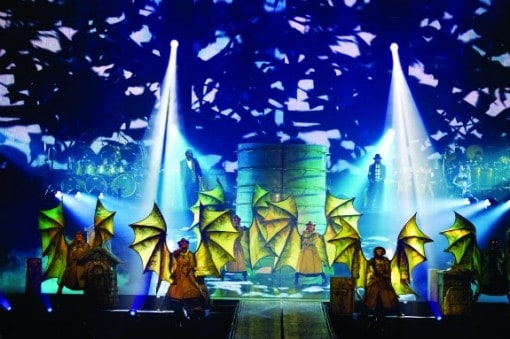 The sequence composed of “Ghosts,” “Is It Scary,” “Threatened” and “Thriller,” which begins with a costumed creature crawling out of a large storybook,  is enjoyable but too short.  It’s the prelude to a 20-minute intermission.

At times the performances takes audience members on a bit of an emotional roller coaster ride.  For example, an army of robots march in unison as a video montage plays footage that depicts violence, destruction and despair during the playing of “They Don’t Care About Us.”  It’s a stark contrast to the lighter and happier moments.

As the show draws to a close, fireworks and flash pots are part of a vignette that includes a global flag display, intended to reflect Jackson’s emphasis on hope, unity and change during the playing of “Black or White” and “Man in the Mirror.” 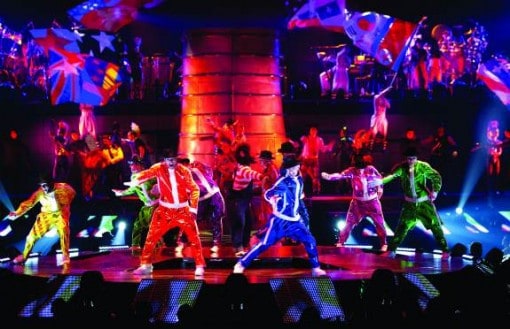 The Immortal World Tour is a colorful performance by extremely talented musicians, gymnasts, dancers and acrobats, who attempt to pay tribute to one of the greatest entertainers of our time.  They combine signature Jackson moves and musical talents with modern-day variations, interpretations and technology.  Over 30 songs are performed, most folded into medleys rather than being played in their entirety.  (To my surprise, popular Jackson hit tune “The Way You Make Me Feel” is strangely left out of the show.)

This production is not a musical concert, a clinic in popular Jackson dance moves, or a typical Cirque du Soleil stunt-heavy show.  What it does well is feature outstanding musicianship with an appropriate combination of physical feats, entertaining dances and visual effects.

Tour Dates
After an extensive North America tour that runs through late summer 2012, the Cirque du Soleil production of Michael Jackson: The Immortal World Tour will take a brief hiatus before embarking on a European tour in October.

Ticket Prices
Generally between $50 and $175 per ticket