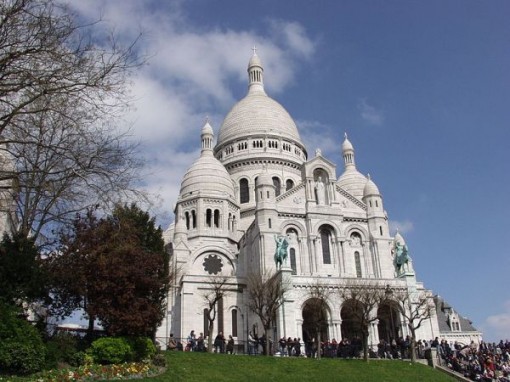 One of the most dramatic views of Paris is that from butte Montmartre at the Basilica of the Sacred Heart, better known as Sacre Coeur. Montmartre is a bit quieter and less crowded than other areas of the city, particularly on a weekday. Don’t mistake the more relaxed atmosphere with a lack of energy—Montmartre has its own energy, more focused on the business of everyday living than catering to tourists. As you walk the streets you will pass card and dice games being played on stacks of empty crates in the middle of the street; when the occasional car or truck turns down the street, crates are quickly swept up and moved to the sidewalk. Neighbors visit with one another as tourists wander the streets, browsing an eclectic assortment of shops that line the streets – a mix of textile shops, stores full of trinkets and souvenirs, fabric shops, and cafes.

423 feet above sea level, Sacre Coeur sits atop the hill (or butte) known as Montmartre, from which the surrounding 18th arrondissement takes its name. Montemarte means “mount of martyrs,” called such because it is where Saint Denis, the first Bishop of Paris, was martyred. It was in this same location in 1534 that Saint Ignatius of Loyola and Saint François-Xavier founded the Society of Jesuits. Sacre Coeur is a significant location for many of the most famous names in historical Catholicism: Saint Germain, Saint Bernard, Saint Clotilde, Saint Jean d’Arc (Joan of Arc) and Saint Vincent de Paul. In 1871 building the basilica was proposed as an offering of penitence and reparation from France to the Prussians, after their 1870 defeat in the Franco-Prussian War. In 1875 the basilica’s foundation was laid and construction continued on for 39 years, but before the building could be consecrated World War I broke out and lasted until 1918; Sacre Coeur was finally consecrated on October 16, 1919.

Sacre Coeur is significant in any number of ways: historical, religious, artistic, architectural and musical.

Visitors may also celebrate Daily Mass with the Sacrament of the Eucharist. Monday through Thursday masses are held 11:15 a.m., 6:30 p.m. and 10 p.m.; Vespers (spiritual singing) are at 6 p.m. On Fridays mass is at 3 p.m. and includes Adoration and Eucharistic procession. On Saturday Vespers are at 6 p.m. followed by Vigils, and a Sunday evening mass is celebrated at 10 p.m. On Sunday there is a full day of worship starting with Lauds at 8 a.m., Mass at 11 a.m., Vespers and Benediction at 4 p.m., another Mass at 6 p.m., Complines (peaceful meditation and contemplation) at 9:30 p.m. and a final Mass at 10 p.m.

Christina loves travel writing, and she has a particular interest in writing about adventure travel, food and drink. In addition to writing Christina works as a social media manager and consultant, helping people tell their stories online. In her spare time Christina enjoys reading, yoga, and spending time outdoors. Christina lives in Houston with her husband Josh and their dog, Sandy. You can follow her on Twitter @snowcones. Her top three travel spots are Alaska, Paris, and Western Canada.