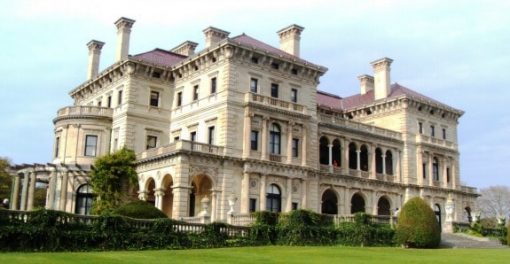 Newport, Rhode Island was established in 1639 as a haven for those seeking religious freedom. By the mid-19th century Newport became a haven of a very different kind. The City-by-the-Sea became a summer playground for the very wealthy who built enormous mansions and claimed them as “summer cottages”.  Anything but cottages, these homes were built by families like the Vanderbilts, Astors, Belmonts and Berwinds. Designed by the best architects of the day with no expense spared in an elaborate game of one-up-manship, these mansions border the obscene for their grandness and ornate style.

Perhaps the grandest of all the cottages is The Breakers built by Cornelius Vanderbilt II. The 70-room villa is actually the second home to be built on the site as the first family residence was destroyed by fire. Built on a 13 acre estate that overlooks the Atlantic Ocean, the home received its name from the sound of the waves breaking on the rocks below. The two and a half story Great Hall adorned with marble and platinum leaf walls is stunning by today’s standards let alone when it was completed in 1895.

Another Vanderbilt cottage, Marble House, was completed in 1892, a gift from William K. to his wife. Built with 500,000 cubic feet of marble the home was to be the ultimate statement of unlimited wealth. The imposing front doors are so ornate that they were on display in New York before being delivered to the home. Alva Vanderbilt admitted that she thought of this home as her fourth child and happily entertained here, including several “Votes for Women” rallies held on the lawn. 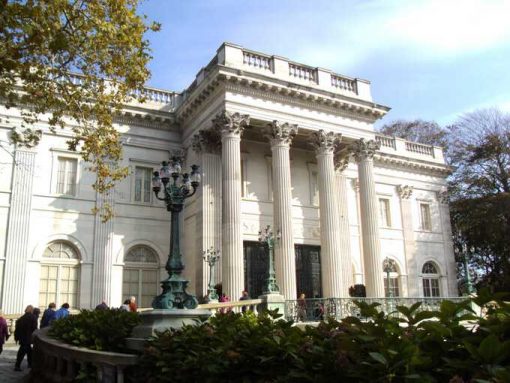 Coal magnate, Edward Berwind completed his summer house, The Elms in 1901. The home was built with all the modern conveniences including one of the first homes to use electricity. The Elms offers an additional tour, The Servant Life showcasing the kitchens, boiler room, coal cellar, laundry room and their third-floor living quarters.

Nevada silver heiress, Theresa Fair Oelrichs, built Rosecliff as a party pavilion complete with the largest private ballroom in Newport.  One party held here featured the magician Harry Houdini. The mansion has been used as a set for the movies The Great Gatsby, True Lies, Amistad and 27 Dresses. Today, Rosecliff is not only available to tour, but is the site of the annual Newport Flower Show and hosts rotating exhibits presented by the Preservation Society.

There were a few things that stood out to me while touring the mansions, one being the small number of bedrooms for this large of a home. I was reminded that these were show homes for entertaining, not housing guests. Additionally, I was stunned by the massive wealth of these people affording them the luxuries of a mansion that was only used for a few weeks during the year. And lastly, luxury doesn’t necessarily equal practicality or comfort evidenced by the massive marble bathtub installed in The Breakers which needed to be filled and emptied four times before the tub itself would be the appropriate temperature to sit upon.

I am generally not one to use listening devices or download tour apps to my phone, however, I highly recommend visitors take advantage of these to enhance your mansion tour. With so many features for your eyes to focus upon, it is nearly impossible to see it all and I found the audio tours to be informative as well as entertaining.  A special audio “family tour” is available within The Breakers. Based on personal diaries, letters and oral histories the tour tells tales of the Vanderbilt family, the servants, and their children all from the perspective of the house itself. I found the family tour to be quite fascinating and often switched back and forth between the two versions.

Another sign of our advanced times is that visitors to The Breakers, The Elms, and Marble House are allowed to use smart phones to take interior photos for personal use only. Selfie sticks, flash and/or the use of tripods are still prohibited. 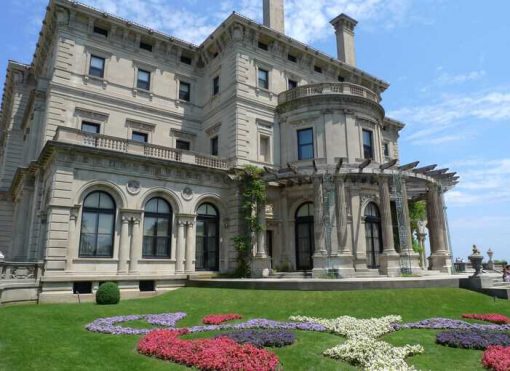 Following WWII there was a push to demolish and redevelop many of the Colonial and Gilded Age buildings of Newport. Fortunately, The Preservation Society of Newport County, Rhode Island stepped up to preserve not only the historic architecture but also landscapes, decorative arts and the social history of these bygone times. In all, seven of the 11 historic properties under the care of the Society are listed as National Historic Landmarks and span over 250 years of American architecture. Thankfully so, as the image of the Mansion lined Bellevue Avenue is what many associate with the town of Newport.

While the mansions were visited by their original families only six-eight weeks in summer,  The Preservation Society opens the mansions for tours and events throughout the year. Special events include The Newport Flower Show, The Newport Mansions Wine & Food Festival, and Christmas at the Newport Mansions. There is a true “Mansion Season” that runs from Memorial Day weekend through Columbus Day in October when all ten of the historic house museums are open.  Only The Breakers, The Elms, Marble House, and Rosecliff are available for tours the remainder of the year.

Disclaimer: The author received a complimentary admission for the purpose of a review. 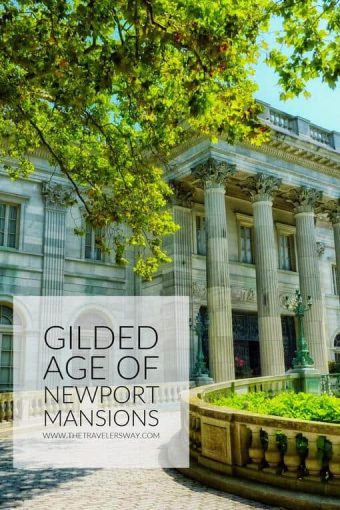