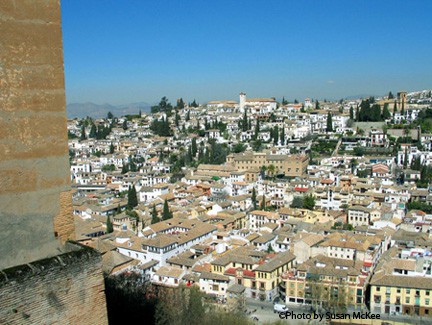 Like countless visitors to southern Spain before me, I stood next to the Alhambra, spread out on the plateau rising above the modern city of Granada, listening for whispers from the ghosts of centuries past.  Looking out over the rooftops of the town, I could see the Sierra Nevada mountains in the distance, still snowcapped on this March day. Put visit Granada on your bucket list.

Granada is a city with many layers of history. This town, center of the last of the great Moorish kingdoms to fall to the Christian Reconquista of the Iberian peninsula, has the best-preserved ruins from the time when Islam was the dominant religion of Spain. But, even though Muslims ruled the region for more than 800 years, I could discern no traces of Islam.

The last Muslim ruler, Boabdil, surrendered his domain to King Ferdinand II of Aragon and Queen Isabella I of Castile on January 2, 1492.  Later that same year, a most auspicious year for Spain, it was in the halls of the Alhambra that Christopher Columbus outlined his vision for sailing west to reach the Spice Islands. With his expected success, he said, Spain would gain untold riches, imperial power, and countless souls to Christianize.  It was also here in Granada, in the same year, that the Alhambra Decree was issued, expelling Jews and Muslims from Spain.

The echoes of the Moors are almost impossible to hear in the Alhambra today. Even in the early weeks of spring, polyglot tourists from around the world filled the town. While admission to the palace complex is by timed ticket (to control the crowds), the surrounding gardens and walkways of the historic redoubt are bustling with activity at all hours of the day. Bus tours of school children and senior citizens vie with groups of backpackers and solitary strollers to check out the sights, jostling for photogenic vistas.

The now-familiar Alhambra complex of palaces and gardens was designated a UNESCO World Heritage site back in the 1980s. Its walls, made of bricks fired from the red earth of the region, gave the outpost its name – “al hambra” means “the red”. 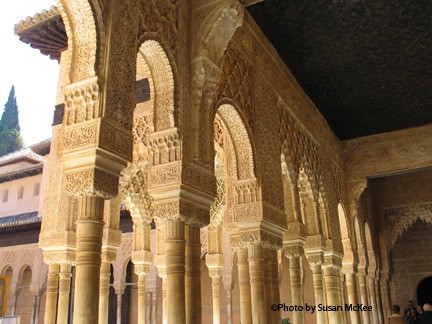 Centuries of history intrude when contemplating the past, however. The Alhambra with its high walls and thirteen gates has been altered, renovated, remodeled, and changed over the centuries.  The palace, allowed to decay through neglect over the centuries, gradually became a warren of private dwellings before being haphazardly reconstructed and partially restored in modern times. New York author Washington Irving spent time here, penning Tales of the Alhambra in 1832.  And Alcazaba, the garrison area, is mostly empty now with only the ramparts remaining to remind visitors of its defensive purpose.

Yet, as I stood in the pale off-white Hall of the Ambassadors – where Columbus is said to have met Ferdinand and Isabella in the spring of 1492 – there remained a hint of the grandeur of the Islamic era. All around me were the ruffles and flourishes of Moorish decoration – the graceful Arabesques, colorful tiles, and stucco calligraphy.

In all this magnificence, Columbus met with his potential royal backers who were still flush with their final victory over the infidels. Here, in the former sultan’s Hall of the Ambassadors, the Genoan pleaded his case for sailing west to find the spices of the east. Here, the emphatically Roman Catholic Monarchs – minds focused on expanding Christianity – promised to underwrite his great adventure.

From the royal precincts of the last Moorish kingdom acquired in the Reconquista, King Ferdinand II of Aragon and his wife, Queen Isabella of Castile, laid the foundations for Spain’s golden era and far-flung empire. 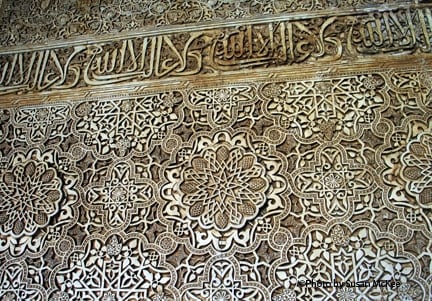 Even without the original stained glass and gilt trimmings, the room is impressive, with bright sunlight filtered by the myriad openings in the walls. Far above me were the 8,017 separate pieces of wood forming a most astonishingly intricate mosaic ceiling representing the seven heavens. 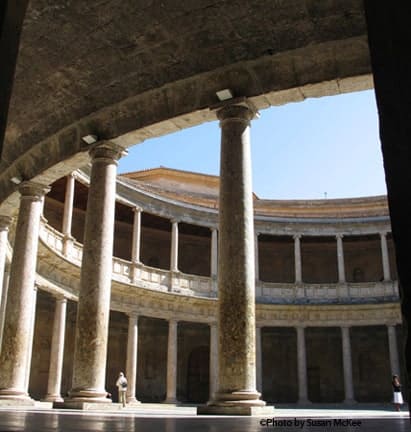 After I left the Moors’ palace, embellished with all the tightly controlled flourishes of Nasrid architectural detail, I turned toward the neighboring Renaissance palace of Charles V. The official story is that this immensely powerful European emperor saved the Moorish structures from certain destruction by choosing the precincts of the Alhambra for his palace – but, truth be told, he demolished some structures even as he preserved others. The unusual rectangular building encloses a circular opening with two stories of colonnaded open hallways. Inside are two unremarkable museums.

Adjacent to the Alhambra is another, smaller plateau holding the Palacio de Generalife (a corruption of the Arabic name of Jennat al Arif, “Garden of the Architect”). This was the “country estate” of the Nasrid rulers of Granada. Its location on the Hill of the Sun was just high enough to benefit from cooling breezes in the hot summers. Stretched out below is the residential district of the Albaycín district, a rich repository even now of Moorish vernacular architecture.

In later centuries, Granada retreated to the background of Spanish history. What’s left of earlier eras seems to owe as much to neglect as preservation efforts. Most of the Roman Catholic history is found at the foot of the Alhambra, where this bustling modern city is rapidly expanding into the countryside.

Ferdinand and Isabella commissioned a royal chapel down here for their final resting place, and what an extravagant setting it is. The altarpiece is an enormous wall-sized tableau combining piety with politics – figures portray scenes from the Bible and from the Reconquista all framed in gilt and embellished with jewels. In front of the altar are two enormous white Carrara marble cenotaphs: one for los reyes católicos and the other for their second daughter, Juana and her husband, Phillip the Fair (who succeeded them on the throne). Juana and Phillip are the parents of Charles V. (The actual burial caskets rest in an open vault beneath the floor.)

Ferdinand and Isabella’s fifth surviving child is perhaps more familiar to English-speakers. She was Catherine of Aragon, first wife to Henry VIII of England. 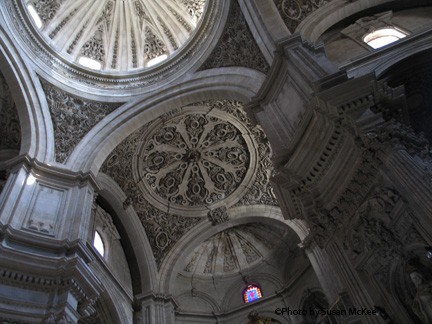 The royal chapel is next to the Cathedral of the Annunciation. Designed in 1529 at the peak of the Spanish Renaissance by Diego de Siloé, the complex structure took 181 years to complete. The main façade was redesigned with Baroque elements by Alonso Cano in 1667, but the two large towers he planned were never built.

In Granada, I stayed just a few blocks from the cathedral at the lovely AC Palacio de Santa Paula. A renovated convent, the oldest parts of the building date to its 14th-century origins as a Moorish house. Although the four-star hotel is located right on Gran Vía de Colón, one of the busiest streets in town, my room overlooked an enclosed courtyard and I heard none of the traffic.

Pomegranates, a royal favorite, are used as a decorative motif everywhere in Granada – not surprising since the name of the town means “pomegranate” in Spanish. Even the traffic barriers are topped with the fruit. (It’s said that the vegetal flourish capping the dark red fruit reminded rulers of a crown.)

The Alhambra is a busy place. Buy your tickets in advance to be certain of a slot on the day you wish to visit. Information is online.  The Granada tourist office also is a good source for the entire province of Granada.

Photo credit:  From the author’s personal collection; used with permission.

NOTE: The author’s travel was hosted by Turespaña and Turismo de Granada; the opinions expressed here are her own.