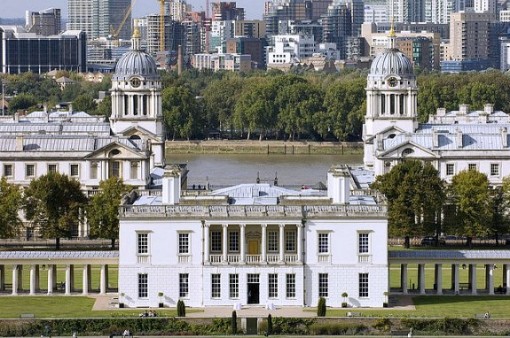 A district of south London known as Greenwich holds a place of universal importance.  Not because The Queen’s House, located here, served as the residence for several generations of British royals including Henry VIII.  Nor for the fact that it is the site of  the world’s largest maritime museum, the National Maritime Museum or that it holds London’s only observatory, the Royal Observatory.  The reason this district is so important is because Greenwich loaned its name to the standard once used to regulate time and set clocks around the world, Greenwich Mean Time.

As part of the Royal Observatory, Flamsteed House is the original observatory that was built in 1675.  Guests can explore two galleries which feature exhibits tackling the questions of how to map locations and measure time accurately.  My favorite room within the House is the Octagon Room, constructed, but not scientifically designed, for the observance of celestial events. 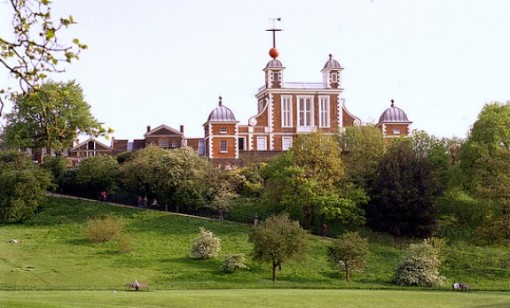 This is not an area I know much about, so I was very interested to learn about the various systems and inventions used for navigation by the ancient mariners.  As Britain grew into a leading maritime nation it became urgent for navigators to have a standard to calculate locations.   In 1884 an international conference established a system of marking distances using longitude and latitude. Using the Prime Meridian and Equator as original reference points, the Prime Meridian of the world proudly sits at Greenwich. 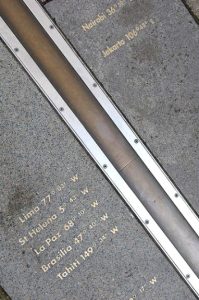 Outside the Flamsteed House, is Meridian Courtyard where marked by a line and signage declares the exact spot of  0° Longitude or the Prime Meridian.  For a fabulous photo opportunity stand straddling the line having one foot in the Eastern Hemisphere and one foot in the Western.  Establishing these lines also created standardized time zones based on Greenwich Mean Time.  Another item that caught my eye was the 24-hour clock, hanging on an outside wall.  NOTE: Admission is charged to enter the Flamsteed House and Meridian Courtyard.

Borrowing from the phrase it is good to be queen, the National Maritime Museum is housed in two separate buildings once used as a school for seaman’s children, with the royal residence in the middle allowing for her highness to keep a fabulous view of the River Thames.  Covering 500 years of maritime history displayed in numerous galleries, I particularly enjoyed the models used in shipbuilding.  It was interesting to observe the improvements to the ships as time progressed. 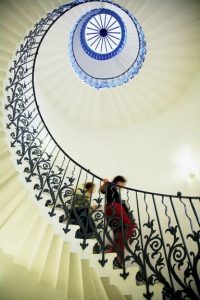 The Queen’s House is also open for tours, including the original Great Hall with geometric black and white marble inlaid floor.  Another elegant feature of the House is the “tulip staircase”, thought to be the first self-supporting staircase built in Britain.  The wrought-iron railing features tulips, thus giving the staircase its name.  Thought to be the turning point for English architecture, the Queen’s House is now home to a vast art collection.

The former hunting grounds of the palace is now a 183 acre park.  Situated at the top of a hill, Greenwich Park offers stunning views across the River Thames. Work up an appetite by renting a rowing or pedal boat at the Boating lake or pay and play a round of tennis at one of the six available courts.  Or perhaps you would like to view nature at the Wilderness Deer Park for a look at the Red and Fallow deer among other wildlife that make their home here.   Stop at one of the surrounding refreshment points for a quick bite to eat or visit one of the cafes located at the museums.

For additional exploring, take the Greenwich foot tunnel to the Isle of Dogs.  Though called an island it is actually a peninsula cut on three sides by the River Thames and as legend has it, it was the home to Henry VIII’s hunting dogs.  Island Gardens, a public park, officially opened in 1895 and it offers fabulous views of Greenwich from the other side. Thought to hold one of London’s finest markets, Greenwich Market is a unique, covered market featuring original artwork, handcrafted toys, fashion and jewelry as well as produce and take-away foods.  It’s a perfect spot for buying one-of-a-kind souvenirs.

Greenwich is accessible by two light rail lines or guests may also arrive via the Tube.  Though not a direct route, using this means of transportation allowed us a view of the tea clipper Cutty Sark and to stop off at one of the many pubs in the area including our favorite, Shepherd Neame.  Note: Nearly destroyed by fire the Cutty Sark is currently under renovation, but will once again be accessible, Spring 2012. 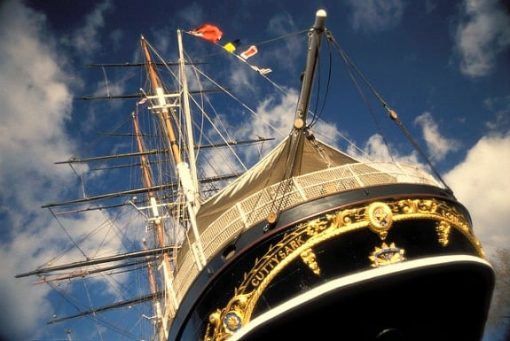 The next time you glance at your watch, arrive at your correct destination, or conduct business with someone on the other side of the globe, give pause to consider Greenwich.  Offering historical sites, shopping and dining spots and a park for relaxing, the area of Greenwich will provide a fabulous day trip outside of London.