Siracusa, on the island of Sicily, is well known for its rich Greek history, which includes ancient amphitheaters, architecture, and culture.

The entire city of Siracusa is a UNESCO World Heritage site, citing  the numerous “monuments and archaeological sites situated in Syracuse are the finest example of outstanding architectural creation spanning several cultural aspects; Greek, Roman and Baroque.” Additionally, it was found that Ancient Siracusa was “directly linked to events, ideas and literary works of outstanding universal significance.” 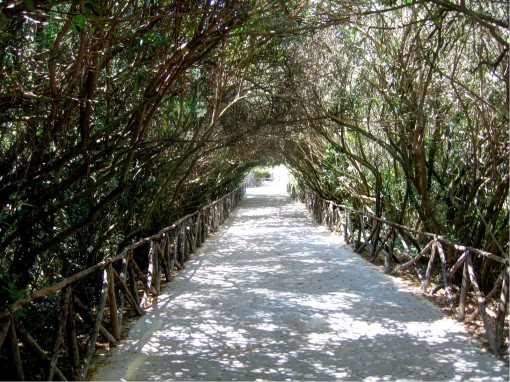 This covered walkway is near the Teatro Greco and leads to a nearby stone quarry where you’ll find the Orecchio di Dionisio (Ear of Dionysius). Because of its shape, the “ear” has amazing acoustics, allowing a quiet whisper to be heard through the cave. I’m not sure how it works, but perhaps Archimedes, a mathematician and engineer who was born in Siracusa, would have been able to explain it to us.

You’ll find covered paths in many spots in Siracusa. When you do, follow the path and see where it leads.