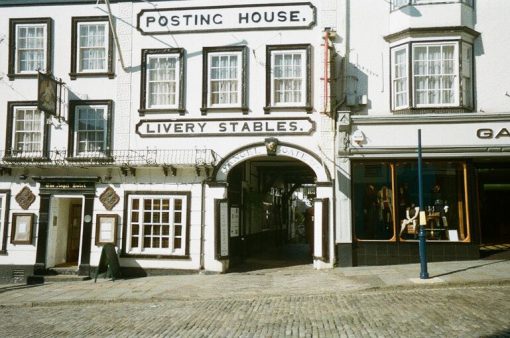 Guildford is a charming market town in Surrey just 30 minutes from central London but it feels a world apart from the UK capital’s hustle and bustle.  It’s famous for being the place that inspired Alice in Wonderland author Lewis Carroll, he’s buried there.  More recently it’s acquired a burgeoning reputation among tourists for its gorgeously quaint High Street as well as for the idyllic countryside of the surrounding Surrey hills.  It’s a secret English gem of a town which most overseas visitors sadly miss.

Take a walk around and you’ll see a thousand years of history in an afternoon. The earliest building you can still see is Saxon, from about 950 AD – the stone tower of St Mary’s church.  There’s also a wonderful mix of medieval houses, Georgian mansions, Tudor brick and classical stucco, all jumbled up along and around the cobbled High Street.

Like many English towns, Guildford got a castle when the Normans invaded – first a wooden fort and then, around 1130, a Great Tower like Rochester Castle or the Tower of London. Unlike the Tower though, the castle soon outlived its usefulness to the royal family; it was used as a jail, then as a cock-pit, and by 1611 it was sold as a ruin. Now the picturesque ruins form part of a Victorian municipal garden – not perhaps the most tasteful planting, but a joyful mass of color in summer.

St Mary’s Church retains its Saxon tower and the rest of the church is also of impressive antiquity.  The Normans built the thick nave walls and the two aisles supported on thick columns were finished in the 12th century. It hasn’t changed much in its essentials since the castle was still a royal lodge. 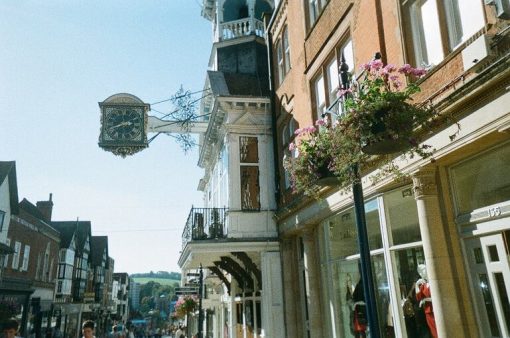 Wander down Quarry Street, the High Street (in photo above) and Chapel Street and you’ll see a large number of timber-framed houses. You might not recognize them though, as often, later owners put a stucco or stone façade on to the timber frontage to update the look of the property. Later on, in Victorian times, half-timber homes became popular again and a number of stone or brick built houses received fake half-timber finishes.  It can be amusing working out which is real and which is fake. Number 90 High Street is my favorite – a lovely 17th century timber façade with huge windows, fine carving and apparently, an even earlier house behind it.

Wander down to the river via Mill Lane for a taste of the old docks and the mills that made the town wealthy. The Mills have now become a theatre studio but they’re easily recognizable – handsome squat buildings in buff brick. There’s a little toll house for the Wey Navigation, a low single-story building, and at Town Wharf there’s a treadmill crane from the eighteenth century, used to unload grain from the barges that came up the Wey. Nearby, St Nicholas church has a mark showing the level of the floodwater – it’s quite frightening.

Where the Town Bridge now stands was once the ford that gave the town its name, originally Gilden-ford. The yellowish sand of the river bed accounts for why it might have been called a “golden” ford – nothing to do with the town’s later wealth.

At the bottom end of the High Street, you’ll be standing where the cattle market used to be held. Just off the High Street on the left, you can find the Shambles, a narrow, steep lane where the butchers had their abbatoirs and shops. The steep slope must have been an advantage when it came time to wash the floor down each evening.

Also on the High Street is the Angel Hotel, with its prominent advertisements of its status as a posting house with livery stables smartly picked out in black and white (in photo at top). It’s the only one of Guildford’s many coaching inns to survive, and its fine Regency façade conceals a secret – there’s a Tudor timber frame building behind and a medieval undercroft – meaning that it’s a good few centuries older than it looks.

The Guildhall dominates the High Street, with its charming polygonal turret and the huge clock of 1683 which hangs out over the street. It was used as a court room, and later as the council chamber for the borough, and again, it’s not quite what it seems; the façade is classical, but the original building behind it is Tudor. 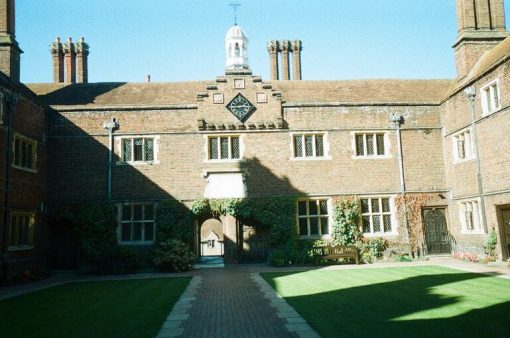 Also on the High Street is the Hospital of the Blessed Trinity, a set of almshouses in red brick, with a magnificent gatehouse and curly Dutch gables, and a set of fine chimneys (in photo above).  It was set up to provide lodgings for old men and women, with a resident Master, and it’s based on the same pattern as an Oxford or Cambridge college – a courtyard with a communal hall and chapel as well as lodgings.  It’s Opposite from the church of St Nicholas, and is a Georgian rebuilding after the original medieval church was destroyed (apparently by bad do-it-yourself improvements) led to the building’s collapse.

Tucked away behind the High Street is the Royal Grammar School, a charitable foundation that predates the Hospital by just over a century. It was founded in 1509 by a wealthy Londoner, Robert Beckingham, though the earliest buildings you see now date from the 1550s.  It also has a chained library left by one of its old boys, who had become bishop of Norwich. Perhaps most importantly though, it claims to be the place where the game of cricket was first recorded – in 1550, when the boys used a three-legged stool as a wicket. No one remembers the score of that first game.

Where should you stay when visiting this lovely English town? When I last visited in January, I stayed at the Radisson Edwardian – one of the newest luxury hotels in Guildford, with its own spa.  It’s conveniently located just off the High Street.

Guest Author Bio:  Andrea Kirkby is a freelance travel writer based in the UK who has travelled extensively in India and counts Bundi, Rajasthan as one of her all-time favorite destinations.

1 thought on “A Guided Walk Around Undiscovered Guildford”