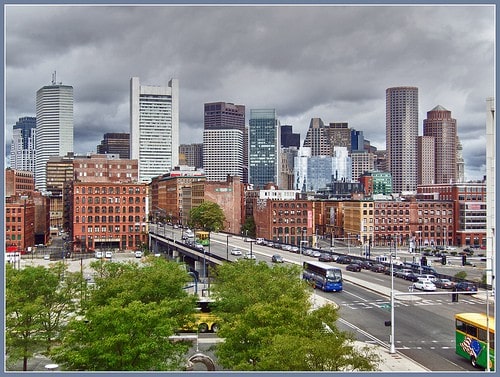 With experiences ranging from history and science to animals and the seafront, Boston has urban experiences to satisfy families with kids of all ages. With things to do that span all areas of interest, Boston is sure to keep every family busy. Say goodbye to a chorus of “I’m bored” in this city; the only hard part will be choosing what you want to do next and figuring out how you can extend your stay.

Here are some popular Boston family activities to keep your family entertained.

Get up close and personal with our friends from the sea!

The New England Aquarium allows visitors to meet marine species from around the world. The aquarium has a large shark and ray touch tank, a popular family choice. Or, try spiraling up the 200,000-gallon Giant Ocean Tank to see tropical fish, sea turtles, and sharks. Watch fur seals and sea lions frolic in their waterfront exhibit and catch a 3D IMAX film. See penguins up close, peek into their burrows and find out what’s behind their underwater super speed. Get your hands wet at the Edge of the Sea Touch Tank and cradle a hermit crab in the palm of your hand. The New England Aquarium is the ideal place to spend the day learning about and experiencing exciting new things.

The New England Aquarium offers the chance to see even bigger animals with the New England Aquarium Whale Watches. The aquarium partnered with Boston Harbor Cruises to take passengers to Stellwagen Bank Marine Sanctuary, a rich feeing ground for whales, dolphins, sea birds and other marine life.  This area is home to several kinds of large whales, including acrobatic humpback whales, finback whales, minke whales, as well as pilot whales and the critically endangered right whales. Learn about all these fascinating marine mammals from onboard naturalists trained by Aquarium experts.

Hands on learning makes scientists of everyone!

The Boston Children’s Museum is another great option for hands-on learning. The museum is the second oldest, and one of the most influential children’s museums in the world. Museum exhibits focus on science, culture, environmental awareness, health and fitness, and the arts. The Museum is also one of the few children’s museums in the world to maintain a collection. The Museum’s collections of Americana, Natural History, Global Culture, Native American, Dolls and Dollhouses, and Japanese artifacts encompass more than 50,000 items.

Across the river in Cambridge is the MIT Museum. Enjoy holograms, new research and inventions, photography, festivals, workshops, as well as permanent and changing exhibitions. The MIT Museum also features the beloved kinetic sculptures of Arthur Ganson, the history of artificial intelligence and Kismet, a robot bear made in the late 1990s as an experiment in affective computing, a machine that can recognize and simulate emotions. With a showcase of the most recent cutting-edge research from labs across MIT, this is an impressive museum for a family visit.

Located on the Congress Street Bridge in Boston, the Boston Tea Party Ship is a floating museum unlike anything you’ve experienced before. Live actors, high-tech, interactive exhibits, authentically restored tea ships and the stirring, multi-sensory documentary “Let it Begin Here,” are just a taste of what you’ll see, hear and feel. Meet the colonists, explore the ships and dump tea overboard just as the Sons of Liberty did on December 16, 1773.

The Freedom Trail is the perfect tour to take around historic Boston. In the 1950s, concerned Bostonians were determined to preserve the story of the American Revolution as it began in Boston through preservation of 16 historically significant sites. These 16 sites are located along a unique 2.5 mile urban walking trail, marked with a bricked or painted red line. You can opt to walk the trail alone or alongside a tour guide dressed in traditional 17th and 18th century clothing.

Located on the Freedom Trail, The Paul Revere House takes the family back in history. Built around 1680, it is downtown Boston’s oldest building and one of the few remaining from an early era in the history of colonial America. Paul Revere purchased the home when he was 35 and lived there with his family when he made his famous messenger ride to Lexington on the night of April 18-19, 1775. The Paul Revere House, restored, owned and operated by the Paul Revere Memorial Association, serves as a museum and historic site where visitors can learn about Paul Revere’s life and times, and experience what home life was like in 17th and 18th century Boston. An array of formal guided tours and special programs are offered for families, schools, and tour groups. 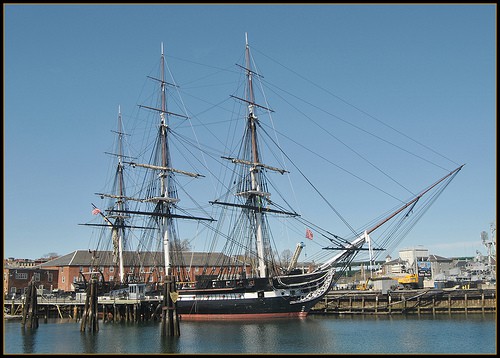 Another interesting stop along the Freedom Trail is the USS Constitution. Launched in Boston in 1797, the USS Constitution is the oldest commissioned warship afloat. The ship is permanently berthed in the Charlestown Navy Yard and ventures out several times a year into the Boston Harbor, most notable on July 4th to celebrate our nation’s Independence Day.  Today, more than 126 years later, she is still a commissioned U.S. Navy warship with a crew of naval officers and enlisted personnel. The ship is currently in dry dock, but you can get afirst hand look at its restoration and learn more about the warship at the USS Constitution Museum, located just yards away from the ship. The museums interactive, hands-on exhibits for all ages bring history alive as one learns what life was like at sea over 200 years ago.

Enjoy a day on the water exploring the Harbor Islands!

The Boston Harbor Islands national recreation area includes 34 islands and peninsulas spread over 50 square miles of bays, harbors, and rivers within the greater Boston Harbor basin. The islands have a great variety of outdoor activities that will keep the whole family entertained. A few examples of things to do on the islands are, walking a Civil War-era fort, visiting historic lighthouses, exploring tide pools, hiking lush trails, camping under the stars, or relaxing while fishing, picnicking, or swimming. You can plan a visit by yourself or take part in the different programs and tours that are offered. Getting to the islands is easy on The Boston Harbor Island Ferry, which leave regularly from several mainland piers.

Boston has great shopping that is sure to keep any teenager happy. Newbury Street, also known as “Boston’s most enchanting street” has eight blocks filled with salons, boutiques, and fabulous dining. This area serves as Boston’s representative of fashion and style, on par with the most exclusive districts on San Francisco, Los Angeles and New York. The street is home to an eclectic mix of independent shops and high-end fashion and dining establishments.