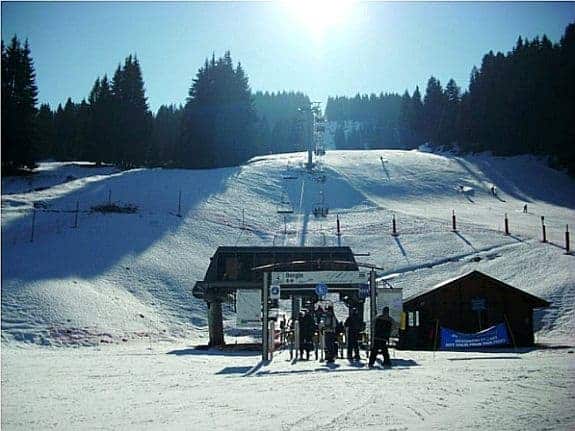 The French Alps are synonymous with great ski breaks. With legendary resorts like Chamonix, home to Mont Blanc, this breathtaking area of Europe lures thousands of winter adrenaline junkies each year.  It is a region famed for extreme ski runs and luxury price tags, so for the novice skier, heading to the Grand-Massif can feel like a daunting prospect. However, it doesn’t have to be about the big names and scary slopes; there are plenty of small Alpine villages in this area which offer a much gentler ski experience; both for the nerves and the wallet.

My friends had tried to persuade me to go skiing for a couple of years,  but when they bought and renovated a ramshackle old chalet just outside the small town of Morillon, 15 miles from Chamonix, I ran out of excuses not to go. They assured me that I wouldn’t even have to ski if I didn’t want to, since there were plenty of woodland walks, spas and speciality shops to explore. So, in late January, some friends and I were on a flight to Geneva, Switzerland, the closest airport to the Grand-Massif region. Soon, we were carefully winding our way up the snowy mountain roads, through Morillon and further up to the chalet’s quiet location. It was quite late by the time we arrived, so we simply settled in and enjoyed a glass of wine by a roaring wood fire.

We were up early and in excitable moods the next day, ready for our first day on the slopes. I had bought some ski wear cheaply in the winter sales before leaving home, but our first stop was the hire shop in town to rent skis, poles and boots. Incredibly, it only cost around $40 each to hire all the equipment for three days. Raring to go, we took the cable car up to the entrance to the resort, where we paid $30 for the day’s skiing and an extra $5 for additional ski insurance. We were issued with a card to swipe against the electronic barriers and we were in.

Just ahead of us was a holiday-style complex of ski chalets, which are generally priced on a weekly basis for four or more people, with individual apartments costing an average of $400 for a 4-person apartment for 1 week in January. However, prices and options vary according to group size and personal preferences  so it’s worth checking the Morillon website if you’re thinking about making a trip here. 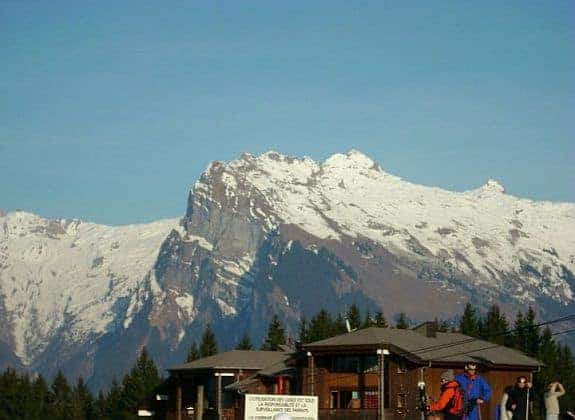 People were emerging from their chalets , slipping on their skis and sliding effortlessly towards the chairlift. My knees began to quake as reality set in. I didn’t have a clue what to do. Still, it was too late to turn back now, and with the encouragement of my kindly host Pete, I made my way towards the baby slope. My friends were just as clueless as I was, so once I was in position, I waited for Pete to help them and give us much-needed instructions. Unfortunately, my skis had other ideas and before I knew what was happening, I began to slide over the snow, gathering speed as I went.

“Stop!” Pete yelled, a pretty useless command when I had no control whatsoever.

“I don’t know how!” I yelled back, and promptly fell over in a very undignified heap. Well, I had stopped at least.

After some patient instruction from Pete and practice runs amongst nursery-aged children, I finally got the hang of it and decided to try a proper run. I reached the chairlift, swiped my card and awaited the chair, which swept me off my feet and into the air. When I arrived at the top of the slope, pointing my skis downwards and sliding onto the snow without incident, I looked down and gulped. To me, the slope looked very scary indeed, but as more advanced skiers flew by me, I realized that it was a very tame one by normal skiers’ standards. I took a deep breath and went for it.

The first time, I fell over a lot. But it wasn’t too busy and there were other beginner skiers about, so I refused to feel daunted and got back on the chairlift. The second time, I found my rhythm and didn’t fall over at all. I did the run three more times, then, feeling a huge sense of achievement, I joined my friends at the cafe for a well-deserved hot chocolate. We sipped our warming drinks and watched skiers zipping all over the mountainside, some of them much higher up than we had ventured.

We briefly considered going to one of the spas, but as we were already feeling pretty relaxed, we decided instead to go for a wander around the town. We were unable to resist the call of various delicatessens, thick salamis hanging in the windows and displays of huge cheeses. We bought some of each, as well as a bottle of Merlot and retired to our cozy chalet to prepare a delicious supper. We cooked together, 8 of us in total, which might sound like too many cooks for the kitchen, but it worked. We whiled away the evening playing board games, drinking wine and chatting, full of tales of our experiences on the slopes. Now I finally understood the attraction of this particular sport.

Photo Credit: Photos are Katy’s own.