Snow ghosts stood sentry on the mountain ridges above Lake Pend Oreille as I drove the two miles across Long Bridge into Sandpoint. In the Idaho panhandle, wintry storms are wet enough to cover the evergreens in a lasting crystal-white coating that shimmers in the brilliant blue sunshine. Up close, the trees look sturdy enough to scale with ice climbing equipment, but from the valley, they look like the snow queen’s palace guard. 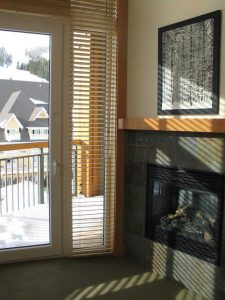 I’d just finished a big project and wanted to get away for a long, quiet weekend. A solo visit to Schweitzer Mountain Resort promised solitude: it’s a ski resort, and I don’t ski. I planned to veg out in front of the fireplace in my accommodations in White Pine Lodge overlooking the slopes.

There was so much to do without schussing downhill that I didn’t even finish the mindless murder mystery I brought along. The wintry scene out my window was so beautiful I couldn’t stay indoors.

The first afternoon, I rented snowshoes and poles and headed out for a walk on the beautifully groomed (and clearly marked) trails. The air was clean and crisp, and the silence broken only by the occasional cross-country skier or local resident running errands.

That was one of the surprises of Schweitzer. It’s not just a ski destination with day-trippers and vacationers, but a place for year ’round living. As one resident explained, as long as there’s good cell phone reception, high-speed broadband internet access and overnight delivery, why not live where the scenery is spectacular? I ran into accountants, artists, and authors who made the slopes (with a cute “alpine village” at the resort with restaurants, shops and services) their home base.

Part of the appeal is the valley. Schweitzer looks down on Lake Pend Oreille (pronounced “pond-er-ay”), a 148-square-mile lake named for an indigenous Native American tribe with a propensity for decorating their earlobes with hanging decorations. (Yes, “pendant d’orielle” means “dangling earring” and refers to the large shell earrings they wore.) 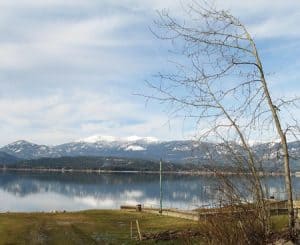 The lake is surprising deep — 1150 feet, carved by the melting of glacial ice sheets that filled the valley nearly a half-mile above today’s lake level.

The railroad arrived in Sandpoint in the 1880s — Amtrak still stops here (in fact, Sandpoint is the only Amtrak stop in Idaho). Lumber and mining were the main industries until World War II. That’s when the United States Navy arrived, creating the largest city in Idaho practically overnight.

In 1942, the second largest naval training station in the U.S. was built on the southern tip of Lake Pend Oreille. After the bombing of Pearl Harbor, the Navy wanted a hidden, inland base, and this spot was about 300 miles from the Pacific coast on a quiet body of water deep enough to simulate the ocean.

The Farragut Naval Training Station (decommissioned in 1946) brought 300,000 seamen to the area for boot camp — many of whom returned to the region as permanent residents after World War II ended.

The closing of Farragut (the area is now a state park) didn’t end the Navy’s involvement with the lake. At Bayview, just north of the former training station, the Navy operates the Acoustic Research Detachment, a small base (employing about 100) working on methods to make ships and submarines operate more quietly.

The lake is also popular with fishermen, and the region developed as a summer vacation destination for avid anglers. Winters were quiet, until a certain dentist from Spokane, Washington, named Jack Fowler stopped there in the early 1960s on his way home from a ski trip to Whitefish, Montana. He looked up at the “perfect; yet undeveloped” Schweitzer Basin in the Selkirk Mountains and wondered if he could shorten his weekend commute to the slopes. 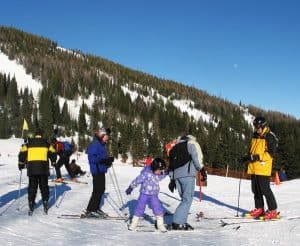 The rest, as they say, is history. Fowler gathered a bunch of investors, and bought a section –160 acres –from a lumber company for $3,200. Schweitzer Basin opened December 4, 1963, with $4 day passes for one rope tow and a mile long chair lift. In 1998, Harbor Resorts bought the resort. Today there are 2,900 ski-able acres.

My snowshoe excursion was such fun that I repeated the adventure the next day. On the third, I was ready for a bigger challenge, so I signed up for a cross-country ski lesson. My instructor was most patient, and by the end of the afternoon, I could manage, oh, several yards of forward motion without falling down. Yeah, it was harder than I thought (this novice is sticking to snowshoes).

On my final day at Schweitzer, I rode one of the ski lifts to the top of a ridge for a snowmobile excursion. I thought I’d be the passenger behind an experienced driver, but the guys at the Selkirk Powder Company convinced me I could pilot my own Arctic Cat. Following in the wake of a guide, soon I was zipping along a narrow path at 15 or 20 miles an hour with a wall of snow on one side and a sheer drop-off on the other was heart-stopping and breathtaking at the same time. 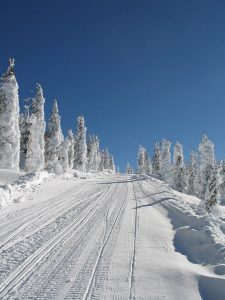 After snowmobiling I was ready to take leisure at a slower pace, so I drove eleven miles down the mountain to the town of Sandpoint.

My destination was the Pend d’Oreille Winery for a complementary tasting — they usually have eight bottles open for sampling (my favorite was a Malbec). On Fridays (and, often, Saturdays), live music and wine-by-the-glass draws people in town to visit the many arts and crafts galleries.

I didn’t have time to check out the local craft beer, but you might want to taste the samplings at Laughing Dog Brewing (they promise “fetchingly good beer”). Yes, of course, it’s a dog-friendly business.

The mountain is named for an early settler in the region. Legend has it that an old man built a rough cabin at the bottom of the basin of the Cabinet, Selkirk and Bitterroot mountain ranges more than a century ago. Little was known about him, other than at one time he had served in the Swiss military. The solitary figure became such a presence in the area that, some years later, locals in the nearby mountain town of Sandpoint would name Schweitzer Mountain after him: “Schweitzer” means “Swiss man” in the German dialect spoken in Switzerland.

(Note: the writer was hosted by Schweitzer Mountain Resort; the opinions expressed here are her own)

2 thoughts on “A Wintry Visit to Idaho’s Frozen North”