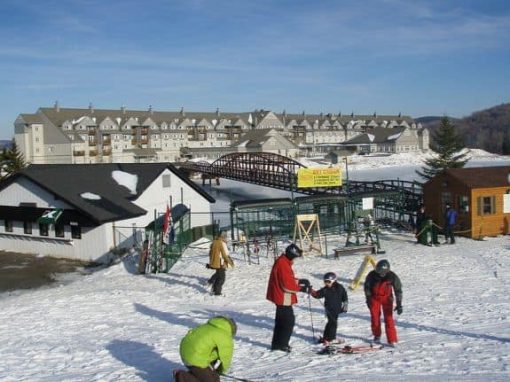 When the spectacular foliage of fall gives way to winter, Vermont becomes a playground for outdoor winter sport enthusiasts. Anything you can do on snow you can do — and do better — in Vermont!

There is no shortage of amazing skiing and snowboarding in Vermont, which boasts 20 alpine ski resorts and 30 cross-country touring centers. The very first ski town in the U.S. was built in Vermont in 1934, on a farm in Woodstock; the first chairlift was built in Mansfield just six years later, in 1940. Statewide, you will find more than 6000 acres of alpine terrain, over 1200 trails, 179 lifts, and almost 900 miles of cross-country trails. Not bad for a state that measures only 9615 square miles!

Burlington is a favorite ski destination due to both its annual yearly snowfall — 225 inches — and its snow making capabilities, which are among the best in the world. Average temperatures are relatively mild; average low temperatures stay in the teens while highs range from 24-37.4 °F. In addition to excellent weather conditions, Burlington is very accessible, with its own international airport that has direct flights from Chicago, New York, Philadelphia, and Washington D.C.

Many of the most popular ski resorts in Vermont are within an hour’s drive of Burlington, including Smuggler’s Notch, Sugarbush, and Jay Peak Resort. All three offer a variety of options for skiers of all levels, as well as off-slope activities. Among the après-ski and off-slope activities in Burlington are the ECHO Lake and Aquarium Science Center and the Vermont Pub & Brewery.

Here are a few spots in Burlington worth your consideration. 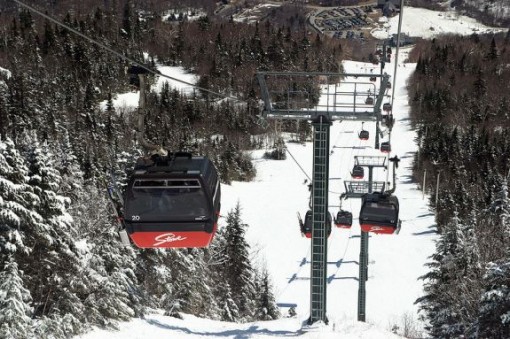 Year after year Stowe is one of the top destinations for skiers and snowboarders in Vermont. In fact, in 2009/2010 Stowe was voted the No. 1 Resort in the East by readers of Skiing Magazine. Perhaps Stowe is so popular because its annual average snowfall exceeds the state’s average by over 100 inches; Stowe gets an average of 333 inches to Vermont’s 225 inches. Average temperatures in November and December are in the 30’s, dropping into the teens during January and February, but bouncing right back for the last part of the ski season in March and April. Stowe is easily accessible by air, via Burlington International Airport, and is only a half-day drive from Boston (4 hours), New York City (5.5 hours) and Manchester NH (3 hours).

Mount Mansfield is the highest mountain in Vermont, and well-suited to intermediate and expert skiers, while Spruce Peak, which lies at a lower altitude, is more suited for a beginner to intermediate skier. In addition to the lifts at the individual mountains, there is an inter-mountain transfer gondola system between the two peaks.

When you aren’t on the slopes, check out some of Stowe’s other great attractions: The Alchemist Pub and Brewery, The Vermont Ski & Snowboard Museum, or take a break from the slopes with a cross-country skiing, dog sledding, or snowshoeing adventure.

At 4215 feet, Killington Peak is the second highest peak in the state and it is located in the Green Mountains, which is part of the Appalachian Mountain range. A long ski season that frequently begins in October and extends through May is one of the main reasons Killington is so popular.  It also boasts seven mountains with a wide variety of trails that suit every skill level, plus an extensive lift system which can complete over 43,000 rides per hour. Lift tickets and passes can be purchased online.  Adult, young adult/senior, and junior rates are available.

Killington has an exciting après-ski nightlife, with a variety of popular restaurants, clubs, and lounges for off-slope fun. Visit the Wobbly Barn for food, drinks, and entertainment and pick up your lift tickets, too.  Kick back with New York-style pizza and wings at Pizza Jerks; dance the night away at Pickle Barrel nightclub. If you need a break from the slopes, take in an exhibit at the Chaffee Art Center in Rutland.

Christina loves travel writing, and she has a particular interest in writing about adventure travel, food and drink. In addition to writing Christina works as a social media manager and consultant, helping people tell their stories online. In her spare time Christina enjoys reading, yoga, and spending time outdoors. Christina lives in Houston with her husband Josh and their dog, Sandy. You can follow her on Twitter @snowcones. Her top three travel spots are Alaska, Paris, and Western Canada.