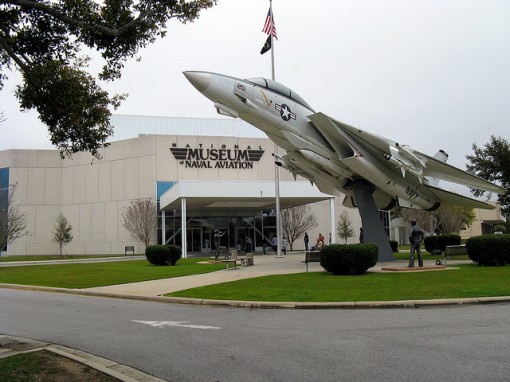 The coastal town of Pensacola, Florida, is home to the National Naval Aviation Museum located on the Naval Air Station Pensacola.  The facility is dedicated to showcasing naval, marine, and coast guard aviation exhibits.  The museum facility includes the two-story main museum, the recently opened expansion known as Hangar Bay One, and the outdoor Flight Line tour of aircraft.

The main museum is divided into two exhibit wings, a large atrium dedicated to the elite team of navy pilots known as the Blue Angels and an additional wing housing the  IMAX theatre.  Exhibits within the museum are grouped and dedicated to periods of aviation history including balloon flight, early aircraft, WWI, WWII, and space travel.

I  enjoyed the display on the early space uniforms, continuous playing footage of the astronauts in space, as well as a space rover.  Viewing the re-entry capsule was an instant flashback to hours glued to the television watching Walter Cronkite broadcast the details of each historical space flight. 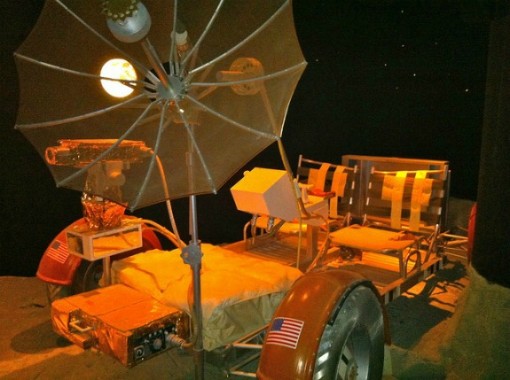 Hangar Bay One is the most recent expansion to the museum and includes 55,000 square feet of exhibit space.  Aircraft here date from the post-WWII era, and include a display about prisoners of war and of Coast Guard aircraft.  The highlight for me was Marine One, the helicopter used by the President of the United States.

Guided tours of the museum are held four times daily and are also free of charge.  Conducted by retired military personnel and other museum volunteers, the tours begin near the entrance and information desk. They tour volunteers are helpful and eager to answer questions.  Another volunteer-led tour takes place aboard a trolley that travels the flight line of the museum, an opportunity to view the over 50 aircraft there.  Although free of charge, tickets for the flight line tour must be picked up at the information desk. 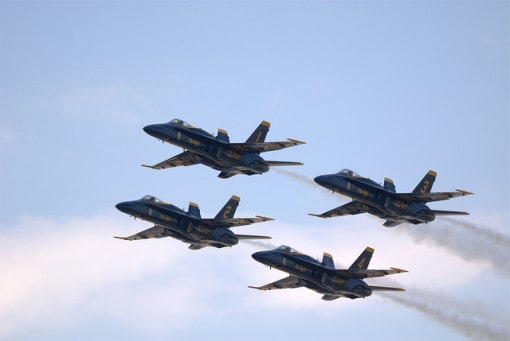 The United States Navy Blue Angels Flight Demonstration Squadron was formed in 1946 making them the second oldest flying acrobatic team in the world.  By performing at air shows and presenting a positive public image, the Blue Angels have been used as a recruiting tool for the Navy and Marine Corps since their formation.  As an extra treat, guests visiting on select dates, March through November, may witness a thrilling early morning practice session of the Blue Angels.  Practice is held in the skies above the airfield; they begin at 8:30 am and lasting approximately one hour.

Though bleachers are provided for approximately 1,000 visitors, guests are welcome to bring their own lawn chairs.  The roar of the jet engines can be rather loud so those sensitive to loud noises might want to bring along or purchase ear plugs available at the concession stand. As the museum itself does not open until 9 am, several convenience stations are also conveniently located within this area as well. 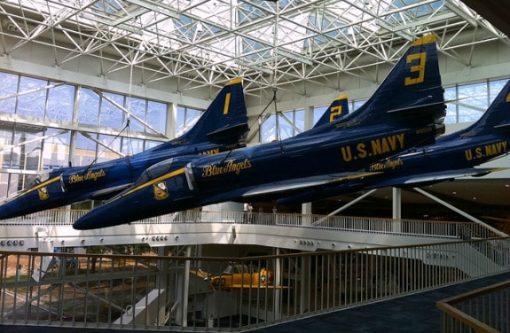 A schedule of practice sessions is listed and includes most Tuesdays and Wednesdays.  Visitors on Wednesday may enjoy the bonus of meeting the pilots and collecting autographs following the practice.   I was fortunate enough to visit on one such Wednesday.

After watching a breath taking jet demonstration full of  quick maneuvers, diving, looping and performing difficult and synchronized formations, we waited in the Blue Angels Atrium for the pilots to appear.  Looking up, we had the opportunity to take a close-up view of three iconic gold and blue performance jets that are  suspended overhead.   Thunderous applause erupts as the men in uniform make their entrance, a sound that could be heard throughout the museum.  (NOTE: Practice sessions may be canceled without notice due to weather conditions.)

I was concerned by the large number of people that descended upon the museum at the conclusion of the practice, fearing that the exhibits would be overcrowded and difficult to see.  Don’t worry – there is ample space with numerous exhibits and the crowd quickly disperses throughout the museum.

To truly experience the museum, guests should allow 3-4 hours.  Snack and lunch items are available at the Cubi Cafe located on the main floor or wait to enjoy the local flavor of the area restaurants, including the popular LuLu’s of Homeport Marina.

Since the museum and airfield are accessed by entering the air station, visitors must pass through a security checkpoint.  All vehicles will be stopped and the driver will be required to produce identification.  As this can be a lengthy procedure, plan your arrival accordingly to allow for delayed traffic.

Admission: Free. Donations are accepted and appreciated. For a fee guests can attend a showing at the IMAX theatre or test their skills on several flight simulators including the extremely popular 3D version.