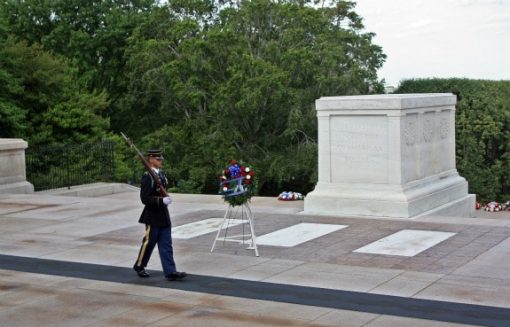 Visitors to the nation’s capital, have long made Arlington Cemetery an important visitation spot.  Located in Arlington Virginia, across the Potomac River from Washington DC, Arlington is the most well known cemetery in the United States.

About 230,000 veterans and their dependents are buried on this 624 acre site, which is one of the most visited tourist sites in the Washington DC area.  It is a fully operation cemetery, with an average of 27 funerals conducted each workday.  The rolling hills provide a peaceful backdrop to the monuments and gardens through the cemetery, and you can’t help but find yourself whispering as you walk through this tribute to the service and sacrifice of those laid to rest here.

Start your visit at the Visitors Center located at the cemetery entrance.  You can find maps, guidebooks, information about grave locations, along with some exhibits and displays.  There’ is a small bookstore, and if you’re a fan of history you may just get caught up here for awhile.  If you’re looking for the location of a particular grave site, you can do a little advance research or just ask for help at the Visitors Center when you arrive.

One of the most often visited spots in the cemetery is the Tomb of the Unknowns, also called the Tomb of the Unknown Soldier.  It sits in the Memorial Amphitheater, on a hill overlooking Washington, with sculptures of three Greek figures (representing Peace, Victory, and Valor) standing by.  Inscribed on the back of the Tomb are the words:

an American soldier known but to God

One of the most impressive sight at the Tomb of the Unknowns is to watch the changing of the guard.  A uniformed guard, walks guard in front of the Tomb with a ritualistically precise 90 steps per minute, and the changing of this guard brings tears to the eyes of most visitors.  This precise military ceremony happens every hour during the fall and winter, and every half hour during the spring and summer.  The ceremony starts with a uniformed relief commander asking the visitors to stand and remain quiet during the ceremony.  The somber ceremony includes an inspection of the guard’s weapon, a salute to the Unknowns, and the transition of a new guard into place.   The new guard then continues the pace, marching marches 21 steps down the black mat behind the Tomb, turns, faces east for 21 seconds, turns and faces north for 21 seconds, then takes 21 steps down the mat and repeats the process. 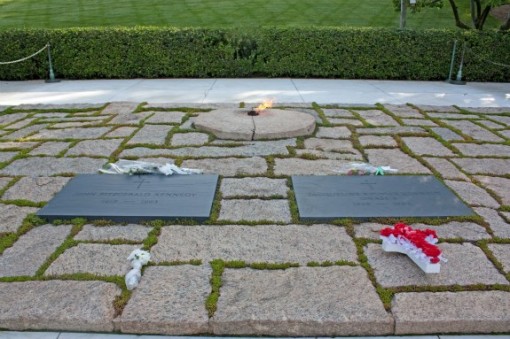 Another much visited spot in Arlington Cemetery is the Eternal Flame at the gravesite of President John F. Kennedy.  Upon entry to the cemetery, a sign points the way to the Kennedy gravesite.  At the head of the JFK gravesite, is the Eternal Flame.  The flame was lit by Jacqueline Kennedy at the time of his burial, and has only been extinguished once – when a visiting group of Catholic school kids poured holy water directly onto the flame.  A sprinkle, as it should have been, would not have extinguished the flam, but the dumping cause it to go out.  It was quickly relit by a guard standing nearby.  A continuous spark re-ignites the flame should it be temporarily put out by weather.

In this gravesite lies the President, two young children who preceded him in death, and Jacqueline Kennedy Onassis.  The graves of Senator Robert Kennedy and Senator Edward Kennedy are nearby the main grave site.

Other areas that may interest visitors include:  the Memorials to the Space Shuttles Challenger and Columbia, Arlington House (the former estate of Confederate General Robert E. Lee and his wife Mary Anna Custis Lee, great granddaughter of Martha Washington), and the Robert E. Lee Museum.

Metro:  Located on the Blue Line, get off at the Arlington National Cemetery Station

Note:  Only bottled water is allowed on cemetery grounds, no other food or beverage.  It’s a good idea to bring some, especially during the hot and crowded summer time.  There are drinking fountains at the Visitor Center, and a veterans group usually offers bottled water for purchase.