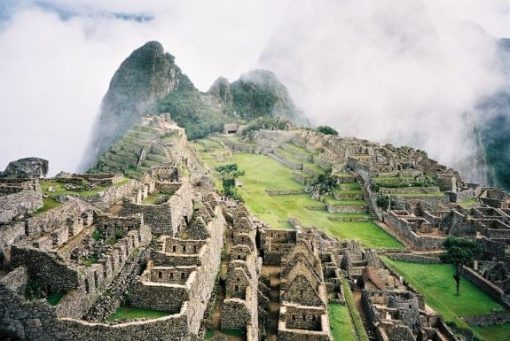 When I was a little girl and my parents first walked me into the cool interior of our church sanctuary, I just got it – this was an important place. I had that same feeling when we arrived at Machu Picchu. There was a reverence about being high up on that mountain that was unmistakable. Plus, the view was simply gorgeous.

I’ve heard the expression “being on top of the world” many times, but being able to tour Machu Picchu, I felt like I understood that expression in a whole new way. We were standing on the ruins of ancient buildings, perched on a small plateau nestled in the mountains, with peaks all around us. The sky had a clarity to it that was hard to describe, a more rich, vibrant and deep blue than I’ve ever seen at home.

As I looked at the remains of the citadel which, according to Machu Picchu history, were made with intricate craftsmanship, it gave me a deep sense of how important this location must have been to the ancient Incas. The walls’ design details helped protect them from collapse in an earthquake, and our guide pointed out that the doors and walls were trapezoidal (an uneven rectangle which is wider at the bottom than the top), with rounded corners and other features to make them stronger. All that work and effort to build a temple in this spectacularly remote spot helped me realize how the Incas must have really been connected to this place.

As the tour guide showed us around the ruins, I began to appreciate how large this lost city of the Incas would have been. First we visited the agricultural section, where there was enough land to grow food for about four times as many people as had ever lived there. From a distance the row upon row of farming terraces, like a series of wide stair steps supported by brick walls on the downhill side, showed the same ingenuity of the stone builders. As we got closer, I saw how uneven the terraces were, just little plots carved out to fit the terrain of the mountainside. This method of farming at Machu Picchu is quite impressive. As the clouds started rolling in below us  we could no longer see the valley below, creating an eerie feeling.

Next, we walked about the urban sector of Machu Picchu, which had three different areas. The residential district ws where the lower-class people lived in simple houses and small storage buildings. The nobility lived among a separate group of houses. The Sacred District is where “the Room of Three Windows” and the primary archaeological treasures were to be found, all dedicated to the sun god, the greatest deity of the Incas.

As we looked around the Temple of the Sun, I was fascinated by one ruin with rounded walls, almost like a castle tower, and the bricks fitted so well into the curve of the wall. Once again I was struck by the loving care of the workmen. All that extra effort to make their sacred area special  is astonishing. I looked down over more brick ruins on the terrace below us, falling away to a deep valley with a sheer mountain peak facing us, and was once again captivated by the breathtaking beauty of the lost city of Machu Picchu. It was a very spiritual moment for me.

Later, we walked back to the Machu Picchu Sanctuary Lodge where we were staying, only a few minutes away from the actual ruins. Staying there made the time we spent at the citadel all the more special as our group had gotten up early to watch the sun rise over the ruins before any other tourist arrived, again an amazing, reverent moment. Experiencing Machu Picchu up close reinforced the awareness of seeing something really important – just like walking into church with my parents many years ago.

Author bio:  Carol Atkins has been traveling the globe for much of her life.  She loves of all types of travel expeditions including island hopping, hiking, cruising and being lazy on the beach :).  She recently went on to Machu Picchu and loved every minute of it! When she isn’t traveling, she’s a freelance writer for Travcoa.com.  Follow her on twitter @atkins_carol.