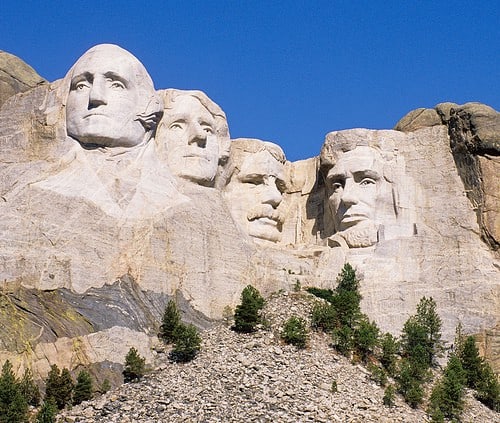 Named after the Lakota and Dakota Sioux Native American tribes, much of South Dakota’s culture reflects that ethnic heritage. It also boasts a tourism focus that includes prehistoric beasts, world-famous pioneers, Native and wild west legends., all of whom called South Dakota home at one time.

If you’re planning a visit to the state, a good starting point are these Great 8 lankmarks:

This attraction is one that keeps visitors coming year after year. The mountain carving features the 60-foot faces of four great American Presidents: George Washington, Thomas Jefferson, Theodore Roosevelt, and Abraham Lincoln. Work on the sculpture began in 1927 when sculptor Gutzon Borglum was 60, and ended 14 years later at his death.

Also on-site, the Lincoln Borglum Visitor Center and Museum includes more than 400 artifacts and 300 photographs. The Presidential Trail is a half-mile walk that loops along the base of the mountain offering a close-up view of the faces.

A fifth granite face has emerged in the Black Hills. The colossal Crazy Horse mountain carving can be seen just 17 miles from Mount Rushmore National Memorial. Sculptor Korczak Ziolkowski started work on the mountain in 1948 as a tribute to American Indians. Following his death in 1982, Korczak’s family continues to carve the mountain, using three books of his detailed plans. When complete, Crazy Horse will be the world’s largest mountain carving, standing 563 feet high and 641 feet long.

Also nearby is the Minuteman Missile National Historic Site.The drama underlying the Cold War is relived at this National Historic Site near Wall. Visitors can see how the end of the world could have begun. This is the first national site in the world dedicated to commemorating the events of the Cold War. Delta-09, an underground concrete silo on the edge of Badlands National Park, held a Minuteman II missile that could send a nuclear weapon to the Soviet Union in 30 minutes.

One of the nation’s oldest National Parks, Wind Cave became part of the park system in 1903. The park began with the cave and some surface land, expanding in later years to present 28,295 acres above ground. Today, Wind Cave actually houses two worlds, the terrain and wildlife of the surface, and the hidden labyrinth beneath the surface.

The cave system is one of the longest in the world, with more than 100 miles of rare and unusual boxwork, frostwork and popcorn formations. The cave is named for the barometric winds at its entrance.

West of Custer is an underground wonderland far removed from the forests and mountains above, but still an integral part of the Black Hills. This is the maze of Jewel Cave, the third longest cave in the world with more than 164 miles of mapped and surveyed passages.  Jewel Cave takes its name from the glittering calcite crystals that line its walls.

The Missouri River served as part of the trail Meriwether Lewis and William Clark traveled as they explored the new territory, making history a vital part of the communities that line the river. Today, visitors take advantage of hiking, biking, and camping as well as water activities such as fishing, kayaking, and skiing. Four reservoirs, created as a result of damming the river, allow for even deeper fishing waters and sailing.

The portion of the river from Fort Randall south to Nebraska is known as the Missouri National Recreational River. This stretch of the river is protected by the National Park Service and looks today just as it did when Lewis and Clark explored that area in 1804 and 1806.

There are few truly wild places left in this country. Custer State Park is one of them. Nearly 1,300 magnificent bison wander this park’s 71,000 acres, which they share with swift pronghorn, shy elk, sure-footed mountain goats, and a band of curious burros. Slender granite formations, called Needles, dominate the skyline and grassy meadows fill the valleys. Amidst the pure nature, you’re free to explore via trail rides, scenic drives, mountain bikes, paddle-boats, hay rides, and safari tours. Five lodges in the park provide beautiful accommodations for a great night’s sleep after a long day exploring. 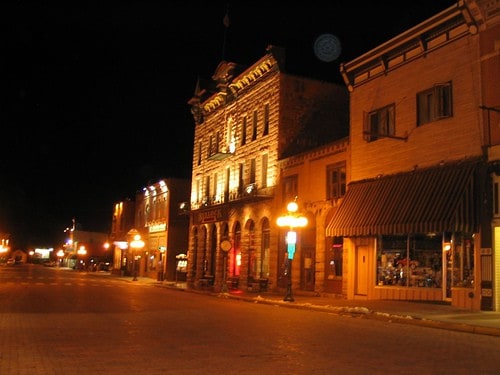 Follow in the footsteps of legends as you explore the beauty and history of this Wild West town. The entire town of Deadwood is a Registered National Historic Landmark, and ongoing restoration has transformed this community back into the frontier town that once drew fortune seekers looking for gold. The famous and infamous that have left their marks here include Wild Bill Hickok, Seth Bullock, Calamity Jane and Poker Alice.

In addition to all of this Old West history, Deadwood offers plenty of modern-day luxuries. New day spas, tasting rooms, modern gaming halls and entertainment add to the lure of this legendary historic town.