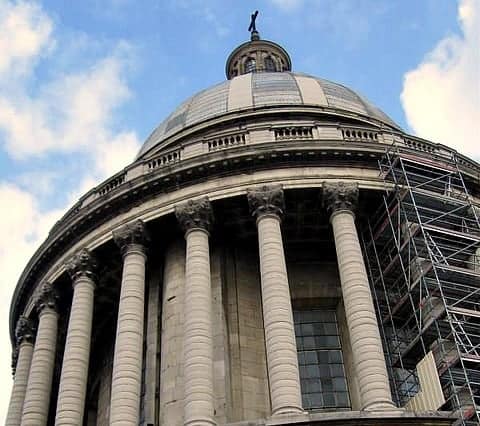 The Paris Pantheon is a neo-classical church in the Latin Quarter (5th arrondissement) of Paris that was modeled after the Pantheon in Rome.  With a dome similar to the one on St Paul’s Cathedral in London, the Pantheon was originally an abbey , but today serves as a glimpse of history as the burial place for French heroes, leaders, artists, and writers.

The Paris Pantheon was built because of a promise made by King Louis XV.   The kind was suffering from severe illness that doctors were unable to treat or resolve.  As many sufferers do, King Louis vowed that if God helped him recover from his mysterious illness he would use his power and wealth to build a worthy monument to the patron saint of Paris, Saint Geneviève.  Whether God intervened to save King Louis, or whether his diet and lifestyle changed to solve the illness now believed to have been gout, he did get better.  And he kept his promise too, beginning construction of what was to become the Parthenon in 1758.

The 1700s were as rife with cost overruns and budget delays as the 2000s, and it took over 30 years to complete the Pantheon.  Just in time for the beginning of the French Revolution.  And with the snap of fingers, the Revolutionary government soon deconsecrated the abbey, nationalized it, and turned into a mausoleum for the interment of great Frenchmen, great Frenchmen being defined at that time as those sympathetic to the Revolution.

Since revolutionary times it has twice reverted back to a church before becoming the mausoleum that it is today. The Pantheon is basically a cross-shaped building with a domed center.  When I walked in, it felt big and empty and I immediately dropped to my “inside voice” as sounds seemed to ricochet off the stone walls.  Walking along the interior walls of the building you can follow the history of Paris through murals depicting historical religious and revolutionary figures.  My favorite was the series depicting the story of Joan of Arc.  Statuary and frescoes fill niches along the wall and sit atop pedestals placed in the interior.

The focal point of the interior of the Pantheon is Foucault’s Pendulum, named for Leon Foucault who, in 1851, built the pendulum to conduct experiments demonstrating the rotation of the earth.  Standing nearly 220 feet high, the pendulum is situated directly beneath the dome.  Its simple lines and perpetual motion is mesmerizing; stand and watch it for awhile and see if you don’t agree.

Allow 30 minutes to an hour to enjoy and appreciate the art and history of the Pantheon, and then head down to the necropolis or head up to top of the dome for one of the best views of the city.

The necropolis, or mausoleum, is the burial site of many famous Frenchmen.  And one famous Frenchwoman.  Over the years a fierce debate has raged on about who deserves and doesn’t deserve to be buried in this sacred site.  Today it takes an act of Parliament – literally – to be buried in the Pantheon.  Some of the notable Frenchmen buried here include:  Alexandre Dumas (author of the Three Musketeers), Victor Hugo (author of Les Miserables and The Hunchback of Notre Dame), Voltaire, Rousseau, Emile Zola, Rene Descartes, and Louis Braille.  And that lone Frenchwoman?  Marie Curie, who is buried here along with her brother Pierre. Heading to the top, it’s a 206 step guided-tour climb to the colonnade beneath the dome, and open only from April through September.  Calling it a “guided tour” is a bit of a misnomer.  There’s no tour.  The way is narrow and steep, and can be a bit disorienting – your guide just leads the way up so you don’t get lost.  The tour leaves at various times, so check for a convenient departure and use the rest of the time to enjoy the interior.  You only need a minimal level of fitness to make the climb.  It’s not a race to the top – you can go slow and rest along the way if you wish.  Take all the time you need because when you get to the top and walk outside the 360 degree view of Paris may just take your breath away.

Once you’ve made it all the way to the top, enjoy the fresh air and the views of the city.  If it’s a nice day you can see for what seems like forever.  Make sure you’ve allowed plenty of time to take photos (you did bring your camera, didn’t you?) and spend a little time outside before heading back into the narrow labyrinth to go back down. Unfortunately, while I enjoyed my time at the top of the Pantheon’s colonnade, it is now closed for restoration work to the Dome.  The interior of the monument is open, as is the necropolis, but it the upper part won’t open until spring 2014.

Location:  The Pantheon is located at Place du Pantheon (5th arrondissement), and is easily accessible via the Cardinal Lemoine metro stop or the Luxembourg RER station.

Hours:  Open 10 am-6:30 pm April through September, closing at 6 pm throughout the rest of the year.  The last admission is 45 minutes prior to closing.

Admission:  8,50 € adults, 18 and over.  Admission is free for those under 18, disabled visitors and their escorts, visitors 18-25 who are citizens of one of the EU countries or who are non-European permanent residents of France), and the unemployed.  Rates are often increased slightly during the summer.

Note:  The Pantheon is included on the Paris Museum Pass.  If you’ll be visiting several attractions during your stay, the pass may be a great value.

1 thought on “Pantheon: History in Paris”