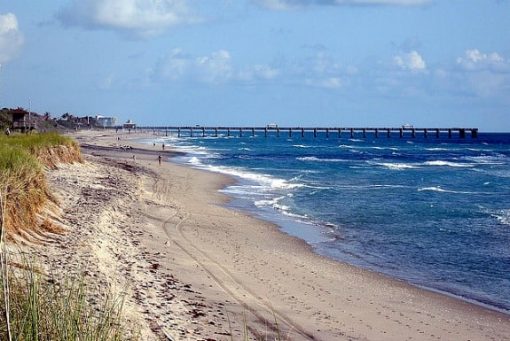 The Palm Beaches of  Southeast Florida provide an abundance of sunshine, entertainment and attractions often expected from a warm weather vacation destination.  While some might be drawn to the miles of uncrowded beaches, others might head for the history laden Jupiter Inlet Lighthouse and Museum.  I myself, prefer spending time at the Loggerhead Marinelife Center in Juno Beach.

Located directly on the Atlantic Ocean, The Loggerhead Marinelife Center is a non-profit education and ocean conservation facility dedicated to promoting conservation of Florida’s coastal ecosystem.  The Center empathizes a special focus on threatened and endangered sea turtles.  Juno Beach is recognized as one of the most active nesting beaches for sea turtles in South Florida, so a rehabilitation facility here seems quite appropriate.

Eleanor Fletcher, a longtime Juno Beach resident, worried about the continued encroachment of humans and the threat to the environment of these gentle sea creatures.  Over 25 years ago she began educating children about conservation and the protection of the turtles.  What began with talks in her home and at local schools evolved into  a small museum and later the opening of a new 12,000 square foot certified “green” facility known as The Loggerhead Marinelife Center.

Located within Loggerhead Park, a public beach front park maintained by the Palm Beach County Park and Recreation Department, the park contains a nature trail, a playground, picnic pavilions and lifeguard protected beach access.  The park is a great location for a full day of adventure with guests exploring the Marinelife Center early in the day and later enjoying the Atlantic Ocean beach where so many sea turtles come to nest. 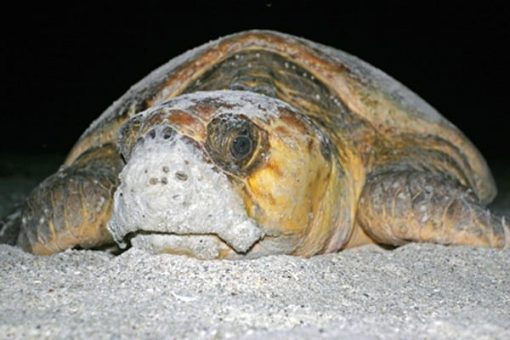 The Center displays numerous marine life and local wildlife exhibits.  The soft lighting and cool shades of blue painted on the walls of the exhibition hall provide a relaxed setting and creates the feeling you are swimming underwater. Pulling open drawers tucked under the displays reveals a variety of shells and models of sea creatures.  Other exhibits include resources on local wildlife and the importance of conserving the South Florida marine environment.

Aquatic displays are filled with live salt water creatures.  One tank that I found particularly interesting, and a bit shocking, contained a number of the beautiful and showy Lionfish.  Known for their venomous fins, Lionfish are native to the regions of the Indo-Pacific.  But they were unintentionally introduced to the Atlantic Ocean, most likely deposited there by disenchanted aquarium owners, and this invasive breed has thrived in the warm waters off the southeastern coast of Florida.  Rapidly multiplying, the Lionfish now pose a threat to true native species, and a concerted effort is underway to eliminate the threat.

A research lab, resource center, an outdoor classroom, and a state-of-the-art veterinary hospital are all located within the campus of the Marinelife Center.  Devoted to the treatment of injured and recovering sea turtles, the treatment rooms of the hospital are visible to the public through an observation window on the exterior of the building.  Injured and recovering turtles receive a variety of treatments from ranging from medication, physical therapy, to the occasionally a surgical procedure.  Visitors to the Center can observe, at various times throughout the day, staff members feeding the patients.

I was particularly drawn to the large outdoor tanks that hold the live sea turtles.  Large enough to provide adequate space for the turtles to move about, the tanks arestill  small enough to allow the turtles to be easily visible to visitors.  Windows on the sides of the tank grant curious visitors a unique underwater view.  Signs placed outside the tank, reveal information about the patient, including their name, the injury sustained, steps to recovery and projected release plan.  Some of the injuries sustained by the turtles, especially those caused by boat motors to the turtle’s shells, are quite graphic and difficult to look at without wincing. 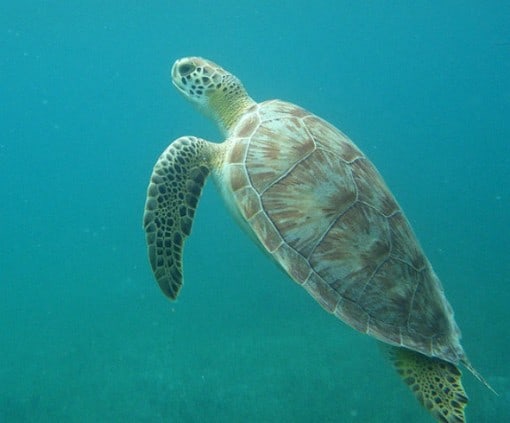 If you find yourself, like me, wondering about the turtles after you have left the Center, a new live camera feed or turtle-cam can allow a sneak peek at the recovering patients.  Additionally, several turtles are fitted with a tracking device prior to their return to sea, sending back vital information to the researchers.

Visitors can not only view patients, but participate in classes as well as special events at the Marinelife Center.  For me the experience of a lifetime would be to join in one of the turtle walks offered in June and July.  Turtle experts lead the nighttime talk and walk along the beach offering a chance to see a sea turtle laying her eggs.

Nesting season takes place March 1 – October 31, so if you are taking a trip to the  area of the Palm Beaches, take into consideration these steps to protect nesting turtles:

On a vacation to Juno Beach in late spring, I was surprised to discover a turtle nest in the middle of the beach, directly in my path.  A turtle had laid her eggs in the middle of the sand rather than up among the undisturbed sea grass.  I was glad that researchers had carefully marked the nest so that I was able to avoid a disturbance.  With the care, conservation, and education provided by the Loggerhead Marinelife Center, sea turtles and other marine life will be visiting the beaches of Palm County for years to come.