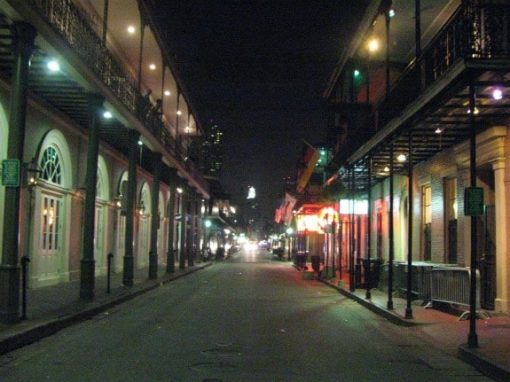 Everybody loves a good ghost story. Or, a vampire tale or a witches scare.  Have any idea where the number one city in the United States is that you can find this all in one place?

From local ghost and vampire tours to tea leaf readings and a look inside a real voodoo museum, good food and music is really just skimming the surface of what this famous old French city has to offer.  Indeed, there are many amusements in New Orleans, but on a recent visit I was most amused by the spooky, psychic diversions.

Let’s take a look at some of the haunted and spooky tales that are told throughout the Big Easy and remember it was in New Orleans where author Anne Rice penned her vampire novels so let’s start there.

A company called Haunted History Tours specializes in a number of spooky outings, but the vampire tour is sure to get your blood pumping.  The tour allows you to enter into the dark and mysterious world of the undead. You will also have the chance to learn about New Orleans’ history and visit locations that have long been associated with the creatures of the night.  Are there vampires in the French Quarter? You be the judge and while you’re at it asked about the legend of the coffin girls too.  $20 per person.

New Orleans is deeply rooted in Catholicism and voodoo.  But don’t despair; a voodoo queen will not place a hex on you the moment you step foot in the city.  In fact, the legendary voodoo queen of New Orleans died in 1881. But while she was alive, she was a force to be reckoned with according to many stories.  Marie Laveau was one of the most famous names in New Orleans in the 1800s, and 19th century travelers always visited her before leaving the city.

Today there is still evidence of how deeply rooted the voodoo tradition is in New Orleans.  Take, for instance, the Voodoo Museum on Dumaine Street.  For a small fee you can tour the museum and in the back room there are two large pythons that are used in modern day voodoo ceremonies. The museum also offers a tour of St. Louis Cemetery #1 for $19.  On the tour you will learn voodoo recipes, curses and spells.  More importantly, you learn a little history of this ancient and secret religion. I even learned a spell myself, how to make a wish.  Instructions:

You’ll see a lot of red X’s on those graves. Many of the graves have been robbed.  And, in New Orleans where the graves are built above ground because of the high water table, it can be quite interesting to look into an empty tomb.  During your cemetery tour, you will invariably visit the tomb of voodoo queen Marie Laveau.  Even today you will find her tomb adorned with burnt candles, flowers and voodoo offerings.  You might even see an actual voodoo ceremony.

While there are many ghost stories that abound in New Orleans proper, it’s a must to get out of town and visit two of the most very haunted plantations in the area both the Myrtles and Oak Alley Plantation.

The Myrtles is a renowned haunted house listed by the federal government as one of only 10 authentic haunted houses in the country.  The Myrtles is an antebellum mansion located in St. Francisville. It was named in 1796 after the lovely pink myrtle flower.  I spent the night in the garden room in the back of the house and took a tour of the place.  I felt as if I was in a crowded room when there were only a few of us on the tour.  The fact that at least 10 people have died violent deaths at the Myrtles explains its haunted reputation.

The first series of deaths was due to the owner of the Myrtles having an affair with one of his slaves.  The slave’s name was Chloe. Chloe lived on the plantation and after the owner tired of her, she decided to seek revenge. She poisoned his wife and two daughters with oleander flowers in their dessert one evening. The other slaves were furious at what Chloe had done and decided to take matters into their own hands instead of waiting for the law.  They dragged Chloe down to the banks of the Mississippi River and hung her from a tree.  After she was dead, they tossed her limp body into the water.  Chloe is said to haunt the house along with the two young daughters.

There are other ghosts there too.  There’s the French governess and the Confederate soldier who takes up residence in the green room during May and June every year. There is an old slave graveyard in the back of the house that is surely home to a few spirits still living there. I heard there has only been one séance allowed to take place in the house. While the psychic was in a trance, one hand of the grandfather clock flew off and into the room.  The owner does allow guests to tape the ghosts.  The best way to do that is leave a tape recorder running in an empty room.  Between the unearthly noises caught on tape and some of the strange happenings, a visitor to the Myrtles can’t help but wonder just how many ghosts really haunt this beautiful home.

Oak Alley Plantation is another old mansion that is said to be haunted.  A picture, taken by a visitor years ago purports to show one of the ghosts, a lady in a black dress.  Others have claimed to see this same woman pacing the widow’s walk or riding horseback underneath the massive oak trees.

In the city of New Orleans proper, a few of the most haunted sites include the Monteleone Hotel where you can stay in a haunted room or the Bourbon Orleans Hotel, which is also rumored to be haunted.  Mystere Mansion and the Haunted Mortuary is a historic mansion operated for 80 years as a real mortuary and now offers some of the best in haunted tours and ghost hunting, call for prices as they vary depending on the season.

Other Spooky Things to Do

If you have never had your tarot cards or tea leaves read, New Orleans is the place to do it.  There are tarot card readers on just about every corner in the French Quarter, especially around Painter’s Alley.  They will give you a quick reading and usually direct you to a shop where you can pick up something for what ails you –  from Love Oil, Courting Powder, Controlling Powder, Boss Fix Powder or the all important gris gris bag said to keep evil spirits away.

One real treat beyond the tarot readings will be finding your way to a tea leaf reading at the Bottom of the Cup Tearoom.  Reading prices vary and are by appointment, but the place has been in business since 1929.  The Bottom of the Cup Tearoom is known nationally for the its tea leaf readings and the woman who read my leaves came strangely close to some personal facts that she could not have known.

If you do happen to be in New Orleans on Halloween stick around and take advantage of All Saints Day on November 1 as well.  New Orleans is the only city in the United States to celebrate All Saints Day.  It’s a time when the locals visit the cemeteries in honor of the many saints recognized in the Catholic religion.  Even better is that it is a family-oriented activity with beautiful candles being lit throughout the city’s cemeteries.

Otherwise, just keep your eyes open and see if you can find your own vampires, witches, voodoo practitioners or even a ghost or two walking the street of this historic, but vibrant city.