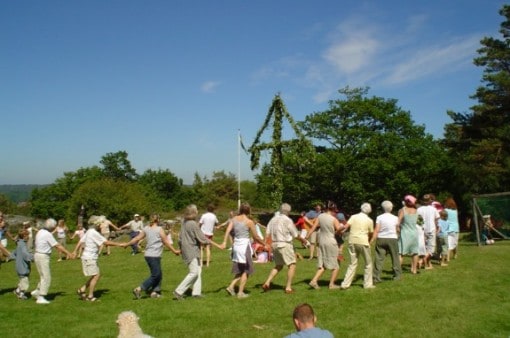 The Swedes just love their Midsummer celebration.  In fact, Midsummer is one of the biggest celebrations of the year in Sweden.  Since the Swedes must endure the long, cold winters, even just a first touch of warm weather gives them a good excuse to get outside and celebrate.  Traditionally a pagan ritual, Midsummer was the night when folks believed that love and health and prosperity could be attained for the coming year.

Held every year on the first Friday after June 21, Midsummer celebrations include traditional Swedish food, the decorating of the Maypole, and dancing.  It’s an all day event, and it’s said that single women will get a look at their future husband in their dreams on summer solstice night.

The first thing the Swedes do to get ready for Midsummer is to erect and dress the Maypole or midsommarstång on Midsummer Eve.  The Maypole is in the shape of a wooden cross with two circular wreaths hanging from its ends.  The Maypole is decorated with lots of greenery, birch leaves, and flowers of all kinds and colors.

The Maypole is raised in the afternoon in the location where the party and the smorgasbord feast will take place so everyone in attendance at the Midsummer party has to help raise the pole in celebration.  The party starts by dancing around the Maypole in a circle.  The dancing is easy and it is basically just dancing in one direction, then changing direction at intervals.  The dancing and singing begins on Midsummer’s Eve and doesn’t end until the next night.

Many towns throughout Sweden also have a Maypole erected in the town square for the entire village to celebrate, but even so, locals almost always finish the party at a home with family and friends in attendance.

The Midsummer feast almost always includes new potatoes with dill, sour cream and pickled herring. This is also the time that the first strawberries can be found in Sweden so heaps of strawberries are served along with a good bit of whipped cream on top.  The Swedes love herring and there are hundreds of variations, from lemon, to snapps, from herb and onion to vinegar.

Alcohol is also a tradition to wash the food down, generally beer, wine, or sometimes a shot of alcohol like spiced schnapps.  People drink to celebrate a long life, love, and fertility.  Every time the glasses are refilled, singing breaks out celebrating the day.

Dressing for the Midsummer

Dressing in the proper Midsummer attire is almost as important as the party.  Swedes gather wild flowers to add to their costumes, which in the case of women are usually white dresses.  Flowers are also worn the hair, usually bound together into garlands like a crown.

Music for the Midsummer

There are also a number of more traditional dances like Håkan Petersson that offers an explanation through dance explaining what Midsummer is all about.

Midsummer is all about men and women coming together and flirting and having a good time.  In fact, many of the songs and dances reflect this overt flirtatiousness and subtle innuendos.  When the dancing and revelry is finally done, the women go out into nature and pick seven wildflowers.  They put put the flowers under their pillow on Midsummer Night in order to dream of their future husband. Women who are married do this too, dreaming of their current husband and the love the two have for one another.  As a side note, statisics show that more babies are born in Sweden nine months after Midsummer than at any other time of year.

Midsummer was also a time when folks, particularly from the countryside, felt that goblins, fairies and trolls roamed the Earth for the good or bad and in some cases these legends still live on in the smaller towns.

Midsummer is a celebration that has lasted in Sweden through the centuries and it’s certain to be around for many years to come.

This trip was hosted by the Swedish National Tourist Office; the opinions and recommendation are those of  the writer.