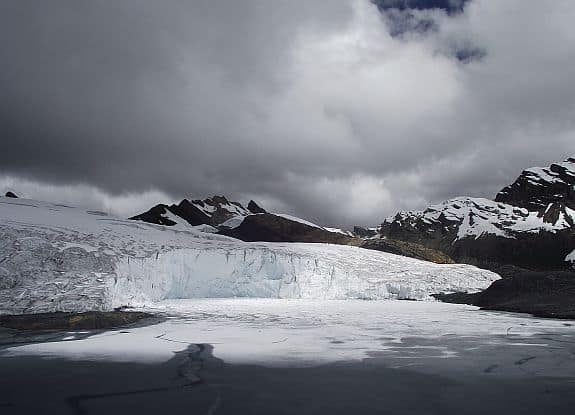 The world at 16,000 feet above sea level is a very strange place indeed. It is a bleak, empty place, bone-chillingly cold and distinctly lacking in oxygen. This is reality in the highlands of Ancash, Peru. It is home to the Cordillera Blanca mountains, which form an impressive section of the Andes. I was beginning to wonder what on earth I was doing there.

I had started out that morning from Huaraz, one of the bigger towns in the region and the central hub for tourists to Ancash. It is a much more normal environment, although still at high altitude and with impressive mountain views. It is a 9-hour bus journey from Lima, which costs about $10. Flights between the  places do exist, but only on certain days and will set you back about $150 one way. You would really only go to Ancash for one reason: to explore the Andes. Huaraz is bursting with tour agencies offering excursions into the mountains, with everything from grueling 10-day expeditions to single day trips. My friends and I decided that we wanted to visit Pastoruri glacier, located in the Huascaran National Park. We visited the Quechuandes tour agency in Huaraz, where we booked our full-day trip, costing us about $20 each. The woman didn’t exactly give us the hard-sell: “It’s not the best glacier,” she shrugged, “but it’s alright”.

It was with that glowing endorsement in mind that I found myself near the top of a mountain, on the back of a horse, letting it pick its way nimbly across the stony ground, following a path it knew well. When we reached the plateau, I dismounted and returned the horse to its owner, a hardy-looking man dressed in Alpaca wool clothes to keep him warm. We had to continue on foot. We knew it couldn’t be much further, but walking suddenly seemed like a difficult task. Every step took a huge effort. We were bundled up in fleeces, coats, hats, scarves and gloves, but we were still cold. The air was icy. We barely spoke to one another; we didn’t want to deplete the oxygen any more than we had to. The ground was made up of layers of eroded rock, shimmering with iridescent colors and formed into beautiful patterns, but every time I bent down to look more closely, I got head rush standing back up. It was completely surreal, like walking in a dream. There was an ambulance in the distance, reminding us all too clearly of the dangers of being at this altitude.

Finally, after what seemed like forever, we saw a patch of snow on the ridge ahead of us. I felt my heart sink. Was that it? But then we reached the summit and the vista opened up before our eyes, revealing the full glacier. A sheer wall, seemingly made up of thousands of shards of ice, seemed to hang in suspended animation, reaching down to a frozen pool. On top, it was brilliant white, stretching as far as the eye could see. In the distance, we could just make out the multicolored figures of extreme skiers taking part in the annual competition held on the glacier. 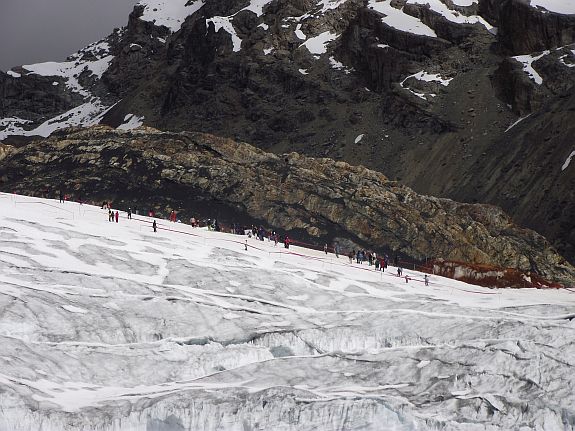 It was one of the most magnificent things I have ever seen. I just could not take it in. My friends seemed just as awestruck and we stood for several minutes, gaping and feebly muttering words like: “wow”, aware just how useless words were when it came to describing the view in front of us. It was incomprehensible to think that this was a less impressive glacier. It was almost like looking at a black and white picture: The top of the glacier was dazzling white; the sky a dark, moody gray, matching the snow-free peaks. At that moment, rays of sunlight cut through the clouds and illuminated the top of the glacier. I forgot about the lack of oxygen, the tough walk, the strange landscape. I was simply mesmerized.

It was too cold to hang around for long, so after we’d gone as close to the glacier as we could and taken in the view all around us, we began the long walk back to the coach. Luckily, this time, every step became easier as we descended down the mountainside. It’s amazing at that altitude how every foot makes a difference and soon we were breathing easily again.

We still had one treat left in store: there’s a type of plant which, besides one place in the Bolivian Andes, only grows in this specific area of Ancash. It’s called the Puya Raymondi and, considering it’s so rare, it’s pretty ubiquitous in the valleys below Pastoruri. From the scrubby, empty landscape, these strange, spiky plants appeared, taller than houses. My friend Jess, a plant-lover, was in her element. She had been fascinated by these plants by a long time. We missed them in their flowering season, but they were still impressive, like nothing I have ever seen before. 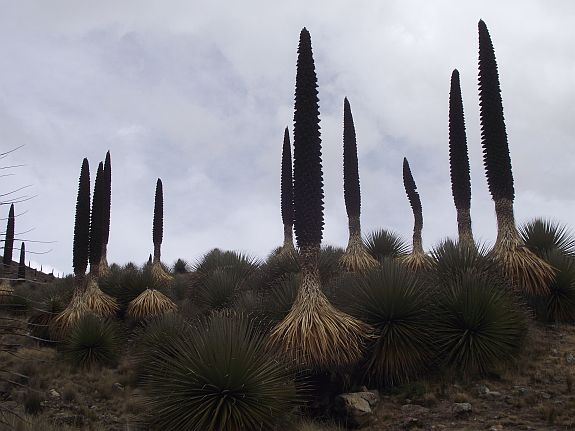 It was one of the most surreal and unforgettable days I have ever had. If you are planning a trip to Peru, I would highly recommend spending at least a few days in Ancash. It’s by no means the most obvious destination, but if you want a truly extraordinary adventure, the Cordillera Blanca will provide it.