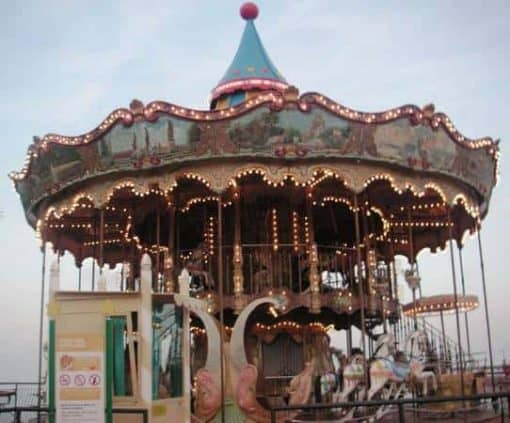 Latin scholars know that the words “tibi dabo” mean “I’ll give you,” and that the sentence means “All of this I will give to you if you fall down and worship me.”  Biblical historians tells us that Satan stood on top of a mountain and said these words to Jesus. Residents of Barcelona believe that this noteworthy event took place on top of their very own Mount Tibidabo, and that “all this” refers to the splendid panoramic view of the city of Barcelona and the aquamarine Mediterranean Sea.

Rising 1,680 feet above the city of Barcelona, Mount Tibidabo houses a selection of quintessentially Spanish cafes, along with  the Neo-Gothic Sacred Heart Church, or in Spanish, El Sagrat Cor.  The church sits incongruously adjacent to the  Tibidabo Amusement Park, the oldest amusement park in Barcelona.

El Sagrat Cor, boasts three steep terraces that seem to plunge off the mountain’s precipice. It  offers an adventure in its own right, which requires visitors to make a leap of faith, and stay calm at dizzying heights. Climb a staircase to reach the first terrace. Going higher requires paying a small fee to take the elevator. The steepest terrace sits at the top of the church.

Once one of Barcelona’s lesser-known attractions, film director Woody Allen brought the Tibidabo Amusement Park to the public’s attention by featuring it in his film titled Vicky Cristina Barcelona. Aside from a brief allusion to it in an episode of Friends,  mentions of Tibidabo rarely appear in US travel media.

While the juxtaposition between church and amusement park raises a few eyebrows, a couple of days of exposure to the whimsical architecture of Antonio Gaudi leaves visitors ready for the serendipitous and the spontaneous. Nothing seems odd after viewing the mosaic dragons of Park Guell. Such is Barcelona’s culture of the quirky.

Construction of the amusement park dates back to 1889.  In  June of 1900, work began on the creation of a tram, which transported visitors from the city of Barcelona to Tibidabo Mountain, and a funicular railway, which carried guests to the mountain’s summit, where a medley of colorful rides awaited their eager visitors. The tram, called the Blue Tram, still exists, and provides the most efficient means of getting to the mountain.

Getting There Is Half  The Fun

The old-fashioned, electric  Blue Tram, called Tramvia Blau, in Spanish, winds uphill through the streets of Barcelona,  and carries  its passengers to Mount Tibidabo. To get to the tram, take the L7 train, which leaves from Plaza de Catalunya  in the center of town. The 10-minute ride brings you to Plaza de John Kennedy. When you get off the train, the tram stop, located at 2 Avienda Tibidabo, will be directly in front of you. A one-ride metro ticket costs 1.35 euros, and a 10-ride, called a T-10, costs 7.70 euros.

As the tram makes its tight,  serpentine turns, it takes you past Barcelona’s most elegant architecture. When the tram drops you off, the ticket office for the funicular will be right in front of you, but before you ride,  savor a coffee or an espresso, along with a Spanish pastry at one of the many cafes at this lower part of the mountain.  Take in the view, then, board the funicular and enjoy the steep ride to the top. Tramvia Blau costs 3.10 euros round trip, and the funicular costs 3 euros round trip.

Quick  Tip: If you’re short on time, and want to make the make the most of your stay in Barcelona, the city’s many “hop on/hop off” bus tours bring you to 2 Aviendo Tibidabo, where you catch the Tram Blau. You purchase a ticket, which usually costs about 25 euros.  Listen to the recorded tour, and hop on or off when the description inspires  you. Almost every major hotel desk in Barcelona sells tickets for these tours.

Tibidabo Park has many rides and amusements, but take in the ambiance before trying any of them. The park’s tun-of-the-century atmosphere offers an unparalleled, Somewhere in Time experience, one which induces a strong desire for the candies apples, cotton candy and big colorful lollipops sold at the stands. Then, stroll past the antique carousel and ferris wheel, and enjoy.

Tibidabo’s rides offer your local Six Flags Great Adventure no competition in terms of thrill factor, but there is something a bit scary about a roller coaster on top of a mountain. Other attractions have an interesting history.

While Tibidabo might be just a bit out of the way, it’s definitely worth a visit.  Don’t miss it on your next trip to Barcelona.