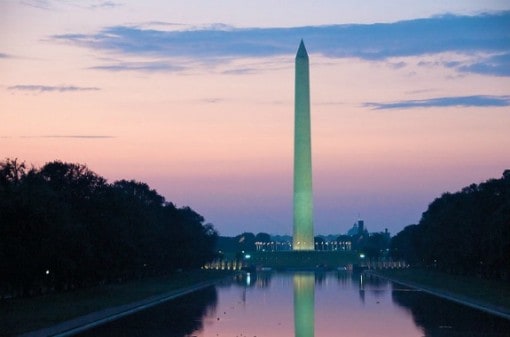 It’s 897 steps to the top of the Washington Monument, and while the record time for climbing to the top is 6 minutes and 42 seconds, it’s probably a better idea to take the elevator to the top – it only takes 70 seconds.  Or at least it will once the Washington Monument opens to the public once again.  It was closed after last summer’s earthquake because of structural damage and it has not yet be reopened.  For now, you’ll just have to appreciate it from the ground.

If you’ve seen a photo of Washington DC, you’ve probably seen the Washington Monument standing as a proud beacon above the city.  The Washington Monument is the oldest and tallest structure in the District, and on a clear day can be seen from about 40 miles away.  The interior of the monument contains 193 memorial stones paying tribute to our first president, and come from cities, states, and organizations spread across the United States.

The Washington Monument was built in honor of George Washington for the leadership shown in America’s quest for independent.  It wasn’t a smooth path from concept to completion.  The project took over 36 years, and involved a 20-year time out during the Civil War and its aftermath, before it was finally opened to the public in October, 1888.  At the time of its opening it was the tallest man-made structure in the world (555 feet), only to be eclipsed by the Eiffel Tower a year later.  Initially, the only way to get to the top for those fantastic city views was by climbing the stairs, but eventually an elevator was put in.  No surprise here – that increased the number of visitors going up to the top.

It’s located roughly in the middle of the National Mall, the Lincoln Memorial at one end and the other and the US Capitol on the other.  Along either side of the Mall are wide, unpaved walking pathways that take you from one end to the other.  After viewing the Washington Monument, take some time at one of the other attractions along the Mall.  There’s so much to see along the Mall that it’s hard to list it all, but I’m happy to recommend a few of my favorites places to stop.  They could well be stand alone destinations – you can wander forever – or just pop it for a quick look while you’re enjoying the other sites.

Until you can take the elevator to the top again, just wander around the area and appreciate the impressive simplicity of Washington DC’s first monument.  And don’t forget to get a glimpse of it at night – it’s stunning when it’s all lit up.

Hours:  The area surrounding the monument is available 24/7, and it’s pretty impressive just to wander around for a look.  It’s currently unknown when interior tours will begin again.  It’s under the authority of the National Parks Service, and you can continue