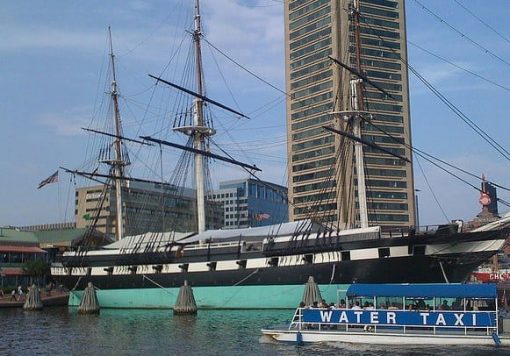 Baltimore, Maryland or “Bawl-mer”, as it is pronounced by the locals, is located approximately 40 miles from Washington, DC.  Since its founding in the 1700s, Baltimore has been a major seaport and one of the most visited areas of the city is the Inner Harbor.  Steeped in history, the Harbor offers a variety of attractions, entertainment, shopping and dining options.

While many of the Inner Harbor attractions are within walking distance of each other, my favorite mode of transportation is by water taxi.  Utilizing the Baltimore Water Taxi provides guests not only fabulous views of the Inner Harbor, but arriving at the attraction is half the fun.  Purchasing a one-day ticket  guests are entitled to unlimited rides between 13 stops.  Frequent visitors, may opt to purchase an annual pass, however, weather dependent, service may be sporadic during November through March.

The National Aquarium (Landing 1) is one of the most popular Inner Harbor attractions.  Situated in the middle of all the action, the Aquarium is a great place to start your day.  In fact, the lightest crowds are in the morning.   Divided into three pavilions, each with up to five floors of exhibit space, my favorite spot is the underwater viewing area.   Not just fish, the aquarium displays exhibits on animals of Australia, amphibians, birds, reptiles and  species of aquatic life from the coral reefs to the rain forests.

I recommend purchasing admission tickets on-line, prior to your visit, to avoid lines.  Guests visiting post Labor Day-March can take advantage of discounted tickets on Friday evenings beginning at 5 pm. 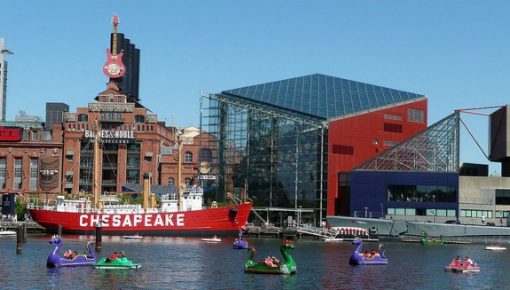 When you are ready for lunch, Harborplace offers trendy shopping and dining options (Landing 2).  Offering a mix of national chain stores to local shops, Harborplace is a great stop for souvenirs, and for visitors to get a taste of the city from food kiosks and restaurants located here.  For a quick pick-me-up, grab a couture cupcake from Ooh La La Cupcakery or sit and relax awhile at M&S Grill. Known for using fresh ingredients in their cocktails,  M&S Grill has an outdoor patio offering wonderful views of the Harbor and the USS Constellation.

One of the first ships in the United States Navy the USS Constellation is part of  the Historic Ships in Baltimore, a collection of four military vessels dating from the 19th Century until the mid 1980’s, as well as a lighthouse and museum.  After purchasing tickets, climb on board and explore the historic ships, starting at Harborplace with the USS Constellation.  The additional historic ships are located at other water taxi stops.  Just outside the Aquarium, sits Lightship Chesapeake and the compact US Submarine Torsk (Landing 1).  The US Coast Guard Cutter Taney, a survivor of the Attack on Pearl Harbor, and one of the oldest Chesapeake lighthouses still in existence, the Seven Foot Knoll Lighthouse, are located at Pier 5 (Landing 5).

Baseball fans may want to make the walk from Harborplace to Camden Yards, home of the Orioles.  It’s an easy three block walk away.

Landing 4 sits at the base of historic Federal Hill Park and the Inner Harbor Marina.  Listed on the Historic Registry for its significance as a lookout spot during the War of 1812 and the Civil War, Federal Hill indeed offers outstanding  and sweeping views of the harbor and the city of Baltimore.  Landing 4 is also known as the Rusty Scupper Landing, named for the restaurant located here, boasting Chesapeake Bay seafood like oysters and Maryland crab, as well as a live jazz, Sunday Brunch.  If you didn’t catch the view from atop the Hill, be sure to head up to the panoramic patio of the Scupper for a beverage and appetizer or two. 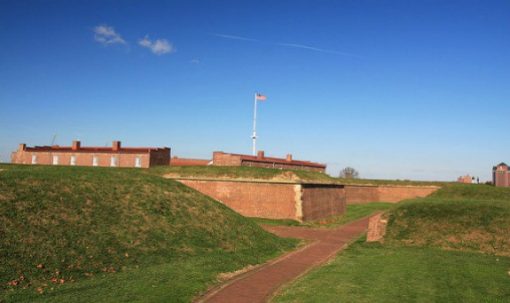 One of the most patriotic spots in the United States is Ft. McHenry (Landing 17).  It is here that Francis Scott Key witnessed the Battle of Baltimore during the War of 1812 and penned the poem and national anthem, The Star Spangled Banner. It was amazing to me that something of such significant history, was actually such a nondescript place.

Setting aside a few hours, visitors can experience a 360° view of the area from outside the walls of the Fort, stop in the Visitor’s Center and take a self-guided tour.  An admission fee is charged to enter the historic areas, including the Fort. (NOTE:  Although the National Monument is open daily, except major holidays, the Water Taxi Landing is only open April 1 – September 30.)

Chic and upscale is the best way to describe Harbor East (Landing 7).  A newly renovated residential area of Baltimore’s Inner Harbor, Harbor East offers boutique shopping and gourmet dining options.  With several hotels located here, including the newest Four Seasons Hotel Baltimore, Harbor East makes a great home base for a weekend in the city.  If you are traveling with friends, Bond Street Social offers the perfect lesson in sharing through its menu of social plates and social drinks served in an 80 oz. infusion jar.  Then again, after indulging in one of the 80 oz. social beverages, I doubt anyone will be a stranger for long. 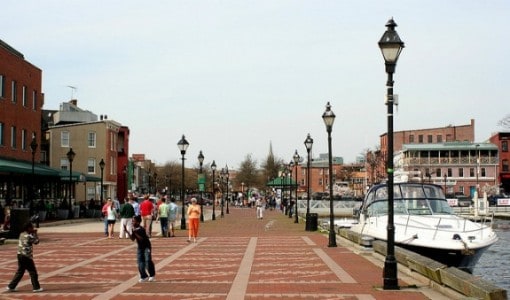 If you love the nightlife, try heading to quaint Fell’s Point, known to have more pubs per square mile than anywhere else in the United States.  Water Taxi Landing 11 is the stop for Fell’s Point. The bustling, bar-hopping neighborhood by night is also the home to eclectic, one-of-a-kind shops and historical points of interest dating from the 1726 founding as a maritime village.  I love walking down the streets lined with brick buildings.  It’s such a great place to hang out that visitors from prior lifetimes are said to still haunt Fell’s Point, including the ghost of Edgar Allan Poe.

3 thoughts on “Baltimore By Water Taxi: An Inner Harbor Experience”