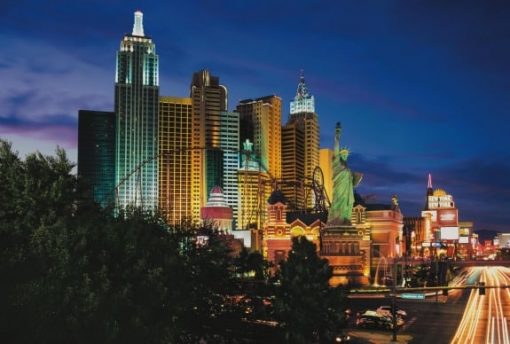 Never had I imagined that a business trip to Las Vegas would inspire me to fall in love with the streets of New York City but that’s exactly what happened as I toured New York-New York on Las Vegas Boulevard South during a recent visit.

Externally, New York-New York features an innovative re-creation of the Manhattan skyline, including 12 New York-style skyscrapers which are approximately one-third the size of actual New York City architecture.  The 12 individual resort towers (top height of 529 feet) architecturally mimic some of the most famous New York City skyscrapers including:

The property itself, which has 2,024 guest rooms, also boasts a 300-foot-long, 50-foot-high replica of the Brooklyn Bridge and a 150-foot replica of the Statue of Liberty.

However, I was particularly enthused with what I discovered while inside New York-New York. 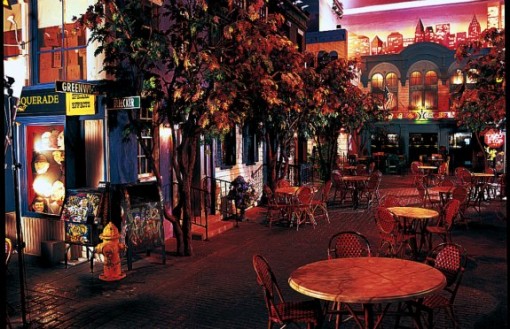 Throughout the resort there are numerous design elements used to reflect the history and culture of well-known New York places like Manhattan’s Park Avenue, Broadway and Times Square.  If you enter near the Zumanity Theatre,  you’ll find yourself standing at the edge of a “neighborhood” that immediately reminded me of Greenwich Village.

From cobblestone  walkways and street-corner vendors to store fronts partially protected by overhead awnings, I marveled over the east coast-flavored decor that nearly succeeded in making me forget I was within a few hundred yards of the famed Las Vegas Strip.

Street-side dining options are plentiful in this area and guests will undoubtedly notice periodically-placed parking meters, fire hydrants and even pay phones.  Aside from many small shops and eateries that are actually open for business, there are sections of “the village,” created for visual appeal only. Along these building fronts, visitors will notice things like second-floor window air-conditioning units, fire escapes and mock apartment building entrances.

While standing at the corner of West and Broadway, I spotted Starbucks, Greenberg’s Deli and Gonzalez y Gonzalez, a New York Mexican cafe complete with lanterns, pinatas and even a tequila bar.  Incidentally, the dinner fajitas at Gonzalez y Gonzalez are very good.

A few steps down the block, where Broadway and Greenwich Street meet near the Gonzalez y Gonzalez outdoor dining garden, a dimly-lit New York Jets football helmet lamp is clearly visible through a second-story window. 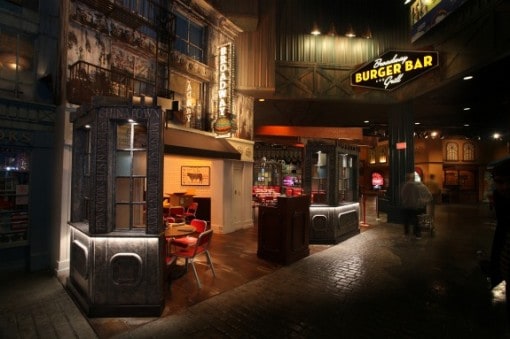 Whether visitors are looking for a burger and fries, a deli sandwich and soup or a slice of New York-style pizza, there’s something for just about everyone in the Village Eateries area.  Other dining options inside New York-New York include The Sporting House Bar and Grill, Nine Fine Irishmen, Gallagher’s Steakhouse and Chin Chin Cafe.

Beyond the village area, on the resort’s second floor, is a 12,000-square-foot entertainment center known as the Coney Island Emporium.  This features midway-style carnival games along with more than 150 coin-operated video games. You’ll also queue up here for The Roller Coaster at New York-New York.

The resort also has an 84,000-square-foot casino as well as a variety of nightclubs, lounges and bars .  But if you’re looking for nothing more than an east-coast experience while visiting out west, a self-guided walking tour through the streets of New York-New York is certainly worth your time.

The New York-New York Hotel and Casino is located at the intersection of Las Vegas Boulevard & Tropicana.