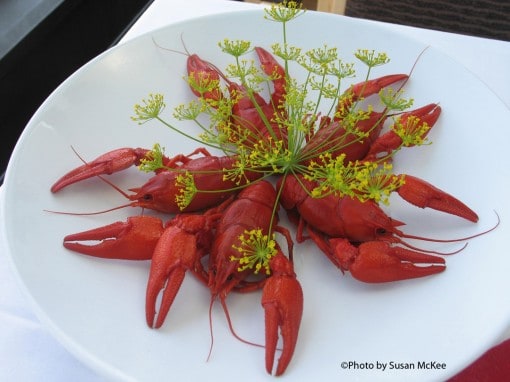 Traveling to another country is a chance to try a different cuisine. Sure, Starbucks, McDonald’s and KFC are almost everywhere around the globe, but where’s the fun in scarfing down a Big Mac in Turku when you can snack on a freshly baked karjalanpiirakka? Why settle for a Häagen-Dazs dessert in Helsinki when cloudberries are in season? And, why not schedule your travel to Finland to enjoy a local foodie festival?

Rapujuhlat! For those of you who don’t speak Finnish (almost every one of you, eh?), that means Crawfish Party! Those wacky Nordics celebrate the tiny but tasty crustacean every August and September — a great time to visit this northernmost European country.

It may be hard to believe that crawfish are considered a delicacy in Europe. Here in the United States, mudbugs are a default meal for rural residents of limited means. “Gonna catch me a few crawdads for supper” is a familiar ritual everywhere from the bayous of Louisiana to the backwoods of Indiana. (Something so readily available is called a variety of names — crayfish, crawfish, crawdad and mudbugs all refer to the same freshwater crustacean.)

On my most recent visit to Finland, it was the height of crawfish season, and I finally mastered the technique of extracting nutrition from the tiny critters that resemble lobsters, but are much, much smaller.

My first crawfish meal was in the sedate Savoy Restaurant atop one of Helsinki’s tallest buildings. Of course, in Helsinki, that means the terrace looks out over the Esplanadi Park from lofty heights of the eighth floor.

Three Finnish icons drew me to the Savoy (which has been serving meals for a mere 75 years): crawfish, cloudberries and the Aaltos.

The dining hall of the restaurant is part of Finnish design history. It was created in the late 1930s by Aino and Alvar Aalto in cooperation with textile artist Dora Jung and the then newly established Artek. Its pure and austere minimalism has remained in vogue for decades — and I had to see it for myself (it’s true). 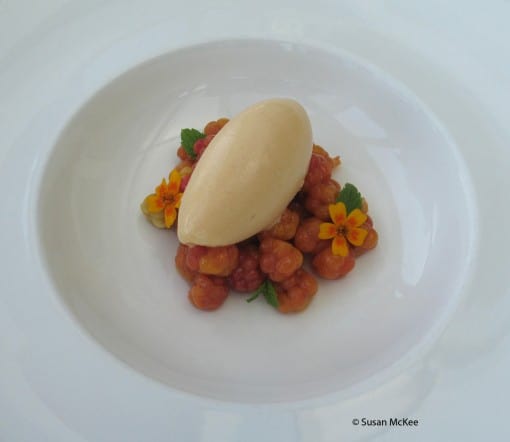 Cloudberries grow wild in the Nordic countries (they look like a small golden-yellow raspberry). When I made my dinner reservation, I’d asked if cloudberries were on the menu. When the manager, Janne Marin, couldn’t find any in the market, he sent his aunt into the forests of northern Finland to pick some; she drove the 10 hours to deliver them to Helsinki in time for my dessert. (Such service is hard to imagine anywhere else in the world.)

But first came the crawfish. Elegantly arranged on the plate, of course. Mr. Marin sat down across from me to give me a lesson in extracting the edible parts — deftly taking apart the crustacean and pointing out that (just like the lobster) the best bits were in the tail and the claw.

Once all the meat is extracted, it’s piled on a thin piece of toast, garnished with dill and devoured.

Mr. Marin suggested a Sancerre as the perfect wine to accompany the seasonal delicacy. And the cloudberries? They were served up as a sorbet surrounded by sugared berries and mint leaves.

My second crawfish experience took place in a more raucous setting in Mariehamn in the Åland Islands, off the southwestern tip of Finland. Since Rapujuhlat really is just an excuse to get together with friends and celebrate the end of summer, the restaurant was packed. All the special accoutrements were in place, from the crawfish-themed placemats to the crawfish-themed party hats. 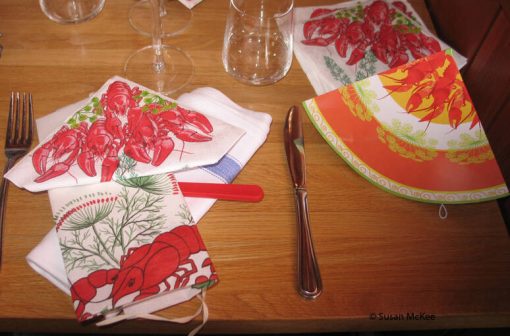 There’s a whole album of crawfish party songs, but (Finnish not being my native language) I could only listen to the singing going on around me. And, since the beverage of choice tended more toward vodka than fine French wine, the volume increased as the evening progressed.

Still, a marvelous time was had by all, and the huge pile of empty crayfish carapaces was swept into the bin as we left.

I also saw cloudberries for sale in various farmers’ markets both in Helsinki and on the Åland Islands. When I did, I bought a small basket to snack on. 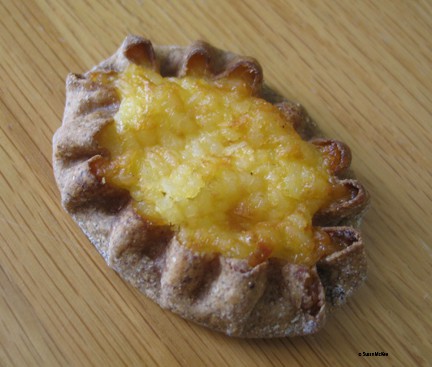 Another snack available almost everywhere in Finland is the karjalanpiirakka. This pastry (from the Karelian region) has a thin rye crust with a filling of rice and butter mixed with boiled egg. It’s easy finger food, sold all over the country.

A Finnish foodie fest that takes place in the early autumn celebrates the Baltic herring — an annual fair that dates back to the mid-1700s. In the United States, we tend to see herring only pickled in jars. When I was in Turku one October, the herring festival showed me the many, many ways that the Finns enjoy the fish, including with a tomato-y sauce (similar to catsup), in a tangy mustard sauce, mixed with lots of chopped garlic, in a lemony yogurt, marinated in lime and coconut milk — even flavored with curry.

Then, of course, there’s reindeer. In North America, venison is the “wild game” delicacy of choice, but in the Scandinavian countries, look for dishes made with reindeer. It is a rather tough meat, and long, slow cooking brings out the best flavor.

NOTE:  The author has visited Finland many times.  On occasion, some of the travel was hosted by Helsinki tourism, Åland Islands tourism, and Finland tourism; the opinions expressed here are her own.