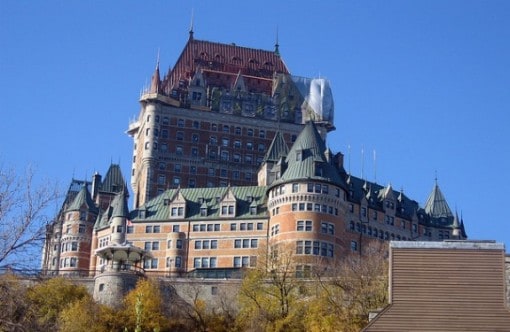 Located along the Saint Lawrence River, Quebec City is one of the oldest cities in North America.  The city was founded by Samuel de Champlain in 1608, and given an Algonquin name meaning “where the river narrows.”  Quebec City was originally a walled city and it remaining ramparts, giving it some of its historical charm, led to the designation of the Historic District of Old Quebec as a UNESCO World Heritage Site.

Why should you put Quebec City, often called the “Paris of North America,” on your getaway list?  Here are just a few of the wonderful experiences awaiting you there. Sure, all the standard hotel chains are found here, but I’d recommend a stay at the Chateau Frontenac (a Fairmont property, in photo at top).  The Cheateau Frontenac sits atop the Cap-Diamant, overlooking the Saint Lawrence River, and offers old world elegance and charm right in the heart of Old Quebec – the area best known for its historic charm.  It’s tempting to relax in the hotel all day, and I’d recommend spending some time enjoying it, but you’re well located to explore the city (it’s a very walkable city).  So get ready to head out – the lower town is waiting to be explored, there are museums, historic, and cultural sites nearby, and there are culinary delights waiting to be sampled.

Special note for travelers with pets, the Chateau Frontenac is dog friendly.  They even have their own Canine Ambassador – Santol.  ABernese Mountain dog, originally trained to be a guide dog, Santol proved to be so lovable and social that the Miro Association used him for a variety of promotional appearance.  When he retired from Miro, Santol took up home in the lobby of the Cheateau Frontenac where he greets everyone and gets plenty of love from both staff and guests.  I asked where he went at night and was assured that he went home with a loving staff member.  Spending some time in the lobby and watching people interact with Santol is a lot of fun, and it’s hard not to smile as you see how he brings laughter to so many people.  And he gets his fair share of loving right back.

From the minute I first saw its castle-like architecture and round turrets until the time I had to leave, I felt like a princess in my very own castle.  Not much can top that.

Quebec is a city of neighborhood.  You’ll likely be staying in or near Vieux Quebec (Old Quebec) or the modern downtown core, but don’t forget to get to some of the other neighborhoods to enjoy the special local charm they offer. Old Quebec, a UNESCO World Heritage Site, is made up of the Upper Town and the Lower Town.  You’ll notice a definite European feel here as you stroll down the winding streets for a little shopping, stop off at a café for lunch or something to drink, or find a restaurant for a fine dining experience.  The area is full of historic spots with some dating back a few centuries.  With high fashion in the boutique windows, delicious pastries, chocolates, and other goodies around every corner, and the French language surrounding me, it almost felt like I was in Paris.  You can reach the Lower Town from the Chateau Frontenac by a short walk, and then down some steps, or take the Funicular which connects the two areas. Special note:  As with all old cities, Quebec has a wonderfully rich haunted history.  If this is your thing – or perhaps, just because it’s Halloween time – a ghost tour may give you a different perspective on the city.

What & Where to Eat

If you think Paris has great food, don’t worry, Quebec City won’t disappoint you.  It’s full of both traditional and nouveau French cuisine, of course, but it’s also making a name for itself by carving out some serious foodie territory. For something a little different: Jean Lesage International Airport (YQB) is located about seven miles southwest of the city.  It’s about a 15 minute drive into the city, and is also serviced by public transportation (RTC bus #78).  From the United States, service is available from (or through) Detroit, Newark, Washington Dulles, Chicago, Philadelphia, and Fort Lauderdale.  It is also easily reached through all of the major Canadian cities.

NOTE:  The author’s visit to Quebec was sponsored by the Quebec Tourism Office and its partners; the opinions expressed are her own.