For a getaway to enjoy magnificent museums, significant art influences, and momentous history, head to the lone star state of  Texas.  Whether in the heart of one of Texas’ dynamic cities or in a quaint, authentic country or coastal town, travelers will be able to visit world-class exhibits, explore the soul of Texas and observe the footprint of history wherever their trip takes them.

The Dallas Arts District is the largest urban cultural district in the country and is home to a collection of innovative and significant architectural sites covering 10 acres.  The district is home to The Dallas Museum of Art, known as one of the nation’s leading art institutes and for its impressive collection of more than 24,000 works of art; the Nasher Sculpture Center, devoted to the exhibition and study of modern sculpture; and the Crow Collection of Asian Art. It is also home to the AT&T Performing Arts Center.

Thirty minutes away, Fort Worth’s Cultural District is considered the Museum Capital of the Southwest and is home to five museums. The Amon Carter Museum of American Art houses a preeminent collection of nineteenth and twentieth-century works of art in addition to being one of the nation’s major repositories of American photography. The Kimbell Museum of Art, regarded as one of the most outstanding architectural achievements of the modern era, is internationally known for its range of collections. Nearby is the Modern Art Museum of Fort Worth, the National Cowgirl Museum and Hall of Fame, and the Fort Worth Museum of Science and History.

Just south of Fort Worth, the Texas Rangers, the oldest law enforcement agency in North America, are honored at the Texas Ranger Museum and Hall of Fame in Waco. Nearby, the Dr. Pepper Museum educates visitors on the history of the soft drink native to Texas. Located close by on Baylor University’s campus, the Mayborn Museum features a natural science and cultural history museum focusing on Central Texas with walk-in dioramas.

For more suggestions of things to do in Dallas, click here.

Houston’s Museum District houses 17 institutions including the Children’s Museum of Houston, The Holocaust Museum, and the Houston Museum of Fine Arts (one of the largest art museums in the country, housing over 63,000 impressive works of art).

Close by, the Menil Collection is considered to be one of the most important private art collections in the world. Situated in an acclaimed Renzi Piano structure, approximately 17,000 paintings, sculptures, prints, drawings, and photographs are part of this prized collection.

Just east of Houston, Beaumont is home to the extensive Texas Energy Museum, the Edison Museum and the Fire Museum of Texas.

And in Corpus Christi, you’ll find the Museum of Science and History, the Art Museum of South Texas and the World War II-era aircraft carrier, the USS Lexington.

In San Antonio, the Museo Alameda showcases Latino art, history, and culture, via a partnership with The Smithsonian Institution.

The Alamo, one of the state’s most recognized buildings and the center of Texas’ fight for independence from Mexico (in top photo), offers a glimpse into the lives of San Antonio’s early settlers, as do the city’s other nearby 18th Century Spanish missions – Mission San Jose, Mission Concepcion, Mission San Juan, and Mission Espada.

The Witte Museum is San Antonio’s premier museum of South Texas history, culture, and natural science.  The San Antonio Museum of Art exhibits collections of Latin American and Asian art, as well as folk and contemporary pieces.  And the McNay Art Museum opened in 1945 as the region’s first museum of art, featuring everything from Diego Rivera and Pablo Picasso works to manuscripts and sculpture gardens.

If you’re traveling to San Antonio with kids, there are kid-friendly museums and lots of free things to help stretch the budget. 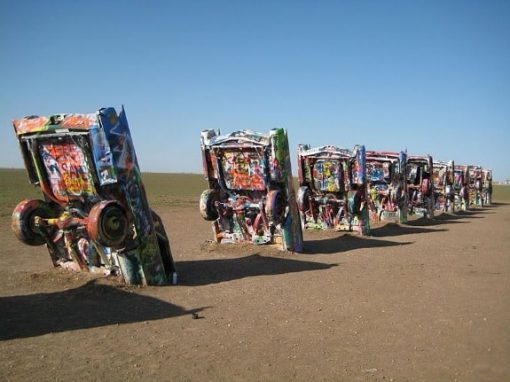 In Amarillo, the recently-renovated American Quarter Horse Hall of Fame and Museum features one of America’s most famous native horse breeds, as well as the famed and quirky Cadillac Ranch – a public art installation showcasing ten classic Cadillacs buried nose down at the same angle as Cheops Pyramid in Egypt.

The Buddy Holly Center in Lubbock houses a permanent exhibition dedicated to the life and music of Buddy Holly. The Center also houses the Texas Musicians Hall of Fame and the Lubbock Fine Arts Gallery.

In Abilene, Frontier Texas! allows visitors to experience the big picture of the Texas frontier between 1780 to 1880. The original Shackelford County Old Jail Art Center is worth touring as well. Built in the late 1800′s, the walls are adorned with extensive permanent collections from American and European twentieth-century works, outdoor twentieth century sculpture art, Asian tomb figures dating back to the early Han and Tang Dynasty’s, in addition to a collection of pre-Columbian art.

In Midland, the American Airpower Heritage Museum, located along with the Commemorative Air Force Headquarters at Midland International Airport, is recognized for its collection of authentic World War II artifacts, memorabilia and the world’s largest collection of original aviation “nose art.”

Created in 1936, the El Paso Centennial Museum was the city’s first museum and one of the earliest buildings at the College of Mines, now the University of Texas at El Paso. Permanent exhibits focus on the Chihuahuan Desert region, the largest desert in North America.  Another stop should be the El Paso Museum of Art with a permanent collection of over 5,000 works of art.

Located in the heart of the Big Bend region, Marfa has a rapidly-growing and internationally popular arts community which houses the Chinati Arts Foundation, founded by famous minimalist artist Donald Judd.

In Austin, the Blanton Museum of Art is recognized as one of the country’s top university fine arts collections.  Located on the University of Texas campus, the Blanton boasts a notable permanent collection of more than 17,000 works and is recognized for its Old Master paintings, modern and contemporary American and Latin American art, and an encyclopedic collection of prints and drawings.  Nearby you’ll find the Bob Bullock Texas State History Museum.

The American West also lives on at the Kerrville Museum of Western Art showcasing Western art and artists, past and present.

The National Museum of the Pacific War in Fredericksburg is dedicated to preserving the history of the war while honoring and remembering those who were lost.