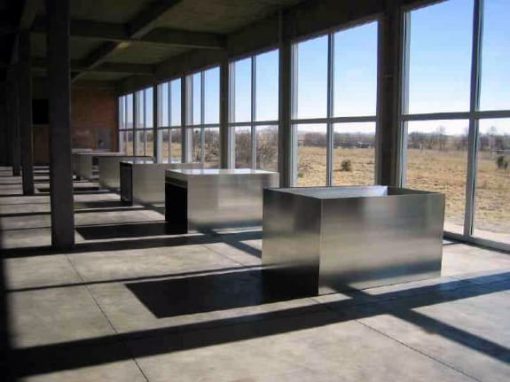 If folks outside of Texas have heard of Marfa the first thing they’ve likely heard about are the infamous “Marfa Lights.”  The second thing, an art community that rivals most big cities in the United States.  The town has also been featured in a number of movies over the years beginning with a visit by Rock Hudson, James Dean and Elizabeth Taylor filming the movie “Giant.”  For such a small little blip in the middle of Texas, Marfa has over the years, taken on a personality that must be experienced first-hand to appreciate.

Where Marfa Came From

Located in what is known as the Big Bend area of Texas, Marfa is a small town (just 2,424 residents) with a big attitude sitting on the highland plain of the Chihuahuan Desert between three mountain ranges at an altitude of almost 5,000 feet. It was in 1883 that the wife of the then president of the Texas and New Orleans Railroad named the tiny railroad water stop. “Marfa” means “Martha” in Russian and she named the town after a character in the Russian novel  “The Brothers Karamazov” that she was reading at the time.  Marfa, an unusual town from the beginning, has grown from those early roots.

The Art Scene is the Thing

It’s Texas big sky country, but the art scene is even bigger in Marfa.  Donald Judd, a minimalist artist from New York City, had a hand in putting Marfa on the map in the art world.  With a Stalwart insistence that where his work was installed was just as serious a business as the work itself, Judd found Marfa’s open and native landscape, as well as its rural agricultural, feel the perfect place for his work.

Following his death in 1994 two nonprofit arts organizations were founded.  The Chinati Foundation includes Judds’ work along with that of his colleagues at Fort Russell.  The foundation has 10 buildings and the permanent work on display (see top photo), and includes pieces by Carl Andre, Ingolfur Amarson, John Chamberlain, Dan Flavin, Roni Horn, Ilya Kabakov, Richard Long, Coosje van Bruggen, John Wesley, Clas Oldenburg and David Rabinowitch.  The Judd Foundation has also been set up to preserve the property where Judd lived and worked.

Cultural centers like Ballroom Marfa, a non-profit foundation dedicated to contemporary art and culture, attracts traveling art exhibits from around the country.  The ballroom also hosts film exhibits.  Other nonprofit foundations related to art have also been founded in the town including The Lannan Foundation for literature, the Goode-Crowley Theatre and The International Women’s Foundation.

There are also eight high-end art galleries in Marfa celebrating works of art from artists around the world. One main draw for many art lovers visiting the Marfa area is the Prada Marfa installation.  Created by artists Elmgreen and Dragset, the installation is located about one mile northwest of Valentine, Texas, off of Route 90 just 37 miles outside of Marfa proper.  Installed on October 1, 2005, the artists referred to their installation as a “pop architectural land art project.”  The installation looks like a Prada store and is made of adobe bricks, plaster, paint and glass with an aluminum frame. A highlight of the piece are two windows that showcase Prada shoes and handbags that were handpicked by Miuccia Prada.

Even for visitors going to Marfa for the art scene, the mysterious Marfa Lights provide a serious draw.

It is known that the Native Americans in the Marfa area knew about these mystery lights long before the first recorded sighting in 1883.  However, it was in that year that the lights were first documented by a rancher named Robert Ellison who coined the lights Marfa’s “Mystery Ghost Lights.”

Theories abound as to source of the lights – ideas that the lights are created by swamp gas, phosphorescent mineral displays, ball lightning, UFO’s, secret chemicals left by the US Army and spirits of Apache ancestors are all still discussed  No matter what causes the Marfa Lights,  the lights stimulate the imagination for anyone who sees the mystery.

The best time to view the Marfa Lights are after sunset on clear nights.  There is a Marfa Lights Viewing Area located on Highway 90 just east of town, but viewing is good anywhere between Marfa and the Paisano Pass facing southwest toward the Chinati Mountains.

What Else You Need to Know

Marfa is also a popular spot for movie buffs.

The now restored pueblo-deco style Hotel Paisano’s lobby was featured prominently in the 1955 movie Giant starring Elizabeth Taylor, Rock Hudson and James Dean.  Inside the lobby there are photos from the making of the Academy-award winning film.  You can still visit James Dean’s hotel room at Hotel Paisano and there is a viewing room off the lobby where guests can watch the movie, which runs every day all day. There are kiosks and wall hangings with memorabilia from the set and of course, plenty of related souvenirs.

The Coen Brothers also filmed their Academy Award winning No Country for Old Men in Marfa and that same year, Paul Thomas Anderson’s There Will Be Blood featured Marfa locations as well.

These days, in keeping with the film buzz Marfa has generated lately, the town holds an annual film festival in May.  The perfect setting, Ballroom Marfa is working on a drive-in movie theater for the festival to be designed by the architect of New York’s Museum of Modern Art.

Marfa is located just north of Big Bend National Park off of Highway 90 and 67.  While some travelers might pass the little town and not even realize what they’re missing, those who take the time to slow down and savor the history and complexities of the mysterious lights and the stellar art scene, will make Marfa a destination to return to again and again.

3 thoughts on “Marfa, Texas: Little Town With a Big Attitude”