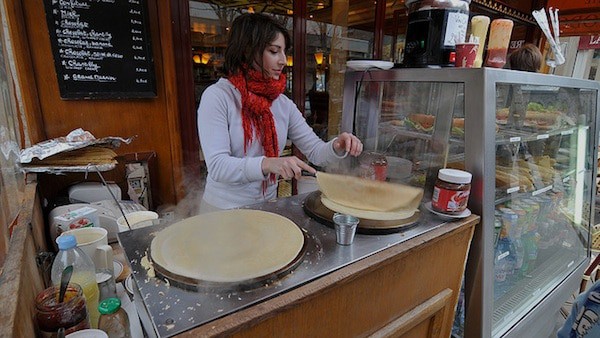 Shrove Tuesday was a much looked forward to annual event in our house. Dad would make the pancake mix and get the pan greased and ready, then we’d all have a go at making our own. It was messy and great fun. And when we were done we’d squeeze on some lemon juice, add a sprinkling of sugar, before tucking into our feast.

Pancakes were the best. That is, until I went to Paris and tried my very first crêpe. They were so thin and light! And the range of toppings… how do you choose? All of a sudden, pancakes seemed more like the distant second cousin, and it was the crêpe I craved with its thin and crispy texture.

Why is France famous for the humble crêpe?

Well it’s one particular area of France that holds the claim to fame. Why? It’s where the crêpe is thought to originate from. But there’s more to it than first meets the eye.

There are, in fact, two types of crêpe. The first, known as Galettes and made from buckwheat, come from an area called Haute-Bretagne in the northern part of Brittany. The second, going under the more familiar name of crêpe and made from wheat, come from Basse-Bretagne in southern Brittany. What’s the difference between a Galette and a crêpe? A Galette has a thicker, more meaty texture, and was traditionally stuffed with cheese, meats, and other savory produce. The crêpe, in contrast, has that special sweet thinness that’s become world famous today.

As to the different toppings you can choose from in a modern day crêperie, well the list has become just about endless. Still, even the original toppings have their own story to tell.

How the famous Crêpe Suzette was born

The Crêpe Suzette is, according to one story, the result of a lucky accident in the kitchen by a young man called Henri Carpentier back in 1895. He was the assistant waiter at the Monte Carlo Cafe in Paris and had been charged with serving the future king of England, King Edward VII, who was eagerly awaiting his specially prepared pancake.

Unfortunately, the said young man accidentally set fire to the spirits that were poured on the crêpe, potentially a disaster for his pancake making career. He was a quick thinker, however, and tasted the result to see just what kind of dish his accident had created. The rest is history. The Crêpe Suzette was born with that first tasting of the burned off spirits, and today it’s a firm fixture on any decent crêperie’s menu.

What’s on your typical crêperie menu?

These days the humble crêpe comes in a gazillion different flavors. Grab a menu and you’ll see all the traditional favorites such as lemon with a sprinkling of sugar. But you’ll also see many other choices like strawberry shortcake, nutella and marshmallows, or toffee sauce and banana for those with a sweet tooth.

If it’s something savory you’re after, menus include the traditional cheese and ham, or ham and tomato. But you’ll also see vegetarian options, spicy options, and just about any combination that might appeal to a hungry passerby. But first…

How exactly do you eat a crêpe? Is there an etiquette?

I mean you’re in Paris. City of elegance and all things sophisticated. It’s not like being at home and picking up your pancake with your fingers. Or is it?

Well, if you’re in a fancy restaurant, there’s no need to worry. Your crêpe will be presented on a plate with the customary knife and fork, so it’s easy to eat it without making a mess. But if you try one of the popular street stalls that are all around the city, you’ll usually be served your crêpe wrapped in a paper type napkin, with not a knife or fork in sight. What to do? In this case it’s fingers all the way. The napkin keeps everything nicely held together for you. Just fold down the paper as you eat.

So where’s best to pick up a crêpe when you’re in Paris?

There are crêperies on just about every street corner in Paris so they’re not hard to find. Still, it’s those street stall crêpes that get me every time. It’s great being able to watch the whole food preparation process and how quickly all the individual ingredients are turned into the finished article. Now all you need to do is find a street stall you like the look of, choose your flavor from the menu, then sit down on the sidewalk and watch the world go by as you tuck in to your freshly prepared food. And if you want some recommendations on where to go, this little guide is a great resource for anyone visiting Paris.

Now all that’s left to say is, “Bon appetit!”

Honor has lived in Japan for 10 years and traveled extensively in Asia, South America and Europe, as well as some areas in the USA. Her favorite reasons for travel are to get a peek inside a culture through visits to local events and festivals, and learning more about the history and people of a place. Then there’s always food. Of course! And the journey itself is just as important a part of her adventures. Honor’s top three travel destinations are Japan, Uruguay, and Jordan.