Wilderness? Only 10% of the land area is remote – more than 48 hours from a large city

A recent study by the Global Enrironment Monitoring unit of the European Commission has produced a very interesting visualization of how accessible areas around the world are. Representing in brighter yellow colours those areas that are just a few hours away from a major city and darker red colours those that can only be reached after days of travelling, the map clearly conveys the simple fact that there are very few regions in the world that are truly isolated. 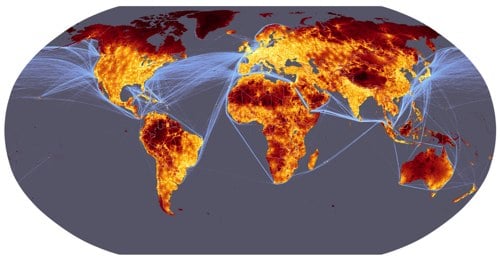 How far away would you be willing to travel? Most tourists will assume a half-day for their journeys, a couple of hours getting to the airport and waiting for a flight, four to eight hours on a plane and maybe another hour getting to the final destination. The end point will usually be another major city or tourist destination with decent road infrastructure.

But knowing that there are very few places in the world that are more than a couple of days away from “civilization” you could easily add another day to your journey to venture into a less accessible location, leaving behind most tourist traps and blending with the local scene. All this without risking too much as you would still be “near” a major city. All of the sudden the possibilities are endless.

The journey may end up costing more because you need to make arrangements for a car or a driver, but it is likely that settling in a remote community away from the tourist buzz will also drive your accommodation costs. Of course it now makes sense to stay longer. In fact, it makes sense to travel not only for vacations but the reconnect with your creative self, that part of your mind that needs to slow down and retreat in a quiet place to invent and define your next few months of greatness.