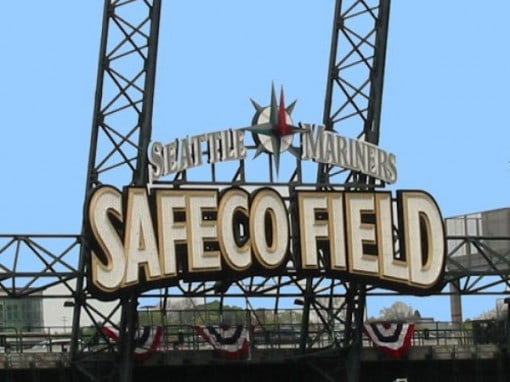 Seattle is a big sports town offering professional baseball, football, basketball, hockey, soccer, and horse racing.  Whether you’re a die hard team fanatic, a casual fan, or just want a taste of what the locals get all excited about, here’s your Seattle professional sports guide:

Safeco Field, home to the Seattle Mariners of the American League, is one of the nicest sports facility in the country.  With a retractable roof for those days when the Seattle rain gets the best of us. It takes about 15 minutes or so to close the roof, so your rain pain won’t last too long even if it starts up in the first inning.  I’s been a tough couple of Mariner seasons, but the “Safe” is also worth a visit in the off-season when tours of the Safeco Field are offered.

AAA baseball finds its home a little to the south where the Tacoma Rainiers, the Mariners’ Triple-A team, calls Cheney Stadium home.  Rainier games are popular with families and give fans a chance to get a view of the game from close to the field.

Class A baseball will have you heading north where’re you’ll find the Everett AquaSox playing at Everett Memorial Stadium.  Tickets are dirt cheap, the games are family friendly, and there’s not much better than baseball like this.

The sport of kings take to the dirt at Emerald Downs in Auburn.  Admission fees are modest and a $2 bet gives you personal involvement in the race.  The stereotypes are true, it’s thundering hooves, loud cheering down the homestretch and happy faces in the winner’s circle.

The Seattle Sounders play at Qwest Field in a season that runs May through September.  I’m a new fan of the sport, having gotten caught up in the excitement of the World Cup last summer, but now understand the enthusiasm shown for our major league team.  We still call it soccer, rather than futbol, but the appreciation for the sport is growing.

It might be easy to forget Seattle basketball after the departure of our men’s team, but the WNBA’s Seattle Storm offers championship play that will excite and enthuse lovers of the game.  The Storm play at Key Arena on the Seattle Center campus.

From the heat of pre-season games to the rain of the winter ones, Qwest Field is the home field of the Seattle Seahawks.  Fortunately, around 70% of the seats are covered so you won’t get too much weather abuse without losing that outdoor feel of the game.  You’ll also get a great look at the Seattle skyline, and area views that sweep from Mt Rainier to the Olympics.

The Class A Seattle Thunderbirds hit the ice in a season running from September through March.  They’re young and scrappy, with a loyal fan base, and provide a great introduction to the sport of hockey.  The T-birds play at ShoWare Center in Kent.