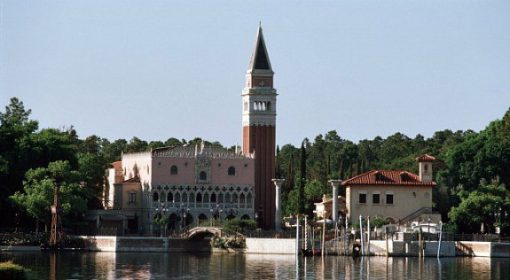 Ah, Italy! Floating through Venice,  drinking in life in Tuscany and touring Rome, a true dream vacation for me.  Alas, I awake from the dream and realize that time and money being what it is, it is a dream that must be put on hold for now.  Still there is a destination where, for the day, visitors can experience a few of the sights, sounds and tastes of Italy without a passport – the Italy Pavilion at Disney’s Epcot.

Epcot is one of the four theme parks that comprise Walt Disney World Resort.  Divided into two sections, Future World and World Showcase, visitors can relish the newest technologies or explore 11 countries and cultures of the world.  For me, a day at Epcot begins early, in order to experience many of the most popular attractions in Future World before the crowds build.  With these attractions checked off my list, I head to the World Showcase in time for its slightly later opening hours.

The Showcase of countries is laid out in a circular pattern making it easy to travel the globe.  Passing  through the pavilions of Mexico, Norway, China and Germany, the next stop is my dream destination, Italy.  While some of the pavilions in the World Showcase feature a ride-style attraction to give visitors a glimpse of the country and culture, Italy does not.  Instead it is the architecture and ambiance of Italy that is the attraction.

The gondolas tied to the dock in the lagoon is the first indication of your arrival in Italy.  Absent the canals, the smaller version of the Campanile, the famed bell tower of  St. Mark’s square, will spark the imagination and romance of a visit to Venice.  Be sure to look for the angel atop the tower, covered in gold leaf, it’s an often overlooked feature. 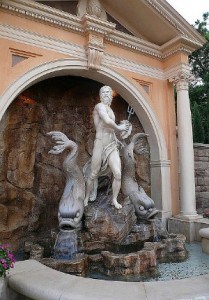 Other replicas of include the pink and white Doge’s Palace, seen at the entrance of the pavilion, and the Fontana de Nettuno, a nod to Bernini’s Neptune fountain, found at the Plaza del Teatro.  Scattered throughout,  other detailed sculptures add to the Italian charm.

Part of the focus of the World Showcase is providing an opportunity to understand the culture of a destination through its food.  In the Italy Pavilion you can enjoy Italian chocolates, gelato, pastries and wines available to purchase from several street carts or the shop, Delize Italiane.  As you stop to rest and enjoy the entertainment, try a Bellini, my personal favorite, or Italian Margarita made with Limocello and Grappa.

Tutto Italia Restaurant serves traditional hearty pastas, appetizers and desserts.  Much like most of the restaurants around Walt Disney World, the lunch menu offers many of the items featured on the dinner menu, yet at a reduced price.  (NOTE: Tutto Italia is currently undergoing renovations and will be closed until late April, 2012.)  Trust me, it will be worth the wait to indulge in the famous cinnamon ricotta cheesecake with grappa soaked raisins or a caffeine packed espresso coffee martini!

The open kitchens and massive stone ovens of Via Napoli provide not only entertainment but deliver pizza replicating the type served by the street vendors of Naples.  Opened with much fanfare in 2010, great care is taken to use authentic ingredients, Caputo flour imported from Naples, San Marzano tomatoes, handmade mozzarella, even well water identical to that found in Naples.

The stone ovens are named for the three active volcanoes of the area, Mount Etna, Mount Vesuvius, and the volcanic island, Stromboli.  Each oven depicts the face and giant gaping mouth of the god, whose mythology surrounds the named volcano.  Not only pizza, but baked pastas emerge from the wall of three massive ovens. In contrast to the massiveness of the ovens, I found the restaurant to be open and airy with decor in deep shades of gold and burgundy, 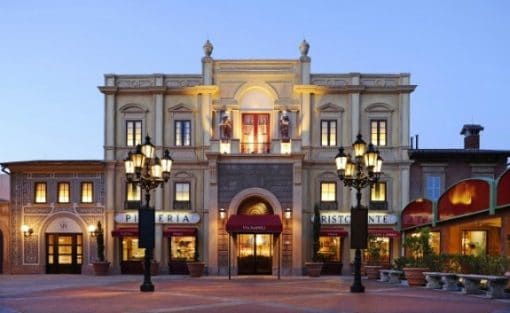 If you want to savor the flavor once you return home, numerous cookbooks, including the tastes of Naples, Rome, Tuscany and the style of Italian Farmhouse, as well as other kitchen items are available for purchase from the store, La Cucina Italiana.  Additional shopping, much more high end than you would expect at a theme park, includes fine Florentine soaps, Illy espresso coffee and Murano glassware.  My favorite stop is Il Bel Cristallo with its amazing collection of Venetian glass jewelry, Pulicati leather purses, Ferrari merchandise, and the heavenly scents of Italian perfumes.

Don’t overlook the landscape of the gardens or you might miss the olive and kumquat trees.  You’ll also spot additional plants that are native to the Mediterranean, including citrus and Cypress trees, and mood setting grapevines.

Guests remaining late into the evening can take advantage of the area outside of the Italy Pavilion, facing the lagoon, as an excellent spot to view the nightly musical laser and fireworks show, Illuminations.

Jenni Ingersoll | Having been transplanted numerous times, I have learned to explore the sites around our new found hometown, uncovering hidden gems and attractions. When vacation time rolls around, I enjoy traveling with my family and the occasional weekend escape with my husband, coming home to share our travel experiences with others. You can follow me on Twitter @JAIngersoll. My top three destinations are Walt Disney World Resort, the Midwest and any beach I can walk along.

Next post: Happy Valentine’s Day from The Travelers Way