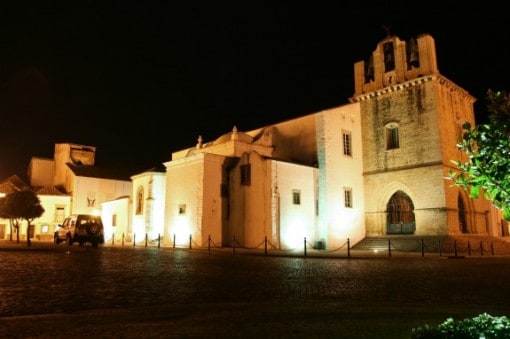 Faro is the southernmost city in the country of Portugal, and has been inhabited since the Paleolithic Age. Because of this, Faro has been settled many times by different groups of people, meaning you can find both Arab and Roman ruins in the city. Even if you aren’t a history buff, you’ll appreciate the intricate art and woodwork that can be found in many of the churches, not to mention that there are plenty of other attractions to enjoy in the area.

Next time you are in Portugal, put Faro on your to-visit list.  Here are a few of the top sites to see:

This museum is housed in a former 16th century Convent of Our Lady of Assumption, where you can see various archaeological finds from Medieval and and Roman times.

Faro Cathedral – The Faro Cathedral is located in the heart of the city, and is known for it’s orange tree lined walkways. It was originally built in the 13th and 14th centuries, and was the first Christian church to be constructed in the area.  Though there was considerable damage from the 1755 earthquake, inside the cathedral you will find intricate carvings, paintings, and decorated tiles known as azulejos.  Go to the top of the tower for panoramic views of the city and coast.

Igreja do Carmo – Built in the 18th century and located in Largo do Carmo square, Carmo Church has twin bell towers and features a Baroque style decor, religious statues, and paintings.

Igreja de Santo António – Located on the highest point in the city, the church was built in the 15th century and features paintings, pictures, and engravings honoring St. Anthony.

Igreja de São Pedro – This church was originally build in the Medieval times but was rebuilt in the mid-16th century. Don’t let the plain exterior fool you – the interior is decorated with 18th century azulejos and intricate woodwork.

Igreja da Misericórdia – Built in 1581 on the former Hermitage of the Holy Ghost site, the church is built based on the plan of a Greek cross and features some wonderful altarpieces.

Nossa Senhora do Carmo – The “Golden Church” of Faro is widely acclaimed to be best example of gold-leaf woodwork in southern Portugal. It also contains a chapel lined with the bones of over 1,000 monks.

The lagoon on which the nature reserve is found is the main reason that Faro has been inhabited since the Paleolithic Age. Ria Formosa was created by the massive earthquake in 1755 and is home to a variety of birds, fish, and other marine organisms. Besides bird watching, there are several walking trails around the nature reserve.

Because Faro is near the water, visitors can take boat trips and nature tours, diving trips, or work on their golf swing (Pinheiros Altos, San Lourenzo, Quinta do Lago, Vale de Lobo and Villa Sol are the closest courses). If you are traveling with the family, kids (and those young at heart!) might enjoy the go-karting complex Karting Almancil.

Faro is served by the Faro Airport which connects the city and region with the rest of Europe.  Flights from the United States will require a connection through one of the major European hubs.  Transfers are available from the airport to your hotel, and rental cars are also available.